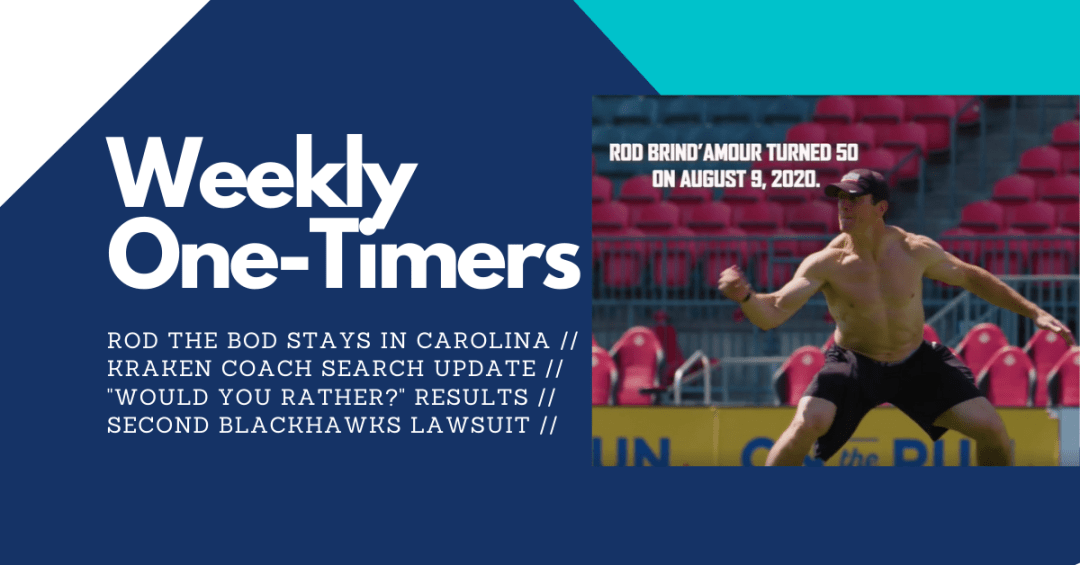 The dominoes are falling. With the Expansion Draft just over a month away and the semifinals of the NHL Stanley Cup Playoffs in full swing, things really are heating up in the search for the first head coach of the Seattle Kraken.

It has long been stated by Seattle Kraken general manager Ron Francis that the head coach hiring process hinges on who might be available after the conclusion of the NHL season. He has also held firm that the team hopes to have a coach in place by the end of the second quarter of the year.

Sure, there are still four teams playing, but the chances of the remaining coaches—Barry Trotz, Jon Cooper, Pete DeBoer, or Dominique Ducharme—becoming available are nil at this point. In a way, we’ve really crossed the “season is over” threshold, because the field of available coaches is set, barring any additional firings in the coming days. And as for the “second quarter” timeframe? Well, I’m no calendar expert, but I believe the second quarter ends in 12 days.

We at SOH believe that Rod Brind’Amour was the lynchpin of the “wait for who is available” hold-up and was absolutely Plan A for Seattle. Brind’Amour had been in dragged-out contract negotiations with the Hurricanes for months. So we surmised that Francis may have been hoping to lure the newly named Jack Adams Award winner away from the franchise and community to which he is so closely connected, even as it was continuously being reported that Brind’Amour was close to signing a new deal.

Sadly for the Kraken, it was announced on Thursday that Brind’Amour has signed a new three-year deal to stay in Carolina.

What’s Plan B for the Seattle Kraken head coach search?

We at SOH also think it is not a coincidence that news broke on Thursday that Rick Tocchet is being granted a third interview for the Seattle Kraken head coach position.

If Brind’Amour really was Plan A, then certainly Francis and his staff had been thinking through some other options in case Rod the Bod did end up keeping his rippling abs in Carolina.

Plan B is now being kicked into high gear. Tocchet, former head coach of the Arizona Coyotes, is an obvious fit for the role as well, so his progress through the interview process comes as no surprise. And what about David Quinn? Could he be given a shot?

Our own Jim Wilkie did a great rundown on all the candidates back in May, so give that a read to bring yourself up to speed on everyone who could be considered for the position.

Whether it ends up being Tocchet or somebody else, it does feel like a Seattle Kraken head coach hire is imminent.

The Kraken are continuing to demonstrate that they are well aware their market expands beyond the borders of Washington State. This week, the team announced a partnership with Bristol Bay Native Corporation. According to the release, “Bristol Bay will be prominently represented throughout Climate Pledge Arena on hundreds of TV screens and the arena’s LED rings for arena visitors, on the main scoreboards during televised games, at the state-of-the-art Kraken training center, and at one of the arena’s prime marketplaces.”

BBNC is a for-profit corporation that converts those profits into benefits for its shareholders. The mission of the organization is to encourage its shareholders to pursue educational opportunities and to promote and preserve cultural heritage.

“Would You Rather?” Round 2 results

This week, we had a second round of Expansion Draft “Would You Rather?” on soundofhockey.com. I gave John Barr a bit of grief for this one because by including a goalie in the field, even some light Googling could have revealed that Team 3 was clearly the Washington Capitals. But that’s neither here nor there.

Here are the results:

This is a terrible story, and one that is continuing to develop. The Chicago Blackhawks now face a second lawsuit for not properly addressing allegations of sexual assault by former video coach Bradley Dale Aldrich on a player during the 2009-10 season.

This new lawsuit comes from a former high school hockey player in Michigan and alleges that because the Blackhawks did not act on the aforementioned assault in 2009-10, Aldrich was allowed to remain in hockey circles. Aldrich later assaulted this new plaintiff in 2013 and was eventually sentenced to six months in jail and five years of probation for his crime.

It’s a tumultuous time in college hockey, with several programs—including Alaska Anchorage, Robert Morris, and Alabama Huntsville—either eliminating or suspending their programs. News that Augustana University in Sioux Falls, S.D., is attempting to add a Division I hockey program is certainly welcome.

Stephen Johns has been dealing with severe depression after repeated concussions ended his hockey career prematurely. He has decided to take control over his life and his mental health by embarking on a remarkable journey to rollerblade and road trip across the United States, making a movie about it along the way. Johns aims to “help others facing their own battles,” as he puts in countless “Mental Miles.”  Very cool.

The WHL has announced an October 1 start date, with a full 68-game season planned for all teams. The main caveat to this otherwise normal-looking season for the Dub is that there will be no crossover play between the Eastern Conference and Western Conference. Other than that, Everett Silvertips and Seattle Thunderbirds fans should be fully back in business this fall.

Is Jimmy Fallon just pretending to be a New York Islanders fan for attention? Friend of the Sound Of Hockey Podcast, ESPN’s Greg Wyshynski, investigates.

Ralph Maccio does come across as a true Isles fan, though, doesn’t he?