Who will be the Seattle Kraken’s first head coach? Take a look at the candidates 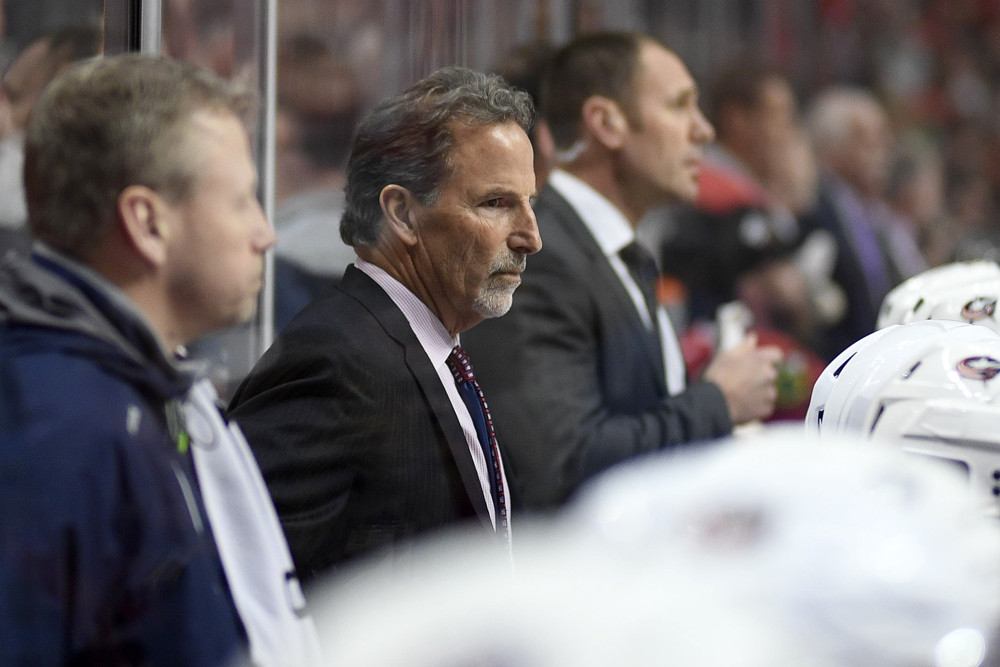 While general manager Ron Francis tries hard to keep his coaching search under wraps, it’s very likely that his top choices to become the Seattle Kraken’s first head coach are still under contract somewhere else.

Back in November, Kraken ownership reportedly gave the front office permission to hire a coach whenever it felt ready. Last month Francis said he expects a decision by the end of the second quarter and is patiently waiting to see in “the next month or two” who will be available (coaches looking for work, on expiring contracts or “other situations that may be looking to make a change,” i.e., soon to be fired). Clearly, if Francis’ first choice had already been available, the Kraken would have hired him by now.

Another quality that’s not necessary, but will certainly help, is Francis’ close ties and familiarity with coaching candidates. After playing 23 seasons in the NHL and working another 13 years in NHL front offices, Francis has accumulated quite a lengthy list of connections.

It’s been said we’re all linked to everyone else by six degrees of separation. But if you want the plumb NHL job as the Seattle Kraken franchise’s first head coach, good luck if you’re more than one degree removed from Francis.

Inasmuch as it would be refreshing to hire a new face instead of the usual suspects who end up being recycled around the league, Seattle will need a seasoned coach who can command respect and get results from a veteran-laden lineup. Comments by Francis back this up, and it would take an incredible audition and interview for a coach without NHL head coaching experience to blow away the Kraken.

The Stanley Cup Playoffs begin Saturday, and it would be nice to get the new coach involved on player assessments well ahead of the July 21 Expansion Draft. So here’s a rundown of the Kraken’s coaching candidates, divided into three groups: Francis connections, backup plans and longshots. NHL head coaching records are in parentheses.

Brind’Amour coached the Hurricanes to the Eastern Conference finals in 2019, the conference semifinals in 2020 and first place in the Central Division this year. Carolina’s 80 points are tied with Vegas for most in the NHL through Tuesday night. He is the first Hurricanes coach to make three consecutive playoffs and is a front-runner for the Jack Adams Trophy as coach of the year. Yet, Carolina has bewilderingly dragged out negotiations on a contract extension and might lose him after this season.

Recent reports have the two sides getting closer to an agreement, and Sportsnet’s Elliotte Friedman has said Brind’Amour won’t re-sign unless his coaching and training staff also get new deals. But the longer these negotiations take, the chances increase for the Kraken to swoop in and land the best man for their job.

Brind’Amour was Francis’ teammate on the Hurricanes from 2000-01 to 2003-04 and succeeded Francis as Carolina’s captain. He was also an assistant coach for Carolina when Francis held various front office roles, including GM and director of hockey operations.

In his second season as head coach, Stevens took the Flyers to the 2008 Eastern Conference finals but hasn’t won a playoff round since.

Stevens helped the Stars reach the Cup Finals last season, but they missed the playoffs this year. He’s been in charge of the forwards and the team’s 5-on-5 offense, which ranks 21st in the NHL with 101 goals.

Stevens was a member of the 1990-91 Hartford Whalers along with Francis.

Nelson played only three NHL games, but one of them was alongside Francis on the 1991-92 Penguins.

After playing many years in the minor leagues, Nelson paid his dues coaching in the American Hockey League and United Hockey League. Nelson served as a head coach for eight seasons in the AHL, winning the Calder Cup championship in 2017 with the Grand Rapids Griffins.

His only NHL head coaching job was on an interim basis for the Oilers after Dallas Eakins was fired 31 games into the 2014-15 season.

Nelson just completed his third season as an assistant coach for the Dallas Stars where he works on the power play with fellow assistant Derek Laxdal. The Stars’ power play ranks fifth in the NHL (23.6 percent) this season.

Tocchet was a formidable power forward in his playing days but hasn’t had close to the same success behind the bench. His only playoff appearance came during last year’s pandemic bubble where the Coyotes lost in five games to the Colorado Avalanche in the first round (though they beat the Nashville Predators in the play-in round).

Arizona dumped Tocchet on Sunday after four seasons. His reputation for what Friedman describes as “one of the best around at handling players that are not easy to reach” could get the attention of his former teammate on the 1992 Stanley Cup champions. Francis and Tocchet played together on the Pittsburgh Penguins from 1991-92 to 1993-94 and in juniors with The Soo.

Winnipeg was cruising nicely through most of this season, but a recent slump that had the Jets losing nine out of their past 11 games raises questions about Maurice’s job security. A quick playoff exit against the potent Edmonton Oilers just might bring an end to Maurice’s eight-season run in Winnipeg.

Among active NHL coaches, only Tampa Bay’s Jon Cooper has been in his current job longer than Maurice. Fair or not, the shelf life of hockey coaches doesn’t last very long.

Maurice is well-respected around the league, has his players’ backs, and won’t have to wait long for a new job if he hits the market. He coached Carolina when Francis returned to play for the Hurricanes/Whalers organization from 1998-99 to 2003-04.

Vellucci, now an assistant coach for the Penguins, coached the AHL Charlotte Checkers to the 2019 Calder Cup title. He also won an OHL championship in 2006-07 with the Plymouth Whalers where he coached for 13 seasons.

Francis and Vellucci were teammates on Hartford in 1987-88, and Vellucci served as assistant GM and director of player development in Francis’ front office with the Hurricanes from 2014 to 2017.

Gallant is high atop most everyone’s Kraken coaching list after he took the Golden Knights to the Stanley Cup Final in their first season.

Knowing how to squeeze the most out of a first-year expansion team is invaluable. But he’s been unemployed for a little more than a year. If the Kraken really valued and wanted Gallant, they could have landed him by now. Being perceived by some as unwelcoming toward analytics doesn’t help his case with the progressive-minded Kraken either.

Winning a Stanley Cup with the Red Wings and two Olympic gold medals with Canada speak for themselves. But Babcock’s history of mind games and questionable treatment of some players can’t be brushed aside. That and the $5.875 million per year he’s being paid to not coach the Maple Leafs through 2022-23 will likely be tough obstacles to overcome.

Green’s Canucks improved every season until a sudden regression had them miss the playoffs this year. Vancouver’s surprising run to the 2020 Western Conference semifinals was probably more indicative of Green’s abilities than this year’s COVID-19 train wreck. Green’s contract ends after this season, and the Canucks’ baffling indecisiveness in re-signing him could end up sending a rising coaching star to Seattle.

Boudreau told The Athletic earlier this year that he wants the Kraken job.

In his favor, the longtime coach has never had a losing season in the NHL and worked with Kraken director of hockey strategy and research Alex Mandrycky in Minnesota. Boudreau hasn’t won a playoff round since 2015, however.

We’ll have to see if the Kraken want Boudreau.

Julien won a Stanley Cup with the Bruins in 2011 and took them to the Cup Final again in 2013. But he hasn’t won a playoff round since 2014 and an emergency heart procedure caused Julien, 61, to miss part of the Canadiens’ 2020 postseason. Montreal fired him 18 games into this season after he couldn’t pull the team out of an early slump.

If the Kraken really like to do things differently, then hiring Gronborg would fit that model perfectly. The former national team coach for Sweden just completed his two-year deal with the ZSC Lions of the Swiss National League and reportedly has designs on landing an NHL job. New Jersey pursued him last year before hiring Lindy Ruff, and we can expect Gronborg’s name to be linked to more NHL coaching rumors.

Gronborg, who was an assistant coach for the WHL’s Spokane Chiefs in 2004-05, has won two World Championships and 16 medals for Sweden. It’s only a matter of time before he becomes the third European to coach in the NHL.

Fresh off being fired Wednesday by the Rangers, Quinn should land a second chance somewhere after MSG chairman James Dolan got impatient with the team’s rebuild. Quinn’s background in college hockey (Boston University) sets him up better to work with younger players.

Longshots to be Kraken coach

Tortorella won a Stanley Cup with the Lightning and has had impressive results nearly everywhere he’s coached. But his old-school style and abrasiveness wouldn’t be a good fit in a new market. The Kraken coach needs to be on board for selling hockey to new fans, and Torts’ frequent condescending or curt responses to questions from the media won’t help.

In one of his first moves as Hurricanes GM in 2014, Francis fired Muller after he missed the playoffs for a third consecutive season. Have assistant and associate coaching gigs with St. Louis and Montreal since then made Muller better suited to lead an NHL team?

Since he was fired by the Flyers, Hakstol has spent the past two seasons as an assistant coach with Toronto. He oversees penalty killing, which ranks 26th (79.9 percent) in the NHL. He never got out of the first round in two playoff appearances with the Flyers, but the former University of North Dakota coach could get another shot at a head coaching job in the NHL.

Hakstol and Francis worked together on Team Canada when Hakstol was an assistant for Alain Vigneault’s coaching staff at the 2019 World Championships.

Francis’ longtime pal from the Whalers and Penguins is now an assistant coach with the Florida Panthers, after he worked two stints as a Kraken scout.

Samuelsson first left the Kraken to become head coach of Leksands IF of the Swedish Hockey League in 2019-20. He previously coached MODO in Sweden for two seasons and was 39-29-8 as head coach of the Charlotte Checkers, Carolina’s AHL farm team, in 2016-17 when Francis was Hurricanes GM.

Francis has obviously aided Samuelsson’s coaching aspirations, but can the Kraken GM objectively determine if Samuelsson is ready to be an NHL head coach?