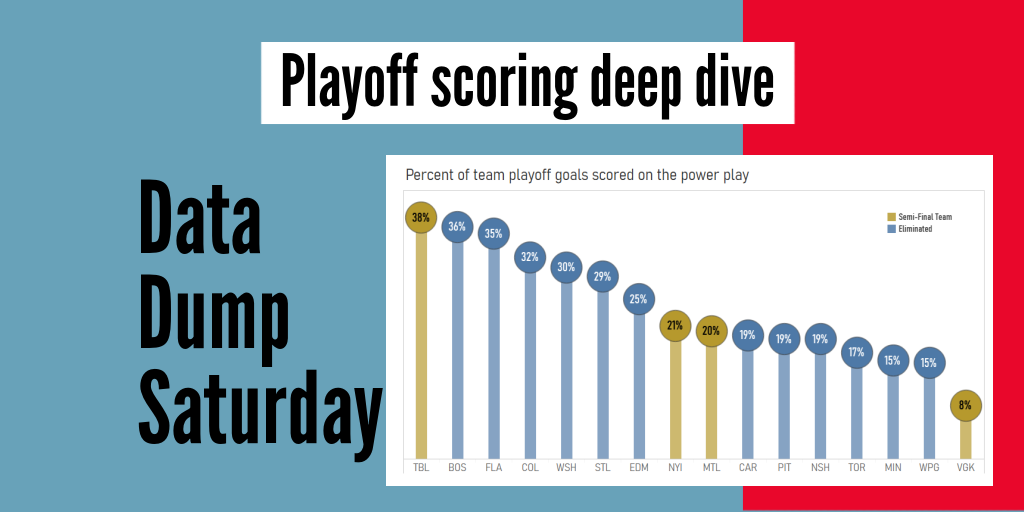 For this week’s Data Dump Saturday, I wanted to take a deep dive into playoff goal scoring. We often hear tidbits from hockey media on scoring, but rarely are we given context, so I thought it would be a fun topic to explore.

It is far more difficult to score in the playoffs given greater parity in the team matchups. A basic look at average goals scored by season proves that out.

One disclaimer on the above, the disparity between playoffs and regular season is bigger than the visual illustrates since this is per game and NOT per 60 minutes. There tends to be more overtime in the playoffs, therefore there are more minutes per game.

Another way to look at the difference between playoff and regular-season scoring is by looking at the shooting percentage.

The shooting percentage goes down in the playoffs for a couple reasons. First, teams are playing their best goalies as much as possible, if not exclusively. Second, qualifying teams represent the best squads in the league and scoring against them is often more difficult than against the teams that did not qualify for the playoffs.

When Jan Rutta scored in the third period of Game 2 of the semifinal series between the Tampa Bay Lightning and the New York Islanders, it was the first goal scored by a Lightning defenseman in the 2021 Stanley Cup Playoffs. That game was the thirteenth game for Tampa Bay in the playoffs, and one defensive goal every 13 games is well below average gap in games with a defensive goal. I immediately began to wonder if it is becoming more challenging for defensemen to score in the playoffs compared to the regular season.

I am not prepared to make any hard and fast conclusions, but it certainly seems like the trend in the playoffs is a steady decline in scoring by defensemen with only 12% thus far of 2021 playoff goals scored by defensemen.

If we look into the shooting percentage by defensemen, we see they are less effective than they have been in previous years.

Again, the 2021 playoffs could be a random anomaly and does not mean that teams should stop valuing scoring defensemen, but it is something to keep an eye on.

Power play scoring in the playoffs

The last segment I want look at is power play scoring in the playoffs versus the regular season. We have already established that there are more penalties called in the Stanley Cup Playoffs, thus leading to more opportunities for power play goals.

What I would like to understand is if power play goals account for a higher percentage of all goals scored during the playoffs versus the regular season.

As the visual shows, power play goals represent a higher percent of the goals scored in the playoffs compared to the regular season.

It is amazing to see the difference between Tampa Bay and Vegas right now with 38% of Tampa’s goals coming on the power play versus Vegas’ 8%.

I hope this gives you some more insights on goal scoring in the playoffs and adds context to the comments we hear during the television broadcasts. If you have any questions or have an area you want me to dig into, let me know in the comments section or contact me on twitter.