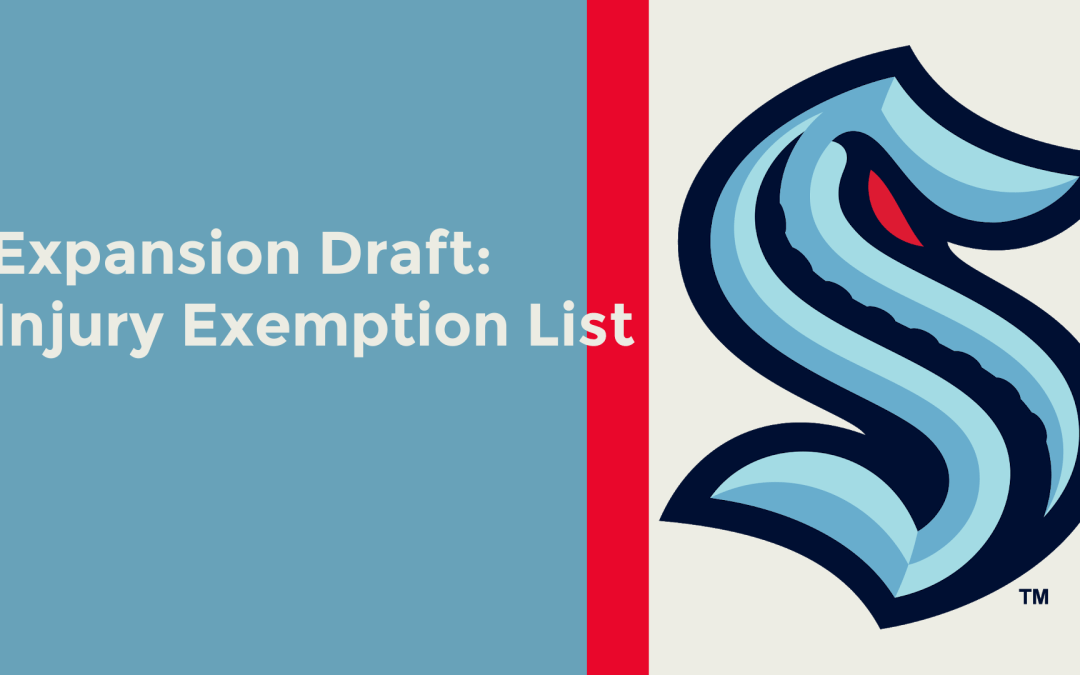 The NHL distributed the injured reserve exemption list for the NHL Expansion Draft yesterday. We took a peek to identify any surprises and impacts to the Kraken. This list identifies any players with potential career-ending injuries who have missed more than the previous 60 consecutive games (or who otherwise have been confirmed to have a career-threatening injury).

These players are deemed exempt from selection in the Expansion Draft.

The one notable callout on the list is Brent Seabrook. The Chicago Blackhawks dodged a bullet with Seabrook announcing his retirement earlier this season. Seabrook had a full no-movement clause (NMC) in his contract that would have required Chicago to protect him in the Expansion Draft. This would have exposed a quality defenseman to Seattle. Seabrook was a wonderful player in his prime, but his most recent quality of play – thanks largely to injuries – would not have warranted protection in the draft.

None of the other names on the list should come as surprises since most of them have either announced their retirement or have not played in the league in several years.

Two names we were keeping an eye for the injury exemption list were Jonathan Toews and Oscar Klefbom. What should be considered good news for Seattle, neither of them were on the exemption list.

Jonathan Toews and the Chicago Blackhawks

Toews missed the entire 2020-21 season for the Chicago Blackhawks after announcing that he has an undisclosed condition that leaves him “feeling drained and lethargic.” The fact that he is not on the long-term injured reserve list should be considered good news for his return. Toews also has a full NMC that requires Chicago to protect him in the Expansion Draft.

Here is a look at the Expansion Draft projections for the Chicago Blackhawks:

Chicago does not have many quality options for the Kraken to choose from, so the mandated protection of Jonathan Toews is low impact for the Blackhawks.

Oscar Klefbom and the Edmonton Oilers

The Oilers situation is very interesting. Oscar Klefbom missed the entire 2020-21 season recovering from shoulder surgery. As recent as April, Klefbom has cast a bit of doubt on his ability to recover and play in the NHL again. A healthy Klefbom would be protected, but the Oilers are now forced to decide between protecting a rehabbing Klefbom or a much younger Caleb Jones.

Here is a look at the Expansion Draft projections for the Edmonton Oilers:

I am still projecting Klefbom as protected and feel that the doubt cast by his long-term recovery is a bit of a ruse to get Seattle to steer clear of him, should he be available. If Klefbom is exposed, I believe the risk is well worth the potential reward. Outside of the Klefbom/Jones scenario, I do not feel the Oilers have much to offer the Kraken in the Expansion Draft.

Now that the injured reserve exemption list is published, we are one step closer to the final protection lists and are now less than 30 days away from the Expansion Draft. Buckle up!