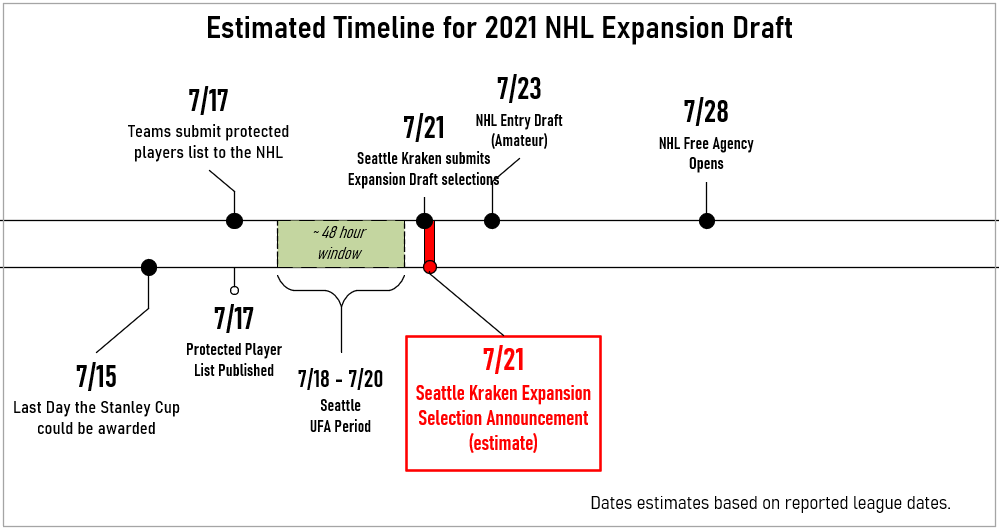 Now that the NHL Entry Draft is done, and the bulk of the NHL Free Agency period is complete, we can officially start zeroing in on how teams might approach the Seattle Kraken NHL Expansion Draft next summer. There will certainly be roster moves between now and that momentous event, but those changes will pale in comparison to the volume of transactions we’ve witnessed over the past three months.

Here at Sound Of Hockey, we will be going through every team over the next few weeks to project who will be protected and who might be targeted by the Kraken, and we will look to uncover all the nuances that come with the Expansion Draft.

Before we start, let us walk through Expansion Draft rules. 30 of the 31 existing NHL teams will be participating, with the exception being the Vegas Golden Knights, who are exempt. Each team participating will lose one player to the Kraken.

Seattle must select one player from the 30 participating teams. They are required to select at least 14 forwards, nine defensemen, and three goaltenders. That would leave four additional players for the Kraken to choose for whichever position they see fit. Additionally, 20 of the players selected must be under contract for the 2021-22 season, and the aggregate salary cap hit must be between 60 and 100 percent of the 2020-21 upper limit of the cap.

Existing clubs will be able to protect either:

Any player with a full No-Movement Clause in his contract must be protected unless said player waives his NMC, which was not common in the 2017 Expansion Draft.

Players with two or fewer seasons of pro hockey experience in North America, either AHL or NHL, are automatically exempt from the Expansion Draft and therefore do not need to be protected by their teams. There is also a threshold of 10 games that needs to be exceeded to count as a season of pro hockey.

A good example of this will be Quinn Hughes. Hughes only played five games in 2018-19, and thus that season will not count as a pro season. Since he played more than 10 games in the 2019-20 season, he can play the entire upcoming season with no significant injuries, and he will still have only two completed seasons when the Expansion Draft occurs, making him exempt.

As part of their requirements, the 30 teams participating in the Seattle Kraken Expansion Draft must expose two forwards and one defenseman that are under contract for the 2021-22 season. These players are required to have played 40 games in the 2020-21 season or have 70 or more NHL games over the 2019-20 & 2020-21 seasons combined. Similarly, teams must expose a goalie that is either under contract in 2021-22 or a restricted free agent following the 2020-21 season.

Worth noting, we highly anticipate that the games played requirements for forwards and defensemen will be adjusted down due to the 2019-20 season being abbreviated and the likelihood that the 2020-21 season will also be shorter than the usual 82 games.

Players with potential career-ending injuries who have missed more than the previous 60 consecutive games may not be used to satisfy a team’s player exposure requirements unless approval is received from the NHL. These players will be deemed exempt from selection. Ryan Kesler would be a good example of a player that fits in this category. Due to injuries, Kesler has not played a game since the 2018-19 season and is unlikely to take the ice next season, even though he is under contract until 2022. In this scenario, Kesler cannot be used to fulfill one of the spots in the two-forward exposure requirement.

To get some insight on how the Seattle Kraken Expansion Draft may play out, we can look back at the 2017 Expansion Draft because the rules were identical for the Vegas Golden Knights.

Here is how NHL teams chose to protect their players, either via the seven forwards, three defensemen, and one goalie scenario, or via the eight total skaters and one goalie route.

This is how Vegas drafted its players across positions.

As a reminder, the minimums for forwards and goalies was 14 and three respectfully, thus Vegas used all four of its position agnostic picks on defensemen.

The Rest of the Story

It gets more complicated. Another part of the Expansion Draft will be the trades that occur before, during, and after the event. Predicting these scenarios will be downright impossible without insider information up until the very moment the Kraken submit their picks to the league. A lot of this will involve wheeling and dealing by teams to try to manage their cap space, so here are some of the terms and scenarios you should be aware of before the Expansion Draft.

There will be several players exposed by their teams that will be “Pending Unrestricted Free Agents” (UFA). The scenario is that a player will have just played the last year of his NHL contract with his team and will become an Unrestricted Free Agent roughly one week after the Expansion Draft. The Kraken will have a 48-hour window before their selections are made to talk and negotiate with any of these UFAs. An example here is where a player like Taylor Hall is left unprotected by Buffalo. Seattle could discuss a potential contract term for a new deal with Hall. If they reach an agreement, Seattle would then choose Hall in the Expansion Draft. If they cannot reach a deal, Seattle would find some other player to select from Buffalo.

This is a scenario where Seattle would draft a player that they know will become an Unrestricted Free Agent on ~July 1st (or a week after whenever the Expansion Draft actually happens). This would imply no actual intention of signing this pending free agent. This would come into play if the Kraken do not see any other notable assets on the NHL team’s roster, but selecting this UFA would fulfill the rule of selecting one player per team. Vegas did this with three players: Chris Thorburn (WPG), Connor Brickley (CAR), and Jean-Francois Berube (NYI).

In this scenario, the Kraken more than likely would have a predetermined arrangement with another NHL team that if Seattle chooses Player X on Team A, then Team B would trade assets (either players from Team B or picks for the Amateur Draft) to Seattle for Player X. After the Vegas Expansion Draft there were four players that were immediately traded to another NHL team, literally being jettisoned the following day. Alexei Emelin (MON -> NSH), David Schlemko (SJS -> MON), Marc Methot (OTT -> DAL), and Trevor van Riemsdyk (CHI -> CAR) are in this category.

This is where Seattle would negotiate terms of their player selection with each respective team in advance. An example of this was when Anaheim agreed to trade Shea Theodore to Vegas if Vegas selected Clayton Stoner in the Expansion Draft. Clayton Stoner was injured and would never play another NHL game. Theodore was a young, up-and-coming defenseman for Anaheim. Vegas gets a young prospect, while Anaheim would get the Clayton Stoner contract and financial commitment taken off their books.

Side deals in the Expansion Draft netted the Golden Knights an additional six players, 10 Entry Draft picks, and signing rights to one player. The media narrative going around is that teams will be less wiling to do these side deals with Seattle, but with a flat salary cap expected over the next few seasons, you can imagine that teams will be forced to unload some contracts to remain cap compliant.

We hope this gives you a good overview on what to expect in the Expansion Draft scenarios as the Kraken get closer and closer to selecting their team. There is no doubt NHL rosters will change before summer, 2021, but we can start to circle some players on teams that may be candidates, and that is exciting stuff.