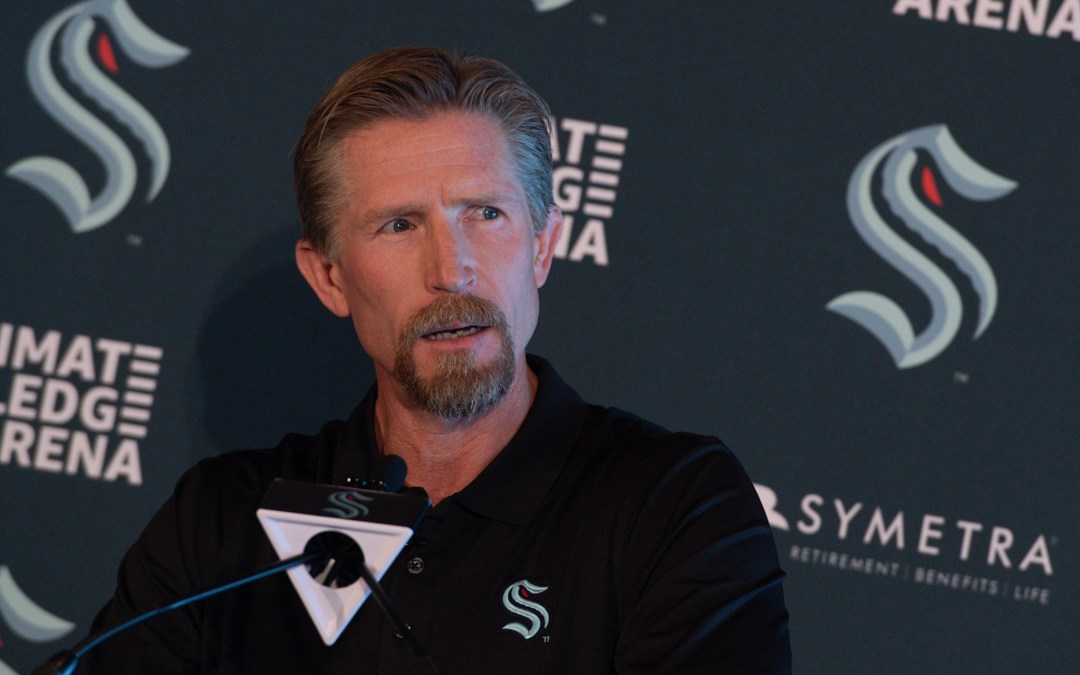 SEATTLE – After keeping the name under wraps amidst a tempest of rumor and speculation, the Seattle Kraken announced Thursday morning that Dave Hakstol would become the first head coach of the expansion franchise.

Hakstol, 52, spent the last two seasons as an assistant with the Toronto Maple Leafs after four-plus seasons as the head coach of the Philadelphia Flyers. Once in town, he and his family were introduced to the Seattle media at a press conference held at the Edgewater Hotel.

“It’s been a little bit of a whirlwind, but what a great whirlwind,” Hakstol said.

The Kraken did an outstanding job keeping Hakstol’s name a secret. Over the past few months, names like Rick Tocchet, Joel Quenneville, Gerard Gallant, Kevin Dineen, Tony Granato, and Joe Sacco had emerged as potential candidates to take the job. Nobody mentioned Hakstol’s name until Thursday morning.

It’s surprising because Seattle general manager Ron Francis says that the team’s first discussions with the new coach began last summer. The seed may have been planted long before, however.

“In 2019 with Hockey Canada, I was part of the management team and Dave was part of the coaching staff,” Francis said. “We got to spend four weeks together over in Austria. I got to know him as a person and kind of watch his work ethic and how he operated… as we went through the process, he was certainly a guy that I had an interest in talking to.

“He’s been in the league for six years, he’s worked with some different coaches in getting a lot more experience. I like the way he communicates his message and I know he cares about his players. So all those things made it the right choice for me as a coach.”

Hakstol’s coaching career began in the USHL when he took over mid-season for the struggling Sioux City Musketeers in 1996. The team only won eight games that first year, but Hakstol would quickly turn the franchise around, and over the next three campaigns he had a 96-53-11 record.

He would leave the USHL to become an assistant coach for his alma mater, the University of North Dakota, in 2000. He spent the next three seasons as an associate coach before being named head coach in 2004. For the next 11 years, Hakstol guided North Dakota to winning records, topping a .600 winning percentage every season, while reaching the Frozen Four seven times.

That led to Hakstol being hired in 2015 by the Philadelphia Flyers, making the jump from college to the NHL. In Philadelphia, Hakstol brought the Flyers to the playoffs twice – in 2016 and 2018 – before being let go early into the 2018-2019 season. He compiled a 134-101-42 overall record with the Flyers.

“I think there’s a lot of guys who have gotten that second chance and really take advantage of it,” Francis said.

Hakstol’s second chance comes after two seasons of looking at the coaching position from a different angle.

After spending time as an assistant in college, he again lived the assistant life for two NHL seasons under Mike Babcock and Sheldon Keefe in Toronto. That experience will be added to his prior time as a head coach as he takes over in Seattle.

“It definitely brings a different perspective,” Hakstol said of his Toronto experience. “You know, it’s a different routine and rhythm within your daily organization, no question about that, but it’s also a little different perspective with the players. I had an opportunity to work with two outstanding coaches with both Mike and Sheldon in Toronto as well as the other assistant coaches that were there. The people surrounding you, you take a piece from.”

With the July 21 Expansion Draft a month away, he plans on hitting the ground running. Hakstol will put together a coaching staff and begin to prepare for players coming on board. There will not be a lot of time, as after the Expansion Draft the team will have just a couple of short months before training camp opens in September.

What is Hakstol going to do now that he’s officially the first coach of the Kraken?

“Don’t waste a day,” he said. “There’s a ton of work to do and we don’t have any time to waste there. It’s not waiting until training camp to begin putting our team together, it’s building relationships with players immediately (after the Expansion Draft) so we have to be ready to go.”