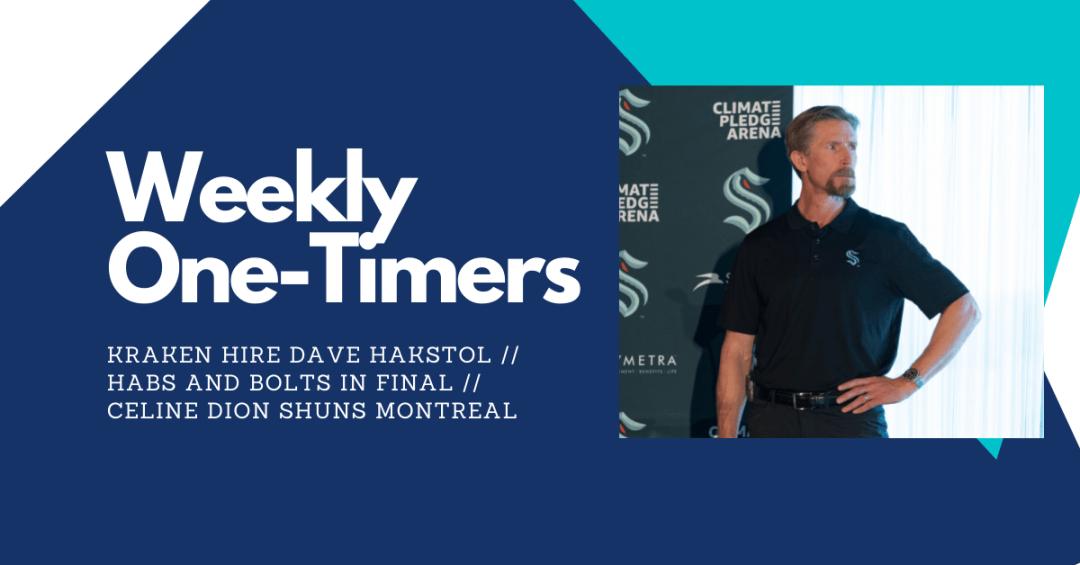 This felt like the last big pre-we’re-a-real-team milestone, didn’t it? Kraken general manager Ron Francis has been maintaining for MANY months that the organization’s hiring plan for its first head coach was to wait for the end of the NHL season to see what options were available. The second piece of the plan was to have the coach in place by the end of the second quarter of 2021. With just six days to spare before that self-imposed deadline, the team finally did the damn thing and hired Dave Hakstol as the first coach in Seattle Kraken franchise history, just as absolutely nobody anticipated.

Why Dave Hakstol was never really considered a candidate to be the first Seattle Kraken Head Coach is anybody’s guess, but the best way we can explain it is… well… nobody ever really asked if Dave Hakstol was a candidate. He certainly ticks the boxes of being somebody with NHL head coaching experience and also somebody who believes that analytics are a useful tool for teams to evaluate and improve. He also—despite being fired by the Flyers after four seasons—had a winning record in Philadelphia and took a relatively young team to the playoffs twice.

And being that he just wrapped up a two-year stint as an assistant coach in hockey-crazed Toronto, how did Hakstol and the Kraken manage to keep his name out of the rumor mill all the way until Thursday morning?

“Actually, we didn’t do anything—I would think—extraordinary,” Francis said during Hakstol’s introductory presser on Thursday. “We first talked to Dave last year. I mean, it’s an interesting process because sometimes you talk to teams, and they request that you keep it quiet. At the time, Dave was employed by Toronto so you certainly don’t want that out there as a distraction as he’s coaching with the Leafs.”

Francis added, “So you know on our end, we just had the conversations, we talked about things, and I think a lot of that credit goes to Dave. He just didn’t talk about it to anybody and when you don’t do that, it doesn’t get out there. So, as I said, we had multiple conversations, and it was able to be kept sort of in house until this morning.”

As far as introductory press conferences go, it really was a good one. Hakstol carries himself as somebody who perfectly fits the mold of what the Kraken were seeking. He looks and sounds like a coach who has been here before, and he’s excited for—but also humbled by—the opportunity to lead an expansion franchise as its first-ever bench boss.

We at Sound Of Hockey were certainly surprised by the hire, but we dig it. Let us know what you think about Dave Hakstol as the first Seattle Kraken head coach!

Sure, everybody had the Tampa Bay Lightning and their “$18-million-over-the-cap” payroll in the Stanley Cup Final. But there cannot have been too many brackets out there that featured the Montreal Canadiens as one of the two last teams standing.

It’s hard to even explain how the Habs have gotten to this point. They still are not and never have been the best team in this tournament, but they’ve played the style of hockey that gets it done in the playoffs and have done so to near perfection. Outstanding team defense. Clutch scoring. Elite goaltending. That’s the formula.

Meanwhile, the Bolts return for a chance at a second-consecutive swig from Lord Stanley’s Cup.

It’s funny how the tides of public perception turn so quickly when your team wins. It felt like everyone was pulling for Tampa Bay in last year’s bubble, and now they feel like this evil empire, just toying with the hearts and minds of hockey fans everywhere.

Following suit in the semifinals, America really appeared to be cheering for the Islanders, who were impressive again this season. Barry Trotz’s troops gave everything they had to try to find an equalizer in Friday’s Game 7. But remarkably, potential future Seattle Kraken Yanni Gourde’s short-handed tally early in the second period was enough to skate Tampa Bay back into the Final.

Game 1 of the Stanley Cup Final gets underway Monday at 5 P.M. on NBC Sports, not the main network. Based on their schedule, it would appear that local news, Wheel of Fortune, Jeopardy!, and American Ninja Warrior take precedent over the Stanley Cup Final. NBC has officially mailed it in. We are very ready for the NHL’s new TV partners to take over.

Look who’s back in the fold for the Canucks!

Man, I sure hated these guys in my formative years as a Minnesota Wild fan, but now that I live so close to Vancouver and have had a glimpse at how much they mean to that city, I get it. It really does make a lot of sense for Henrik and Daniel Sedin to be employed by the team with which they became so synonymous over their playing careers.

The Sedins have been hired as special advisers to the general manager, which gives a real “Assistant TO the Regional Manager” vibe. Hopefully for Vancouver fans, the twins can kickstart the team’s seven-year plan, which is now entering its eighth year.

Twitter had a couple funnies about the simultaneous hirings that we thought were worth sharing.

As the NHL Stanley Cup Semifinals reached their respective boiling points this week, Celine Dion may have pushed the city of Montreal over the edge, had the Habs not ultimately won the series.

The Quebec native and French Canada’s favorite daughter appeared in a pre-game hype video on the Jumbotron (do we still call them Jumbotrons?) at T-Mobile Arena in Las Vegas sporting heavy makeup, a Vegas hockey helmet, and [gasp!] a Golden Knights jersey.

How could you, Celine?

There are some conspiracy theories out there that the photo was doctored, but we will continue to investigate this very important topic.

Anyway, the Canadiens won the game and eventually the series, so Habs fans’ hearts will go on.

The local WHL squads released their full schedules this week for the 2021-22 season. Both the Everett Silvertips and Seattle Thunderbirds will play their home openers against the Portland Winterhawks on Oct. 8 and 9 respectively. The Silvertips Preseason Classic, which did not take place in 2020-21 will return this season, starting on Sept. 10.

Congratulations to our good friend, Ryan Hardy, who was hired by the Toronto Maple Leafs to join their front office in a role to be determined. Hardy built the Chicago Steel of the USHL into an absolute powerhouse organization and is a hilarious and generally awesome dude. Well deserved.