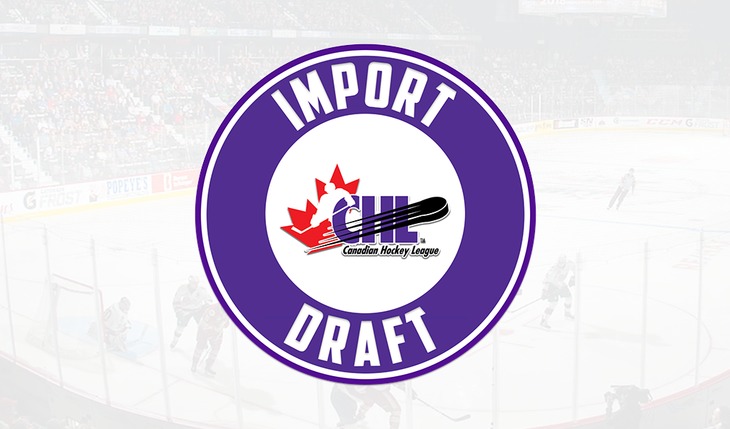 In a sign that we are somewhat returning to normal, the Canadian Hockey League held its annual Import Draft Wednesday morning. Both Puget Sound WHL teams, the Everett Silvertips and Seattle Thunderbirds, made selections to stock up on talent for the upcoming season.

While the draft was back, there were some differences this year.

The Import Draft usually occurs after the NHL Draft, but this year happened a month prior. Instead of selecting the draft order by reverse season record, the CHL held a lottery to determine order. Everett won the lottery among WHL teams and held the second overall pick.

All 60 CHL teams – including the WHL, OHL, and QMJHL – participated in the two-round process. CHL teams are allowed two imports on their roster at any one time. Both the Silvertips and Thunderbirds had import slots open so both made selections in the draft.

Players drafted are not required to play in the CHL, which means recruiting of these Import Draft picks is now underway.

Here is a closer look at who the Silvertips, Thunderbirds and the rest of the US Division selected Wednesday.

In his first action since adding general manager to his job title, Everett head coach Dennis Williams made one pick in the Import Draft.

The Silvertips played last year without imports but were hoping they would see Kasper Puutio and Michal Gut back in the fold. Puutio was drafted in the fifth round of the 2020 NHL Draft by the Florida Panthers and signed a pro contract with KalPa Kuopio in Finland, so he will not be returning to the Silvertips. Gut is expected back, though, which is good news for Everett after he scored 13 goals and 36 points for the Silvertips in 2019-2020.

The Silvertips drafted a 2021 NHL Draft eligible forward with a lot of size working for him. Huuhtanen is ranked 49th among European skaters by NHL Central Scouting and is coming off a year where he scored 20 goals and 34 points in 37 games for a U20 Tappara team in the Finnish U20 SM-sarja league. Huuhtanen also represented Finland at the U18 World Championship this past spring where he notched a pair of goals and five points in seven games.

Scouts say he has a nose for goal scoring and possesses a heavy and strong wrist shot. His strength lies more working in the cycle rather than off the rush, and he has some room to approve his skating ability. If he signs with Everett, he’ll be a load to handle down low, behind and in front of the net.

Here’s a glimpse of how deadly that wrist shot can be:

The Silvertips have some offense to make up for with Cole Fonstad and Gage Goncalves both moving on this coming season. Huuhtanen signing and being a productive player could help in that endeavor.

Seattle also went without any imports this last season. In the offseason, the Thunderbirds acquired Russian forward Vladimir Alistrov from the Edmonton Oil Kings for defenseman Simon Kubicek. They also had selected defenseman Samuel Knazko from Slovakia in last year’s Import Draft.

According to general manager Bil La Forge, Alistrov will be playing in the KHL this coming season while Knazko, who was drafted and recently signed by the Columbus Blue Jackets, has chosen to play professionally in Finland this season.

So, with no imports incoming, the Thunderbirds made two selections Wednesday.

With their first pick, 41st overall, Seattle took an Italian forward in Alessandro Segafredo and followed with a right-handed defenseman from Great Britain, Leon Okonkwo Prada with pick 86.

Seattle went with a younger pick with their first selection with Italian winger Segafredo. He’s set to turn 17 in September which means he would not be eligible for the NHL Draft until 2022. He played for a number of clubs last season, including the Zurich Lions U17 team where he appeared in 26 games and scored 25 goals, 27 assists, for 52 points. He also got into 24 games with the U20 team and added 10 more goals and 11 points.

If he were to sign, Segafredo would join what is becoming a crowded forward group for the Thunderbirds. Seattle can return all but one of the forwards it deployed last season which would make for some interesting personnel decisions for La Forge.

It’s not often that a British player comes over to play in the WHL, and for Seattle, Prada would be the first. A big defenseman with a bit of grit to his game, Prada didn’t put up huge numbers with the Swedish Rogle BK J18 last year. However, two years prior, in a U18 league he put up 21 points in 27 games for the R8 Hockey Academy. The aforementioned grit showed up as well as Prada was penalized 32 minutes in those 27 games.

Like Segafredo, Prada joins a position group that is crowded. Seattle’s defensemen from last season are all eligible to return this coming season.

The rest of the U.S. Division import picks

With Swiss Simon Knak, who was second in team scoring last year, set to return to Portland this year the Winterhawks made one import pick Wednesday. With the 26th pick overall they selected Czech left defenseman Marek Alscher to join their young blue line.

The Americans made one pick in the draft last year with Czech Republic goalie Tomas Suchanek, who did not play in the WHL. At pick 57 this year they selected a U18 World Championship teammate of Suchanek, forward Petr Moravec. Eligible for the 2021 NHL Draft, Moravec is ranked 82nd among international skaters by NHL Central Scouting.

The Chiefs made two selections Wednesday. At pick 17 overall they selected big, 6-foot-3 defenseman Timofei Kovgorenya, from Belarus. Kovgorenya is 17, a right-handed defenseman who played last year for Minsk Bison in the Vysshaya Liga.

At pick 117 Spokane selected 17-year-old German center Yannick Proske who played for his home country in the U18 World Championship.