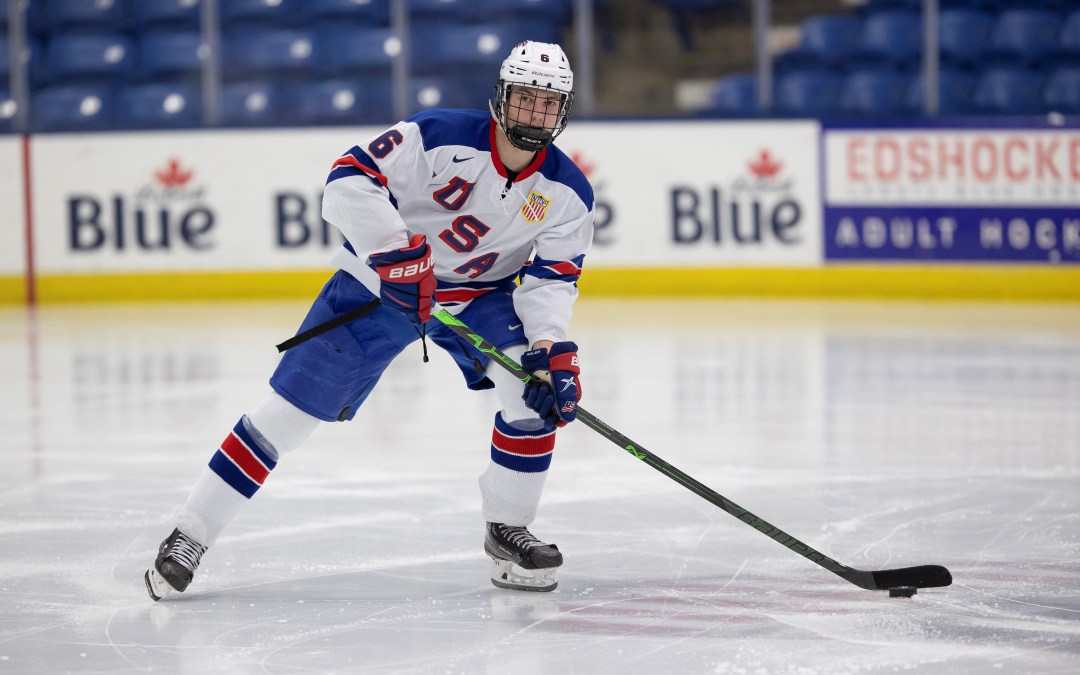 One of the most important pieces to any hockey team is a high-end defenseman. Every successful club has at least one guy who can move the puck, join the rush, and pile up points from the back end. In a class that features a number of such defenders, Luke Hughes is among the best, and there’s an outside chance that the Seattle Kraken call his name at the NHL Entry Draft on July 23.

If the last name Hughes sounds familiar, it should. Luke is the youngest of the Hughes brothers, all of whom were drafted with top-ten picks. Quinn Hughes was selected by the Vancouver Canucks with the seventh overall pick in 2018, while the New Jersey Devils took Jack Hughes first overall in 2019.

That is quite the track record for the Hughes clan and the case could be made that they are the new American hockey family – move aside Tkachuks.

Like Quinn, Luke is an exciting defenseman who can skate and control the puck. He’s had the fortune of watching and learning from both of his NHL brothers. That has been a big boost for Luke during his NHL Draft season.

“They kind of taught me going into the year that you got to be ready for everything,” Hughes said during the NHL’s Top Prospect media availability this week. “You’ve got to stay level-minded and you can’t get too high or low all through the year. And I think that really applies to me this year with all the COVID implications and getting shut down and quarantined at numerous times throughout the year. So, that was one big piece of advice they gave me.”

Hughes spent the season playing with the United States National Team Development Program (USNTDP) but suffered a lacerated tendon in his foot that kept him from playing in any postseason tournaments.

He is healthy now and hoping to continue following in his siblings’ footsteps. Both Quinn and Jack played for the USNTDP on their way to the NHL and Luke will follow Quinn’s path as he has committed to play for the University of Michigan next season,

“I’m super excited to go to Michigan,” Hughes said. “I think you guys know we’re going to be a really good team next year and hopefully we can go pretty far and try to win it all. So, I’m super excited for my time and I think watching my brother Quinn go through it and how much he grew up as a player, but more as a person just to meet really smart people and make longtime friends… I’m really excited for that.”

Michigan’s Owen Power, Matty Beniers, and Kent Johnson will all be selected early in this year’s draft and all could potentially return to play for the Wolverines next season. Add a Luke Hughes to that mix and the Frozen Four will be in reach.

But that’s for next season. What we care about is the draft and where Hughes will be selected.

“I think every year you’re trying to get better at something, but you know, right now I’m trying to just work on all aspects of my game so I can dominate at the next level,” Hughes said.

Luke Hughes by the numbers

Listed at 6-foot-2 and 176 pounds, Hughes spent last year with the USNTDP U18 club, which also gave him time competing in the USHL. He appeared in 38 games with the U18 team and scored six goals while adding 28 assists for 34 points.

He burst on the scene and started garnering attention during the 2018-19 season with the Little Caesars 15U team. Hughes posted monster, video-game-like numbers there, piling up 83 points, and 22 goals, in 71 games.

While an injury kept him from participating in the U18 Championships this spring, he did play for the US in the U17’s the prior season, scoring a goal and three assists in six games.

He says that the injury that kept him out of the U18’s is healing, and he’s set to attend the US’s World Junior Summer Showcase. It’s expected that he would make that roster and appear at next winter’s tournament, again following in his brothers’ footsteps.

“I’ve been skating for five weeks now, and I’ve been working out for like eight or nine, so I feel really good,” Hughes said about his injury. “I’m almost 100 percent… I finished rehab and there’s no problem with the toe. It feels great and I’ll be ready to go.”

What the scouts say about Luke Hughes

Hughes has been consistently ranked among the top five prospects for the upcoming draft. NHL Central Scouting has him slotted as the fourth-best North American skater. He’s been ranked as high as third and as low as 11th in the various online draft rankings.

Scouts focus on his skating and ability to handle the puck. He’s the type of skater that will draw defenders to him which frees up space on the ice for his teammates. Hughes has the ability to find those open guys with the puck and make those around him better.

“Look at what Quinn Hughes has done for the Vancouver Canucks, then you say, oh, there’s his brother Luke, who’s also in this draft,” Hockey Sense’s Chris Peters told the Sound Of Hockey Podcast. “(Luke) is 6-foot-2, where Quinn is like 5-foot-10. Luke skates very similarly to Quinn. He doesn’t have the straight-ahead speed that Quinn does yet but that could come. (Luke) is not quite as dynamic offensively either, but he is an offensive defenseman, he scores points, and he gets pucks through to the net. He makes plays.”

Hughes is not ranked as high as someone like Owen Power, but there are those who believe he ultimately has the most upside of the class.

He is confident on the ice with the puck and off it.

“I think my three biggest strengths are my hockey sense, my skating, and compete level,” Hughes said about his game. “I can play in all situations. I can play the power play I can play the PK. You know, I can defend the cycle, defend the rush, and net-front. I’m really poised with the puck in my transition game.”

The attributes that Hughes and scouts alike use to define his game can be found on film.

In this clip from play in the USHL, Hughes demonstrates his puck management and poise as he draws two defenders to him up high. His on-ice vision allows him to see the teammate that is left open, and he makes a sure pass that sets up a great look at the net.

In this entertaining shift, he pinches in and gets the entire defense chasing him as he controls the puck, shows off some edge work, and eventually spins a defender right off his skates to free up space for himself.

Controlling the puck to exit the zone is a key skill for a defenseman. Here is an example of Hughes retrieving it in his own end and beating two forecheckers by himself with poise to rush the puck to the opposing blue line.

Hughes also has the ability and sense to join the offensive rush, as he does here to pick up a goal.

Will the Seattle Kraken take Luke Hughes with the second overall pick?

The prevailing thought is that Seattle will pick Matty Beniers or Owen Power at number two, depending on what the Buffalo Sabres do with the first pick.

But that assessment is speculation based on the latest NHL Draft rankings around the internet. They have Hughes pegged as the fourth- or fifth-best option. Of course, none of that matters. If Seattle’s amateur scouting team and Ron Francis feel that Hughes’ potential is the highest of this class, then don’t be shocked if they select him.

Francis drafted defensemen with his first pick three of the four drafts he had while with the Carolina Hurricanes and with the number of quality blueliners in this year’s class, he could do so again by taking Luke Hughes to come away with a cornerstone of the future.

The New Jersey Devils have the fourth overall pick and if Seattle passes would love to team up Luke Hughes with his brother Jack, whom they drafted first overall in 2019.

“My brother, you know, clearly wants me to be there and that’d be super cool to play with him,” Luke Hughes said. “I’d love that but at the same time, it’s 32 great teams out there and I’d be happy to go to any one of those teams.”