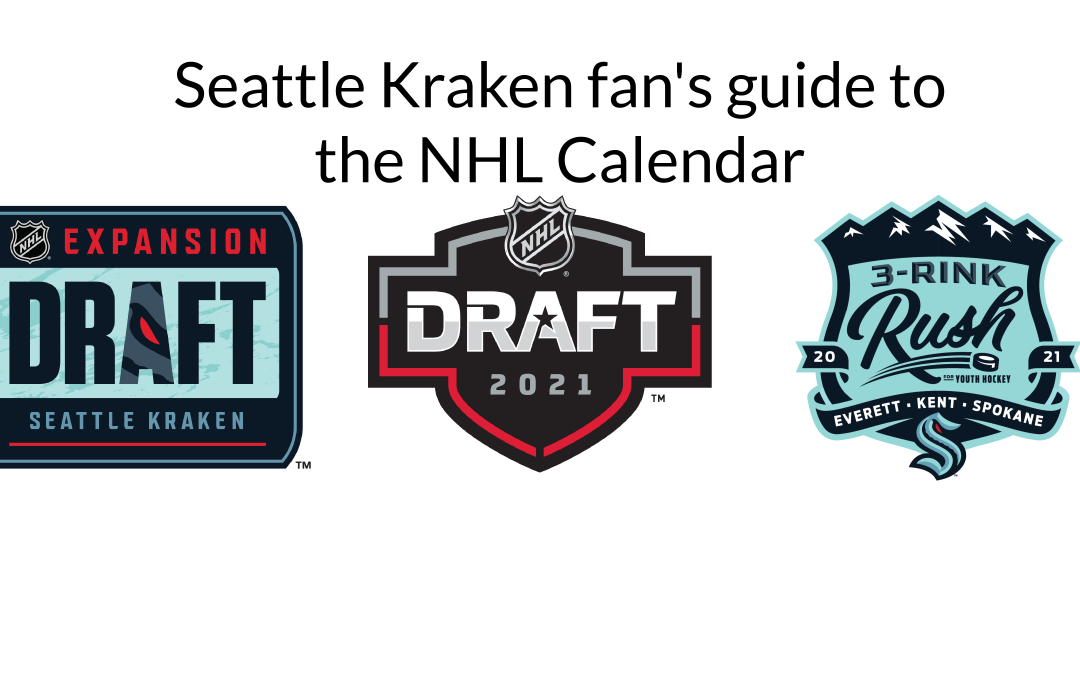 The 2020-21 NHL season might have ended last week, but we are headed into two of the busiest weeks on the league’s calendar. We thought it would be a good idea to lay out the key dates and milestones and call out what to look for from a Seattle Kraken fan’s perspective.

Key Dates and milestones from the NHL calendar

Mid-July – There has not been a release day set for the 2021-22 NHL schedule, but we anticipate it will be announced around this time.

What to look for: Rivalry games and road trips. Let’s go!

What to look for: There are a couple teams that would love to have a player waive his NMC. Calgary has already gotten Milan Lucic to waive his, but other teams to watch are the Colorado Avalanche (Erik Johnson), Buffalo Sabres (Jeff Skinner), Florida Panthers (Keith Yandle), and Minnesota Wild (Zach Parise, Ryan Suter). Expect bits of information to leak out about the status of these players and their NMC’s. Colorado and Minnesota are probably the most intriguing from a Seattle perspective because if they do not get these players to waive, someone very talented should be exposed.

July 17 – Rosters freeze at noon PST and Expansion Draft protection lists are due to the league by 2 p.m.

What to look for: News will leak about who is protected and who is not, but the NHL will not publish the official protection lists until the 18th.

July 18 – Expansion protection lists released. The Seattle Kraken can negotiate with any restricted or unrestricted free agents that are unprotected.

What to look for: All the mock drafts and projected protection lists are out the window at this point. It is important to understand that there will be side deals in the Expansion Draft and the Seattle Kraken might not always select the best player available if there has been a pre-arranged side deal with the respective clubs.

July 21 – Seattle Kraken must submit their list of expansion players to the NHL by 10 a.m. PST and the selections will be announced at 5 p.m. PST on ESPN2 that day.

What to look for: Selections will be leaked throughout the day as players are informed of their selection. The mystery will be in the trades and side deals that will happen as part of the Expansion Draft.

What to look for: Barring any big trades, the Kraken will have at least one pick in the first round, but if the Vegas Expansion Draft was any indicator, they could accumulate a few more first-round picks. Most of the players drafted in the first round will not play in the NHL during the 2021-22 season, but they will be the foundation of the team down the road.

July 26 – The deadline for teams to extend qualifying offers to their restricted free agents.

What to look for: In previous years, this deadline hasn’t been that interesting, but with the salary cap crunch the league is facing right now, teams might be unwilling to extend qualifying offers to players with arbitration rights. If teams extend qualifying offers to players that are eligible for arbitration, players could exercise their rights and potentially force the team to use more cap space on them. Players like Alex Nedeljkovic (Carolina), Andreas Athanasiou (Los Angeles), and Teddy Blueger (Pittsburgh) all fit in this category and could be surprise players to not be extended a qualifying offer. By not receiving a qualifying offer, they will enter unrestricted free agency and could sign with any team.

What to look for: The Vegas Golden Knights were not big players in their first year of NHL free agency. We do not expect Seattle to make a big splash in its first year either, but because of the salary cap situation, Seattle could be a great destination for some value players that might not be able to find the dollars they want elsewhere. We anticipate a few players in the second tier of free agents – perhaps guys like Tyson Barrie or Brandon Montour – to be candidates for signing in Seattle.

Early September – No firm date has been communicated, but the Kraken Community Iceplex is expected to open to the public within the first two weeks of September.

What to look for: Learn to Skate, Learn to Play, Adult Hockey, etc.

Middle of September – Seattle Kraken prospect camp begins. No dates or communications have gone out about this, but Ron Francis hinted at a prospect camp right before training camp to minimize the travel and complications of crossing borders during a condensed offseason.

What to look for: Expect a healthy number of practices that are open to the public. Open practices are an excellent way to connect with the community and with fans that might not have the ability to attend regular-season games.

What to look for: Everything!

It goes without saying that the next three weeks will be the biggest three weeks of the Seattle Kraken’s brief history. Anticipate a wide range of national coverage that will speculate wildly about future success or failures of the franchise. Read with caution. Most post-Expansion Draft articles from the Vegas draft picked the Golden Knights to finish dead last in the league. The Golden Knights then proceeded to play in the Stanley Cup Final. It would be foolish to expect the same type of success in year one for the Kraken, but we will not have a great idea about how this team will look until mid-November. No matter what, this is when the fun begins, enjoy it.