The Expansion Draft rumor mill is churning. What should we believe? 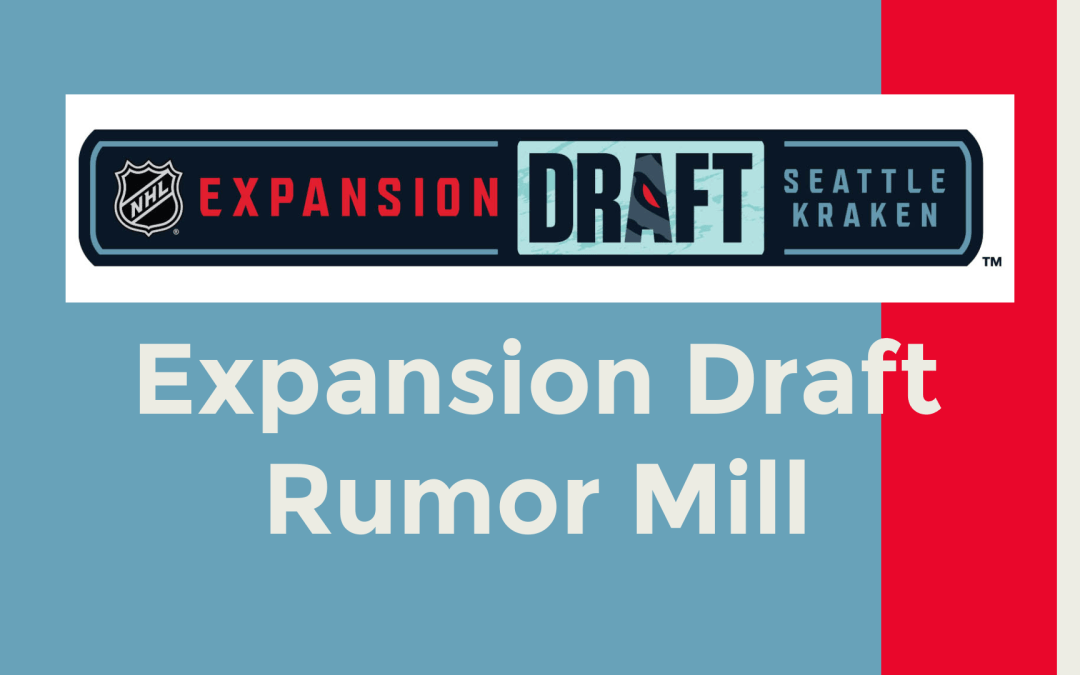 Expansion Draft rumors started circulating before the protection lists were even released. There has since been a flurry of reports, whispers, and rumors on what is happening with Seattle and the Kraken’s plans for the Expansion Draft. Some of these reports will come to fruition and some will flame out. Nothing will be finalized until we hear the official selections on Wednesday evening when the Seattle Kraken announce their picks at Gas Works Park.

Rumor: Chris Driedger will be one of the goalies selected in the Expansion Draft

Assessment: Driedger has been cited as a goalie of interest for months. At the time of this tweet, it seemed odd that Seattle would be close to signing a pending UFA, before the 48-hour free agent negotiating window. There are scenarios where pending UFA’s are given approval to start talking to other teams before free agency officially begins, so this is possible and within the NHL rules.

Since then, Elliotte Friedman published the details of the contract with Driedger, which feels close to locked. Bank it.

Assessment: I do not think Seattle is legitimately considering taking Price unless there are some significant assets coming back or some salary is retained or something like that. The Kraken probably explored some options involving Carey Price, but it just does not feel consistent with their strategy of leveraging their cap space and the heavy investment in analytics. With the imminent signing of Driedger for a $3.5 million cap hit per year, coupled with a potential $10.5 million for taking on Price, this seems like a dead issue.

Rumor: Seattle will select Nikita Zadorov from the Chicago Blackhawks

Assessment: Chicago does not have a lot of good options for Seattle to choose from, and Zadorov does seem like the most popular selection from what they do have. Calvin de Haan is the only other player on the table, and he is four years older than Zadorov. I would not lock Zadorov in until the ink is dry, but this seems like the likely scenario.

Rumor: Mark Giordano will be selected from the Calgary Flames

Assessment: Calgary is another team without a lot of quality options for the Seattle Kraken, and Giordano has been on most people’s lists for a while. He is the current captain of the Calgary Flames and possesses the leadership qualities the Kraken will need in year one. There is also a scenario where he is drafted and flipped, though, so don’t go ordering your Giordano jersey right away.

Rumor: Vladimir Taresenko could be drafted and flipped

Assessment: The key word here is “could.” No one is saying this is going to happen. The “draft and flip” scenario was used four times by Vegas in 2017 and might be more common in 2021 as Ron Francis leverages his salary cap position to launder players, take on salary, and gather draft picks.

Also, it’s important to note that Vince Dunn is a restricted free agent and will still need a contract should the Kraken select him. Francis and his staff could just be weighing all their options at this time before they need to submit their final pick for St. Louis.

Rumor: New York Islanders are mulling over a side deal to prevent the Kraken from selecting Josh Bailey

Assessment: The New York Islanders’ protection list was a bit of a headscratcher when it was released. The Islanders are protecting fourth-liners Cal Clutterbuck and Matt Martin over Josh Bailey and Jordan Eberle. Clutterbuck, 33, and Martin, 32, each had 11 points this season, while 31-year-olds Bailey and Eberle had 35 and 33 points respectively.

The feeling was that the Islanders exposed Bailey and Eberle in hopes that Seattle will take either along with one of their ~$5 million cap hits versus Clutterbuck’s $3.5 million and Martin’s $1.5 million contracts. If there is a deal in place for Bailey, it feels like this would have been pre-arranged before the protection lists were due.

Assessment: Ok, the fish part is not the believable part, but Kerfoot is one of the few options out of Toronto. ESPN probably went through multiple takes with multiple names in hopes of using it in the broadcast. It is no secret that Kerfoot, Jared McCann, and Travis Dermott are the options out of Toronto. So why not record Kevin Weekes and the fish mongers doing this for those three players to then use the correct one in the broadcast? Now that is believable.

We have about 24 hours left in this rumor mill before the Wednesday 7 a.m. deadline for Seattle to submit its expansion selections to the league. This is one of the fun parts of the process, and it certainly is enjoyable to see people’s heads explode online. Still, when these rumors pop up, consider pumping the brakes a bit before you share them as if you are a TSN Insider.