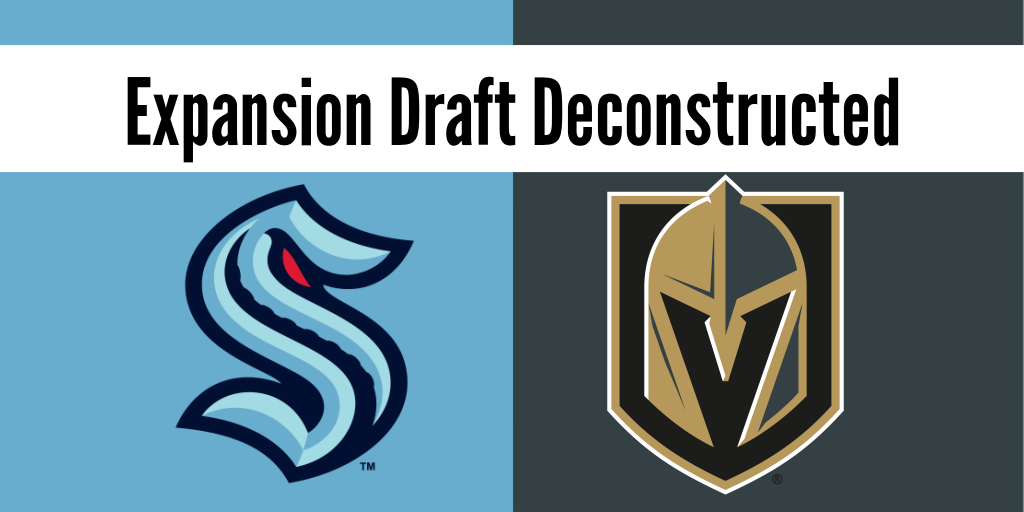 We are roughly two weeks removed from the Seattle Expansion Draft, and the roster has already shifted quite a bit since the players were announced at Gas Works Park on July 21. Five of the players selected are no longer with the team and three high-profile free agents have been added to the squad. One thing that has been interesting over the last two weeks is the stark contrast between how the Vegas Expansion Draft played out and how the Seattle Expansion Draft went. With similar rules but very different circumstances, the two organizations ultimately took very different routes to constructing their inaugural rosters.

By the rules, Seattle and Vegas were each required to select 30 players from the teams participating in the Expansion Draft. At a high level, there were four different scenarios that could have played out for these player assets.

Here is a look at the Vegas Expansion Draft moves

The theme of the Vegas Expansion Draft was side deals. They acquired four additional players this way, plus the negotiation rights of another player that signed a contract nine months later with the team.

The Kraken had zero side deals in the Expansion Draft, but they were able to draft and extend three pending unrestricted free agents during the 48-hour negotiating period prior to the Expansion Draft. The signings of Jamie Oleksiak, Chris Driedger, and Adam Larsson to contracts should be testimonials to how players now view playing for an expansion team.

Shea Theodore, Reilly Smith, and Alex Tuch are all considered the steals of the Vegas Expansion Draft that embarrassed several NHL general managers. This is likely why there were no side deals in the Seattle Expansion Draft as general mangers feared looking bad this time around.

Following the Vegas Expansion Draft, the general consensus was that the Golden Knights would be the worst team in the NHL in their inaugural season. That outlook probably created some reluctance for some of the higher sought-after free agents to sign with the Golden Knights. It shows in their signings when free agency opened that year.

If you do not recognize many of those names, it is probably because very few of them would actually go on to play in the NHL after signing with the Golden Knights.

Conversely, the success of the Golden Knights in their first year of existence probably created some sense of optimism around playing for an expansion draft team. It certainly helped in signing Oleksiak, Driedger, and Larsson during the Expansion Draft, but also came into play during free agency.

Seattle made significant upgrades in free agency while Vegas added minor league depth that never amounted to much at the NHL level.

The one area where Vegas did particularly well was its ability to accumulate draft picks around the Expansion Draft. George McPhee, general manager of the Golden Knights in 2017, accumulated an additional 14 draft picks. These picks were accumulated in side deals and trades.

As mentioned above, Seattle did not have any side deals in the Expansion Draft, which really hampered their ability to accumulate draft picks. To date, Seattle has made three post-Expansion-Draft trades that have added three NHL Entry Draft picks to their quiver.

The unwillingness of NHL general managers to participate in side deals during the Seattle Expansion Draft has certainly put a damper on the Kraken’s ability to stockpile draft picks.

The Kraken are not done yet

We are quickly approaching the quiet part of the NHL calendar when there will be little news and even fewer trades. It might stay quiet on the Seattle front for a bit, but the Kraken are not done making roster moves. They still have some salary cap space at their disposal and a strong defensive core that might provide some value on the trade market. Anticipate things to heat up come September as training camps start to open across the NHL.