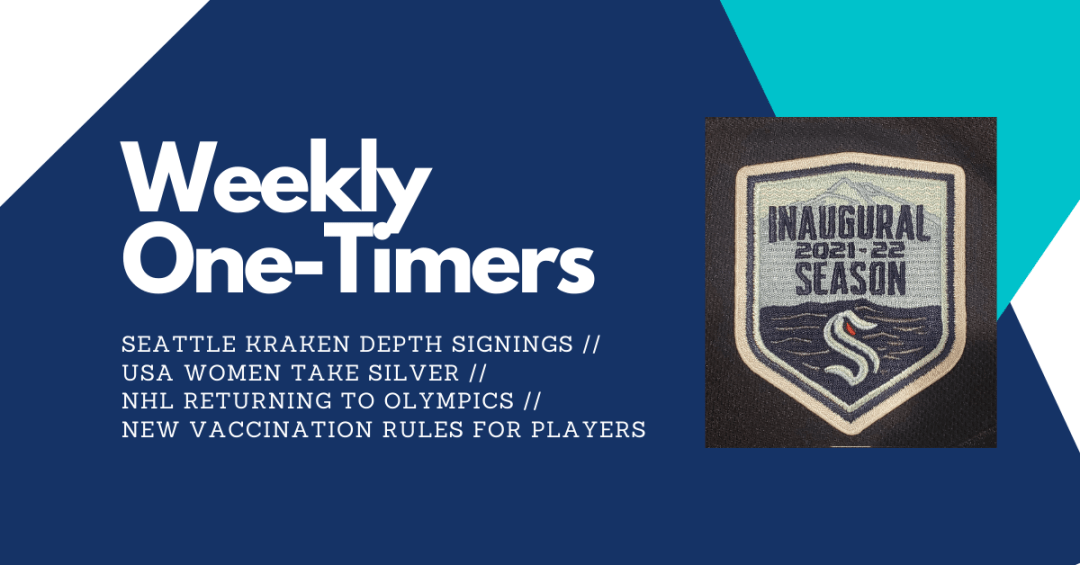 Can you smell that? That funky, yet wonderful aroma? It smells good, doesn’t it? You know what that smell is? That’s the smell of hockey season, folks! Ok, perhaps “good smelling” and “hockey” don’t typically go together all that well, but nonetheless, it’s in the air. Kraken players are making last-minute preparations and will be descending upon the Emerald City in the coming weeks, as the team’s inaugural training camp is just around the corner. In fact, believe it or not, the first preseason games in team history will be played THIS MONTH!

We’re almost there, gang. And while the hockey world has been largely dormant for the past month, there have been a few things happening of late. We fill you in on what you may have missed on this latest edition of Weekly One-Timers.

The Kraken continued adding to their stockpile of veteran depth players on one-year deals this week, signing 29-year-old forward Riley Sheahan to a contract worth $850K. The 6-foot-2, 216 pounder won’t be a top-six guy, but he can provide some center help to the checking line and win faceoffs. He also kills penalties, so there’s some value there. How Sheahan slots in remains to be seen, but we could envision him centering Seattle’s fourth line for much of the season or serving as an extra forward for when injuries happen.

Sheahan has never produced big numbers offensively and is coming off a season in Buffalo in which he notched just four goals in 53 games. So, he isn’t here to fill up the opposing team’s net. Says Ron Francis via press release, “His versatility, strong penalty-killing ability, and skill in the faceoff circle make him a valuable addition to our forward group.”

So, there you go. He’s a depth guy who can play in the middle. Sheahan has 566 career NHL games under his belt with the Red Wings, Penguins, Panthers, Oilers, and Sabres. He has 70 career goals and 107 assists, and he is slightly above 50 percent in the faceoff circle, with his best season at the dot coming in 2018-19 when he won 54.93 percent of his draws.

This one actually happened last week, but we haven’t had a WOT article since then, so we will mention it. The Kraken also brought defenseman Gustav Olofsson, 26, into the fold on yet another one-year deal worth $750K. The Colorado College and Green Bay Gamblers (USHL) alumnus was once a highly regarded prospect in the Minnesota Wild organization. But multiple serious shoulder and knee injuries derailed things for him right when it looked like he was about to break the NHL lineup full time.

In all, Olofsson has 59 career NHL games with 11 assists. He played last season for the Laval Rocket of the AHL, where he notched a goal and 11 assists in 24 games.

Thunderbird netminder Thomas Milic, 18, received an invitation to make the trek up I-5 from Kent for Seattle Kraken training camp, slated to start Sept. 22. Milic was named the WHL U.S. Division’s rookie of the year last season, with 2.74 goals against average and .913 save percentage in nine games. He also allowed just one goal in two games for Team Canada at the U18 World Championship in the spring.

Milic did not get selected in the 2021 NHL Entry Draft, but he still has two years of eligibility. Kraken training camp gives him a chance to elevate his status as an NHL prospect and helps Seattle by having a warm body to fill a goal crease.

A few fans who signed up for a WaFd Bank account in conjunction with their season ticket plans have already received their personalized Kraken jerseys.

What we learned from the early release is that the Kraken will wear a neat little inaugural season patch, which features some sea, some sky, and some Mount Rainier. As far as patches go, it’s pretty cool!

Jerseys go on sale for the general public starting on Sept. 15.

After having the event canceled and/or postponed two separate times, it was great to see the IIHF Women’s World Championship finally get played out. The tournament did not disappoint, as heated rivals Team USA and Team Canada advanced to the the gold medal game and went to three-on-three overtime.

Things were looking good for the Americans in the early going of the pivotal contest, as they jumped out to a 2-0 lead thanks to two greasy netmouth rebound goals by Alex Carpenter. But the pesky Canadians clawed their way back to level the score midway through the second period. Ann-Renée Desbiens made some great saves down the stretch to carry her squad into the extra frame, where the legendary Marie-Philip Poulin sniped home a game winner that only she knew had gone in.

By the way, we at Sound Of Hockey are big fans of 20-minute three-on-three sessions. Holy cats!

Canadian Blayre Turnbull reportedly broke her fibula while celebrating the gold medal win, but then stayed on the ice on a stretcher to celebrate. #HockeyPerson

NHL to participate in the Olympics

The NHL will participate in the Olympics after all! We weren’t particularly surprised to hear this, being that Seattle will play just three games in the entire month of February after the league built a long break into the schedule. But after the league skipped the last Games, we were still hesitant to make assumptions. This is great news for hockey fans all around the world. Nations will submit their “long lists” in mid-October, and final rosters will be announced in January.

Philipp Grubauer (Germany) and Alexander True (Denmark) are the most likely Seattle Kraken players to represent their respective countries at these Olympics.

The University of Alaska Anchorage hockey program has been saved! After a wild ride and an incredible fundraising campaign, Save Seawolf Hockey reached its $3 million goal, and UAA announced that it would reinstate the program for the 2022-23 season. Read all about the remarkable efforts of campaign chairperson Kathie Bethard here.

The Cincinnati Cyclones of the ECHL hired Jason Payne this week as their head coach. Payne becomes the only Black head coach in North American professional hockey. The Cyclones are also the only pro hockey team with a female general manager, and they are the same organization from which the Kraken hired Everett Fitzhugh to be the NHL’s first Black play-by-play voice. Payne, 45, was previously the team’s assistant coach and played a 14-year pro career.

After effectively being booted out of Gila River Arena by the City of Glendale, the Arizona Coyotes have been seeking a long-term arena solution in the Phoenix area. This week, the organization submitted a bid to build a new arena in Tempe, a very positive first step in the process. Under their current agreement with Glendale, the Coyotes can only play one more season at Gila River Arena. So if this bid—which will likely require several months of review—gets approved by Tempe, the team will still be without a home starting in 2022-23 and will need to find a temporary venue.

NHL not messing around with anti-vaxxers

The NHL rolled out its COVID protocols for players and staff this week. The league and the NHLPA agreed on the rules, which do not mess around with those who are choosing to not get vaccinated. There will be monetary loss for unvaccinated players who miss time due to infection or close contact with positive cases, and the experiences between vaccinated and unvaccinated players will be very different. Elliotte Friedman had a good rundown of the protocols here. Michael Russo also reports that approximately 95% of NHL players are fully vaccinated.