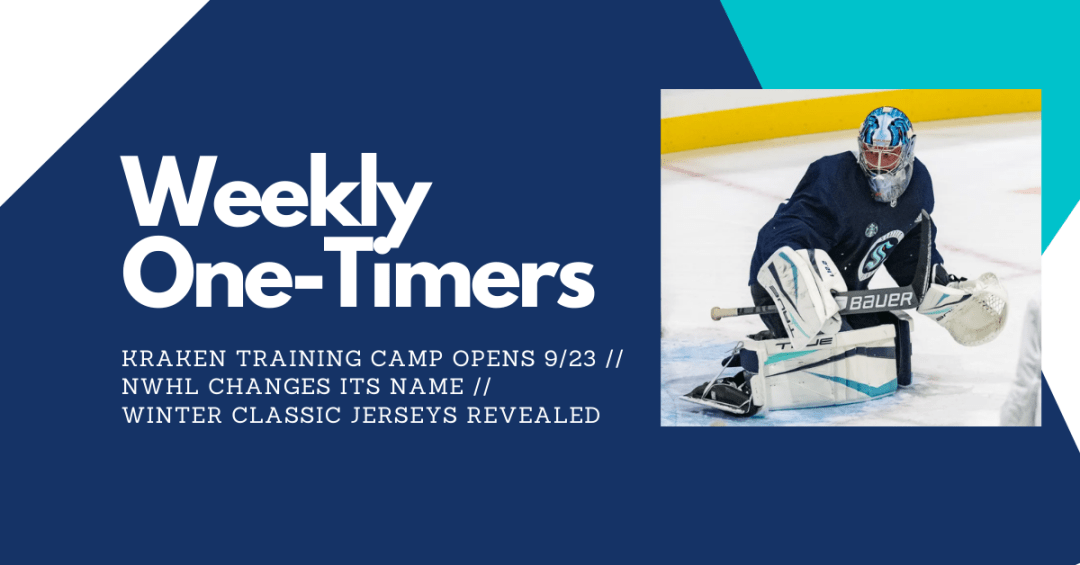 Things are getting very real, Kraken fans! The Kraken Community Iceplex is open, players have arrived and actually skated in front of media on Thursday, and Kraken training camp is officially set to open on Sept. 23. Oh yes, things are definitely getting real.

Here’s what you need to know from the hockey world for this past week.

The Kraken Community Iceplex had its grand opening on Thursday. As part of the event, a group of Kraken players including Jaden Schwartz, Philipp Grubauer, Alexander Wennberg, Calle Jarnkrok, and many more took the ice for an informal practice and played a scrimmage. Check out Andy Eide’s story on the event here, which features lots of great photos of the event from Brian Liesse.

We know you’re wondering, and yes, we did get a good look at Philipp Grubauer’s Kraken goalie gear.

He has gone with a mostly white True setup, with deep sea blue and ice blue accents, while his mask is heavily branded with team logos. It’s a pretty typical setup for Grubauer and isn’t anything groundbreaking, but it’s clean and tastefully done, and it’s certainly cool to see the team’s star netminder already donning his Kraken-specific equipment.

Have you heard the news? Training camp is set to open Sept. 23! By my math, that’s just 12 days from now. Fans will be able to procure tickets for the event if they are members of The Depths, the online club that was recently introduced by the team to give access to pre-sales, exclusive content, and several other benefits.

Fans ages 12 and older will be required to show proof of vaccination against COVID in order to attend training camp, which will be held at the Iceplex.

Speaking of proof of vaccination, you will need to be fully vaxxed if you want to attend games or concerts at Climate Pledge Arena.

This is a pretty big deal. Other pro sports teams wanting to show that they are taking seriously the fight against the ongoing pandemic have required either proof of vaccination or a negative test. But the Kraken—always progressive in their approach to social issues—will give only one option to fans wishing to attend, and that is to get the shot.

The team will also require proof of vaccination for its three preseason games in Spokane, Everett, and Kent.

A year ago, going to an arena of 17,000-plus screaming fans would have been a non-starter for most. But now, there will be a way to attend with relative peace of mind that everyone in the building has taken the necessary steps to stop the spread of this still scary and still very dangerous disease.

The last of the restricted free agent dominos fell for Seattle this week, as defenseman Dennis Cholowski was signed to a one-year, two-way deal worth $900K. The 23-year-old was selected by the Kraken in the Expansion Draft from the Detroit Red Wings.

Cholowski was born in Langley, B.C., and spent a year in the WHL, splitting the season between Prince George and Portland. He had a strong rookie season in Detroit in 2018-19, when he played 52 games and notched 16 points. Since then, he’s been up and down between the NHL and the AHL, and last season only got 16 games with the big club.

He’s a two-way defenseman with upside, but he also will be competing in Kraken training camp for a spot on a deep blue line and is on a two-way deal, meaning there’s a good chance he spends time in Charlotte this year.

The National Women’s Hockey League is officially changing its name to become the Premier Hockey Federation before the upcoming season. Per the league’s official announcement, the move is meant to eliminate gender inequities by lifting the word “women’s” from the name, while also providing a more inclusive environment for all of its athletes.

Ditching six years of work to build up the NWHL into a recognizable brand had to have been an enormous decision for the league and relatively new commissioner Tyler Tumminia. And while we certainly don’t doubt that inclusivity is at the heart of it, we can’t help wondering how the decision was impacted by the existence of the Professional Women’s Hockey Players Association.

The PWHPA’s membership features some of the world’s best players, many of whom have been vocal against the NWHL in the past. Could the change to PHF have anything to do with trying to win back some of those players? Time will tell.

As a native of Minnesota, I can tell you that Wild fans gave a big, collective “uffda” at the revelation of these busy, excessively striped, elbow patched uniforms (yes, they have elbow patches).

St. Louis, meanwhile, played it a little safer and came up with a pretty clean, simple look that should play well on TV.

Speaking of St. Louis, David Backes got the one-day contract treatment from the organization that drafted him and employed him for 10 NHL seasons. So, he officially retires as a member of the Blues, after spending time in Boston and Anaheim the last couple years. Backes, 37, scored 248 goals and 313 assists in 965 career regular-season games. He was given quite the sendoff when he made his last visit to St. Louis as a Duck last season, so his decision to officially hang up the skates was not a surprise.