Dissecting the Seattle Kraken schedule by the numbers 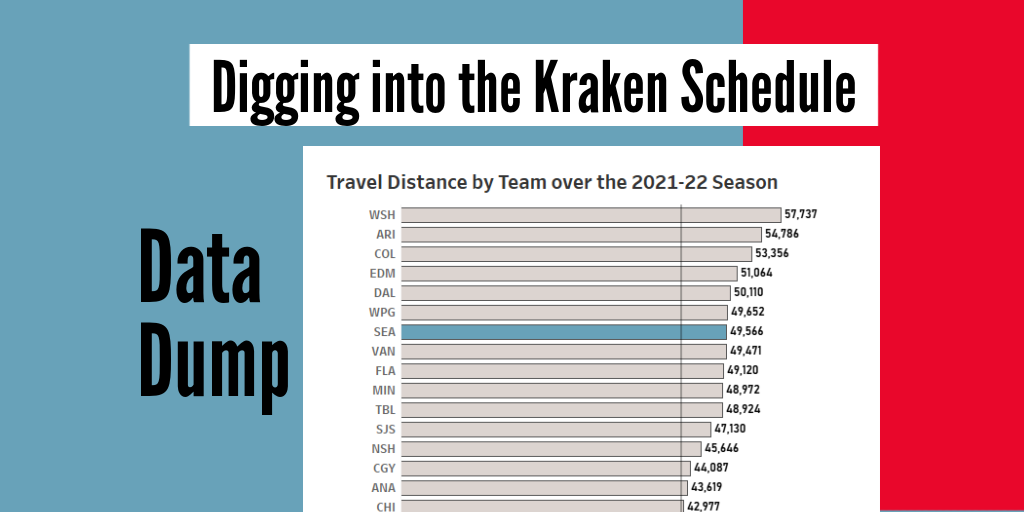 With the NHL season less than a month away, we thought we should revisit the Seattle Kraken schedule to see how it stacks up with the rest of the league across a few different metrics. Specifically, we are going to look at total travel distance over the season, the number of road trips, and the number of back-to-back games the Kraken will face this year compared to their NHL counterparts.

Being that Seattle is in the corner of the United States, there is room for concern that the Kraken will be traveling quite a bit in a typical NHL Season.

The Seattle Kraken will travel the eighth-most miles in the NHL this season with 49,566.

Another way to look at this is to consider how the Seattle Kraken travel compares to that of their divisional rivals and how the other divisions stack up against one another.

It is interesting to see the Pacific Division has the tightest cluster of travel distances by team. This bodes well for the Kraken, as they will be on a relatively level playing field with their closest rivals in this respect.

Also, this is unrelated, but it is interesting to see Washington as such an outlier in the Metropolitan Division.

Distance is one aspect of the travel schedule, but we should also look at the quantity of road trips a team might have on the schedule.

In the number of road trips category, Seattle has the second-fewest trips behind only the Vancouver Canucks. This should be a good thing for Seattle Kraken players, although it will mean a few long stretches away from home, including to start the season.

Finally, we need to consider back-to-back games, as this ends up being a factor for every NHL team.

Playing on consecutive nights can be tough on teams in general, but the biggest impact is on goaltending. It is quite rare for the same goalie to play both games of a back-to-back scenario, so it is important for a team to have a strong goalie tandem should they have a lot of back-to-back games.

In Seattle’s case, they have 15 back-to-back game scenarios. It is a good thing the Kraken have one of the best goalie tandems in the league in Philipp Grubauer and Chris Driedger. Additionally the third goalie, Joey Daccord, has proven he can play in the NHL should there be a an injury to Grubauer or Driedger.

Because I had access to the data, I thought I would share this distribution of road trips and home games throughout the season.

Down the stretch, the road trips and homestands are shorter than those of the first half of the season. This should have a positive impact on the team’s performance on the ice as they hopefully make a push for the playoffs.

Success in the regular season has a lot of variables and constraints beyond the challenges of the schedule, but we will continue to monitor the team performance based on some of these scenarios.

Hope you enjoyed this different perspective of the 2021-22 Seattle Kraken schedule.