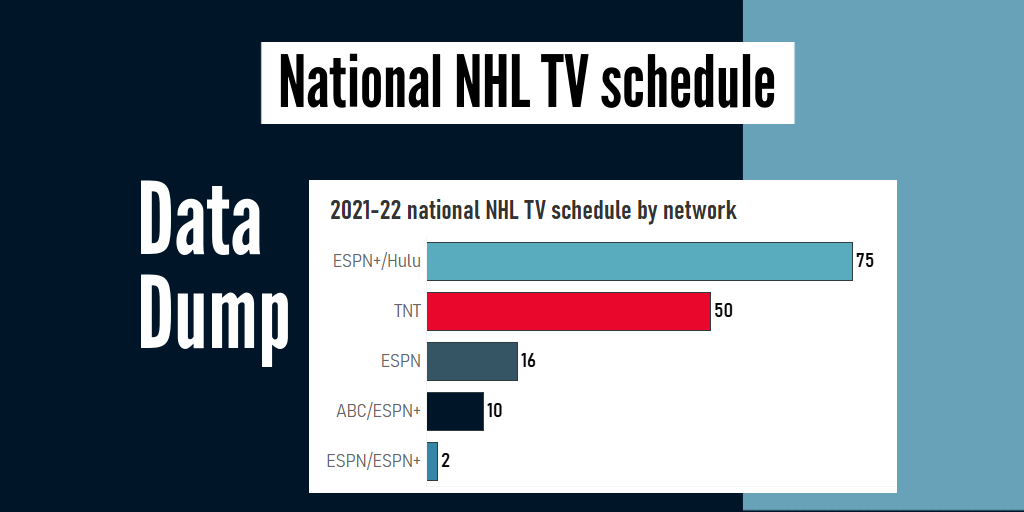 Earlier this week, the Walt Disney Company and Turner Sports announced their US NHL TV schedules for the upcoming season. Disney will air 103 NHL games across their platforms of ESPN, ESPN+, Hulu, and ABC, while Turner will air 50 games on TNT. In this week’s data dump, we dig into some of the numbers in the schedule.

This will be the first year the NHL will have two TV partners with Disney and Turner sharing the duties, which has created the opportunity to have more games televised nationally.

The most interesting component of the national TV schedule is the ESPN+/Hulu piece of the Disney contract. For those that don’t know, ESPN+ is a standalone streaming service that does not require a typical MVPD subscription.

ESPN+/Hulu will air 75 games, the most of all the channels airing national games this season. Turner will carry the most games in the traditional TV space (i.e., cable, satellite, and IPTV).

Here is a look at how games are spread throughout the season.

The schedule is predictably light in the first several months because of all the football programming that tends to suck up sports media airtime in the fall. The large drop in February is due to the Olympic break in the NHL schedule.

For those of you that like to build routines in your schedule and might want to dedicate a certain night of the week for watching the nationally televised game, here is how the games are distributed by day of the week.

Looking at it by day of the week is where you can really see the impact football has on the schedule, as there are no Thursday or Sunday NHL games aired until January. Tuesdays and Wednesdays are clearly the most common and consistent night for nationally televised games, and it will be fun to see if Disney and Turner do any unique shoulder programing or intermission shows on those nights.

Here is a look at how many nationally televised games each team will get this coming season.

What is refreshing to see is Carolina and Florida have eight games each. Both clubs are fun and exciting to watch but traditionally get de-prioritized as small market teams. In 2019-20, the Hurricanes and Panthers had just one game each on the NBC/NBCSN schedule, so it is exciting to see that Disney/Turner are giving these teams the national stage they deserve.

As noted above, the Seattle Kraken will have 13 nationally televised games this upcoming season. Here is a list of those games.

The ESPN+/Hulu games will be a different experience for hockey fans, since they will require an app/login if you are new to that platform. ESPN+ will also get you the out-of-market NHL games that will replace the NHL.tv package.

It should be an exciting time for NHL fans as the partnerships with Turner and Disney could push the game into new levels of exposure and coverage. If you have any questions or thoughts about the TV packages, drop a note in the comments.