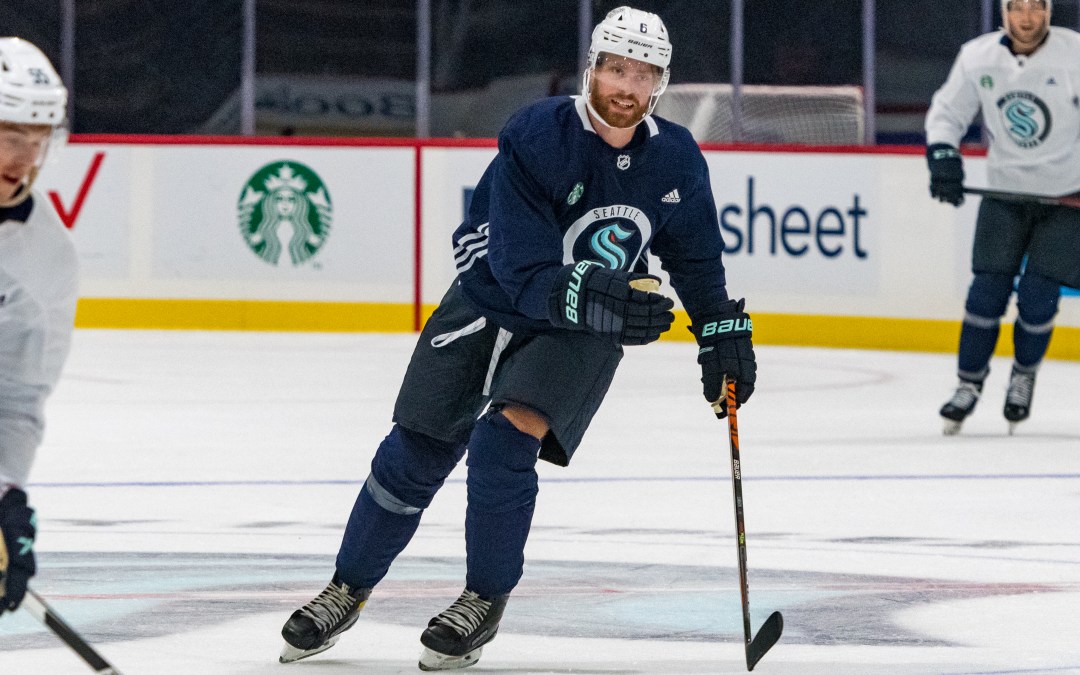 It’s roughly a nine-hour flight, spanning over 4,400 miles, from Skelleftea, Sweden, to Seattle. That’s the distance Seattle Kraken defenseman Adam Larsson traveled to join his new team at the Kraken Community Iceplex to prepare for the upcoming season.

Larsson, 28, figures to be a key player on the Kraken blue line but first needs to acclimate to the time zone, something he says he is just now getting used to.

“It’s been a couple of nice days here,” he said last week after an informal skate. “I’m still trying to figure out the city a little bit and everything around.”

A right-shot defenseman who routinely logs 20-plus minutes a game, Larsson is a veteran of 603 NHL contests with the New Jersey Devils and the Edmonton Oilers. It’s that experience and leadership that will be counted on as Seattle tries to meld together a group of players both young and old.

After being selected by New Jersey with the fourth overall pick during the 2011 NHL Entry Draft, Larsson would be traded in the 2016 offseason to the Edmonton Oilers for former first overall pick Taylor Hall. That trade garnered a lot of attention and forced Larsson to adapt to a new team.

Larsson signed with Seattle as a free agent during the NHL Expansion Draft and is adapting to a new organization once again. Only this time, the entire roster has to adapt to each other quickly.

“It’s different, maybe the outside of hockey part is a lot different,” he said of the transition to Seattle. “Nobody really knows where to live or where to look and stuff like that, but most of these guys are regulars in the NHL. They know what a training camp is like and know what the NHL is like. We’ll figure it out pretty quick, but obviously it’s teammates who have never played together before so it’s gonna be an interesting training camp. We all got 25 new friends now. So, yeah, it’s fun.”

He spent five seasons in Edmonton and the decision to leave wasn’t easy. The Kraken were afforded the ability to talk and negotiate a contract during their exclusive 72-hour free agency window prior to the Expansion Draft. Larsson would eventually sign a four-year contract at $4 million a season with Seattle.

“It was obviously looking and seeing what they built here and being part of something new is always fun,” he said of his decision. “It’s always exciting and I think the right people are running it. I was jumping on this opportunity right away when I knew they wanted me here.”

Larsson has been on the ice with the Kraken since he arrived in town. The team has gathered at the Iceplex for informal skates, referred to as ‘Captains’ Skates,’ to begin the preparation for the season.

These types of skates, which are free of coaches per NHL rules, are not unique to the Kraken. They occur throughout the league, but in Seattle, they’re more critical as the 25 new friends get used to each other on and off the ice.

“I think it’s more important to get to know each other and kind of build a team environment and the friendships that we need to be successful. We’ve had some good practices,” Larsson said.

Larsson is not going to fill up the stat sheet with a ton of goals and assists.

He’s never topped the four-goal mark in any season and his career high in points is 24, recorded with the Devils during the 2014-15 campaign. But goals and points are not where Larsson’s value lies.

Playing at both ends of the ice, he is the quintessential two-way defenseman. He can retrieve the puck, is a good passer, and plays a physical game while not being afraid to initiate contact with the opponents. He hasn’t played a ton of minutes on the power play but will see the ice for crucial penalty kills.

Edmonton valued his defensive play last year and of his 418 on-ice starts 147 were in the defensive zone and 204 were in the neutral zone compared to just 67 in the offensive zone. Most importantly for the Kraken is that he’ll eat up minutes for head coach Dave Hakstol no matter where he starts on the ice.

Larsson is quick to point out that it is too early to say where he’ll play in the lineup or who his defensive partner will be. It’s safe to say that he’ll be in one of the top two defensive pairings for the Kraken, and there has been a lot of speculation suggesting he’ll play with fellow veteran Mark Giordano on the top group.

The two have never played together but are quite familiar with each other, having squared off in the Battle of Alberta over the past five seasons. There is no love lost between Calgary and Edmonton but there is respect.

“I felt like I played him 400 times last year, so I know him pretty well,” Larsson said of his rival turned teammate. “I think it’s everything (that makes him good). The way he plays with the puck, without the puck and he leads the team the right way. That’s why he was the captain of the Flames so long. He’s a very important piece on this team as well.”

Giordano is the more offensively minded of the duo which suggests an intriguing pairing. While Larsson is more of a two-way player, he’s not going to weigh down Giordano but rather compliment him. Where the two play will be one of the items to watch as training camp and the preseason kick off this week.

Training camp will move quickly. The Kraken open camp Thursday, just a handful of days before their first preseason game Sunday against Vancouver. Don’t be shocked if the veteran Larsson gets plenty of ice time.

“I like the preseason,” he said. “It’s the way to get the timing, the touches, the battles and everything. Even with these Captains’ Skates, you’re still battling against your own teammates, so it’s not the same.”

Will Larsson represent the Kraken and Sweden at the 2022 Winter Olympics?

The NHL is returning to the Olympics this winter and Larsson is one of several Kraken players who we might get to see on the international stage.

He’s never played in the Olympics but has represented Sweden before in prestigious tournaments such as three appearances at the World Junior Championship – 2009, 2010, 2011 – and at the IIHF World Championship in 2016, 2018 and 2019.

Will he be hearing the Olympic march this February?

“I think every hockey player would love to play in the Olympics,” he said. “It’s obviously pretty far away right now. I think everybody is focusing on training camp coming up and the NHL season to start, but I think you will see the league kind of ramp up closer to Olympics.”

Sweden boasts some high-end defensemen when it comes to an Olympic team. Most of those players, like Tampa Bay Lightning stalwart Victor Hedman, are elite offensive blueliners but there is room for a solid, two-way defenseman such as Larsson.

“We’ll see if I even fit in there,” Larsson added with a chuckle.

The Olympics are a nice carrot down the road, but for now, Larsson and his Kraken teammates are going to continue to get skates in this week. Then it’s training camp, preseason, and the inaugural voyage of a Seattle hockey team that has been a long time in the making.

“I think everybody will be super excited,” Larsson added. “All the fans, players to coaches, the whole organization and the city. It’s gonna be a lot of fun.”