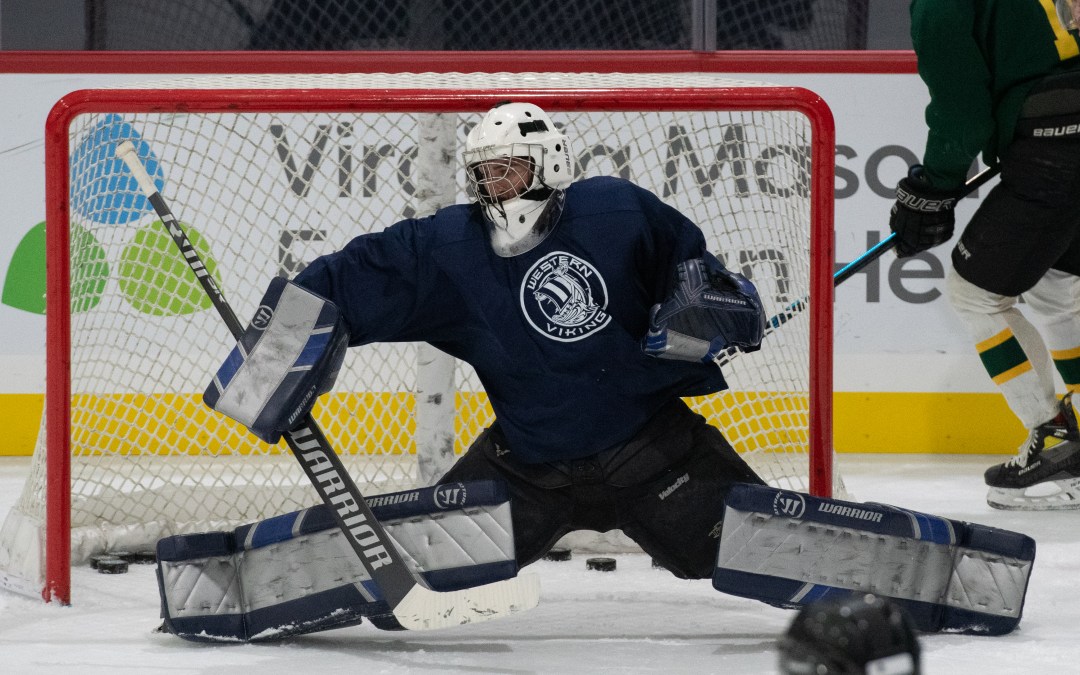 SEATTLE – Monday night the ice at the Kraken Community Iceplex’s Starbucks Rink was filled with local beer league and amateur adult skaters. Nine of them were goalies. This wasn’t a rec league game or a practice but rather an evaluation skate held by the Seattle Kraken as they searched for a few goalies to serve as the team’s emergency backups during the season.

It was a chance for these nine netminders to live out childhood dreams of the big leagues.

The emergency back-up goalie (EBUG) is a unique feature to NHL hockey. No other sport sets up a situation where a guy off the street can step into a regular season game. If all your quarterbacks get hurt in the same NFL game you can’t call to the press box for a former high school star to step in.

In the NHL, you can do that exact thing if both your goalies go down during the same game.

Mandrycky organized the event by reaching out to the local hockey community last week to identify some goalies that might fit the bill. Emails went out Friday for a Monday try out.

It was a quick turnaround but didn’t assuage the excitement of the invitees.

“It was a totally surreal email that came out of the blue,” EBUG hopeful Tyler Zetting, 32, said. “I’m finishing up work, checking my email and I see that email come through and it’s just, you know, it’s like you blackout. And then you come back and it’s honestly almost tears.”

Why do the Kraken need an EBUG?

The NHL requires its clubs to have an emergency back-up in attendance at every home game just in case either team loses both of its goalies to injury or illness.

While the likelihood of an EBUG having to suit up and get into the game is extremely low, the EBUG has an interesting history in the NHL. On several occasions there have been games with one goalie injury which forces the emergency backup to get dressed and sit on the bench.

Getting a great view of the game is one thing, but actually playing is another.

In 2018 the Chicago Blackhawks saw starter Anton Forsberg get hurt during warmups. His backup, Collin Delia, would then get injured in the third period leaving the team with no healthy goalies. In stepped 36-year-old accountant Scott Foster. The EBUG played 14 minutes that night and made seven saves without allowing a goal to the Winnipeg Jets.

Foster would be outdone in 2020 when 42-year-old Zamboni driver David Ayres served as the EBUG in Toronto as the Maple Leafs hosted the Carolina Hurricanes. The Hurricanes built a 3-1 lead but suffered injuries to both James Reimer and Petr Mrazek. Ayres entered the game midway through the second period, and while he gave up goals on the first two shots he faced, he made the next eight saves and became the oldest goalie to record a win in his NHL debut.

Ayres became an instant celebrity after the win and a hero to beer league goalies everywhere.

“That was great,” 41-year-old goalie Tom Marcella said Monday. “I have a Google alert for EBUG so I get it every time they just get someone to dress up and sit in the locker room. The times they get on the ice, it’s pretty hysterical.”

Ayres enjoyed his 15 minutes of fame but some in the league didn’t like the optics. The league would discuss the EBUG policy during league meetings but ultimately decided it was such a rare occasion that the rule didn’t warrant any changes.

How the Kraken evaluated their EBUG invitees

Marcella and his fellow goalies were not alone on the ice Monday. Kraken goalie coach Andrew Allen was skating and evaluating the talent pool. The team also invited a group of 20 skaters, made up of men and women who play locally to take shots on the prospective goalies.

The NHL does not allow professional or former professionals to serve as an EBUG, so the nine goalies on the ice were guys whose ‘careers’ ended prior to making it to the pro ranks, and they came in all shapes and sizes.

“If you were an ex-NHL goalie living in Seattle, you could not be our main backup emergency at the game,” Mandrycky added. “A lot of these guys have some junior experience. These goalies are never going to be NHL goalies or at the AHL level or the ECHL level. If they were, they would be in a different profession right now. Ultimately, we’re just looking for someone who is willing and will have a good attitude about stepping in.”

The evaluation started with Allen putting the nine hopefuls through some agility drills to see how mobile and quick they are. Some were more mobile and quick than others. That was followed by the skaters firing shots at them from about ten feet away, one at a time.

To finish off the night the group played an informal three-on-three cross-ice game. The action was non-stop with goalies and skaters changing on the fly. There was little to no defense played allowing for plenty of top-notch scoring chances.

“You got the adrenaline to push you through,” Zetting, who’s hockey career reached as far as Junior A in the BCHL with the Burnaby Express, said. “But yeah, you’re just trying to control what you can control. Don’t worry about who’s looking, you know, don’t worry about the other guys, you just play your game. Honestly, it’s all about just soaking in the experience, and just enjoying the moment, because how often do you get to be out here for this?”

What’s next for the Kraken EBUGs?

Mandrycky and Allen will compare notes and see if there was anyone worthy at the skate. They will have a rotation of EBUGs ready to go by the home opener on Oct. 23. Mandrycky added that there were probably good local goalies who weren’t there and they may hold future evaluations to find them.

Once selected, one EBUG will attend Kraken home games and sit in The Climate Pledge Arena press box waiting and wondering if their time will come.

And if their time does come, and they watch two goalies go down?

“Just enjoy the moment and just realize you’re in a once-in-a-million opportunity,” Zetting said. “It’s just so crazy to me. There’s no other professional sports thing where an average Joe can come off the street and jump into a professional game. It’s just wild and I love it.”

The goalies were on the ice Monday for the love of hockey and to take advantage of a fun opportunity. One chance to maybe, just maybe, live out those long-lost childhood dreams of playing, or suiting up, for an NHL game.

There’s no pay in it for the eventual roster of EBUGs but that doesn’t matter.

“They’re amateurs,” Mandrycky reminded. “I think they get the game worn jersey and some good memories.”