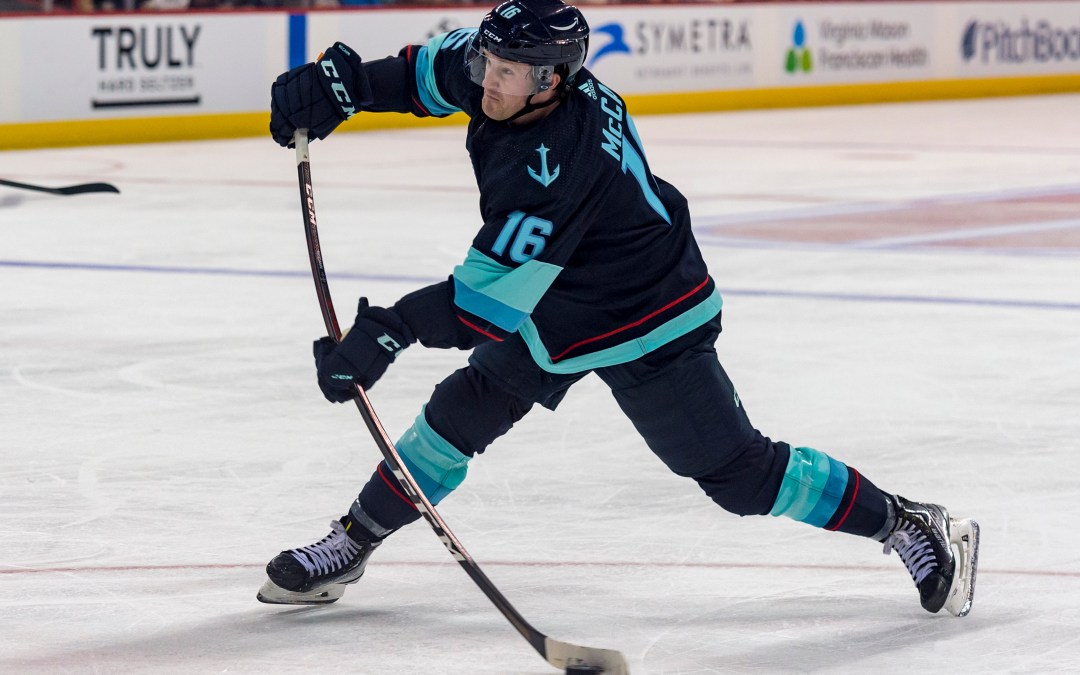 Hello from downtown Spokane, where the Kraken defeated a bunch of guys in Canucks sweaters (there’s a reason I’m not simply calling them “the Canucks”) 5-3 in Seattle’s first-ever preseason game at Spokane Veterans Memorial Arena. Although the outcome was moot, it was a night that will live on in the hearts and minds of Kraken fans everywhere, especially for those in the sellout crowd of 10,208.

I’ll speak from personal experience here. I did not expect to get choked up as the puck dropped and fans started chanting, “Let’s go, Kraken!” But get choked up I did. There were a lot of emotions that came rushing in at that very moment, as the gravity of it all suddenly hit home.

The Expansion Draft was neat. Training camp has been great. But this was different. This was real hockey being played by Seattle’s shiny new NHL team, and thankfully, the rest of the night did not disappoint.

Though it’s right to feel optimistic after the victory, expectations should be managed a bit. The Kraken looked like a much better team on Sunday, but the caveat is that they also dressed the majority of what will certainly be their regular lineup when the season gets underway. Vancouver, on the other hand, trotted out quite a few young players and prospects, including two goalies who are unlikely to crack an NHL roster any time soon.

Here are our takeaways from Seattle’s preseason-opening win Sunday night in Spokane.

At the onset of training camp, I delved into which Kraken players I thought should be carefully monitored by fans. I had Ryan Donato and Riley Sheahan as probables for making the roster but perhaps challenging one another for playing time. Meanwhile, I surmised Morgan Geekie would really have to prove himself in camp just to make the big club on opening night.

Lo and behold, all three found themselves on the scoresheet Sunday, with Geekie notching two goals (his first was a strange and lucky gift, courtesy of Vancouver), and Sheahan and Donato getting one apiece.

But it wasn’t just about the goals. Those guys were involved offensively seemingly all night. Geekie easily could have had a couple more, as could Donato. It’s still very early, but if training camp were to end this week, it would be nearly impossible to leave any of those three in the press box or off the initial roster. If things continue this way, head coach Dave Hakstol is going to have some extremely tough decisions on his hands over the next couple weeks.

Takeaway #2: Jared McCann could be a stud

At the Expansion Draft in July, Brandon Tanev — who had previously played with McCann in Pittsburgh — confidently stated that not only was Seattle getting a great guy, it was getting a great player as well.

McCann was slotted on the top line with Jordan Eberle and Jaden Schwartz and came out with guns ablaze on Sunday, driving offensive zone time and creating scoring chance after scoring chance.

In the first period, he hit the post on Seattle’s first power play and later had two consecutive open looks from right on the doorstep but was robbed twice by Latvian man of mystery Arturs Silevs.

In the second, McCann rifled a shot from the left halfwall that caught Silevs up high and caused the Canucks netminder to delay the game while he recovered. Seconds later, with Seattle on the power play, McCann took a similar shot from the left face-off dot that found it’s way just under the bar and leveled the score at 2-2.

After the game, McCann said he recognizes general manager Ron Francis is giving the players a great opportunity here, and he plans to “take full advantage of it.” Sunday was a great start toward proving that to the Kraken brass.

By the way, since I mentioned Brandon Tanev in this takeaway, we do need to point out that he did one of the funniest things in the history of post-game media scrums on Sunday:

Takeaway #3: Hints at what Kraken Game Ops department has up its sleeve

Though this game was played in a Western Hockey League building — the Spokane Chiefs’ home building, there was definitely an NHL feel to the overall presentation. The videos played throughout were funny, thoughtful, and well produced. My own personal favorite piece of content was when the voice of Freddie Mercury rang through Spokane Veterans Memorial Arena, getting the crowd to sing back with several variations of “Day-o!”

Though the voice heard was that of the legendary Queen frontman performing at Live Aid from Wembley in 1985, the image on the video board was that of an animated blowfish. It reminded us once again that we are in the world of the Kraken, which exists solely at the bottom of the sea. There, the inhabitants are fish that sound exactly like Freddie Mercury.

We also saw the likes of SpongeBob and Charlie from Charlie and the Chocolate Factory requesting additional noise from the fans, and we heard several options for goal songs during the course of the night. I also loved hearing a little riff from Sir Mix-A-Lot’s “Posse on Broadway,” which played under and just after the announcement of the first goal.

Without the bells and whistles of the state-of-the-art Climate Pledge Arena, the Kraken put on a really good show in Spokane. I, for one, cannot wait to see how the finished product will look.