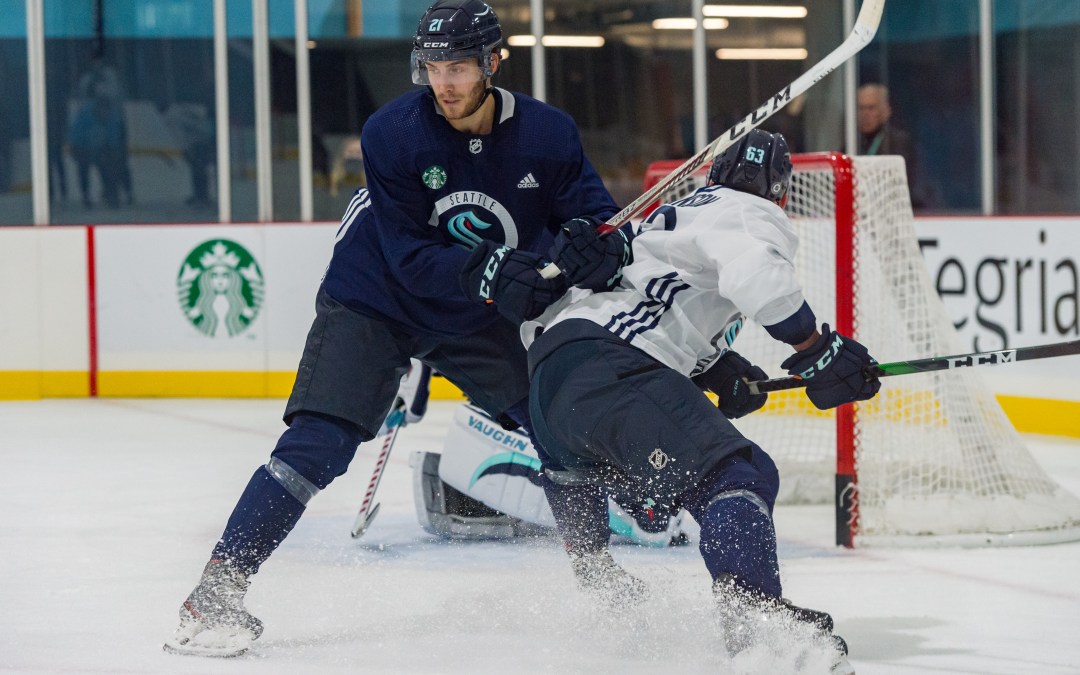 SEATTLE – In preparation for a pair of preseason games this weekend, the Seattle Kraken hit the ice at the Kraken Community Iceplex Thursday for a practice session.

The team was split into two groups which offered insight on who the club views as being in the mix to start the season with the NHL group. Before the workout, a small group of about seven players worked out separately. That group included young players like Luke Henman, Cale Fleury, and Kole Lind.

While the groupings were notable, head coach Dave Hakstol hinted those things are far from settled.

“That was more a matter of function today,” he said after practice. “We want to do some different things in our practice, and going forward for the next two games, players from both groups will play.”

The lines on Friday looked familiar.

Jared McCann again centered what would be considered the team’s top line with Jaden Schwartz and Jordan Eberle on the wings. Behind that group was Morgan Geekie centering a line with Joonas Donskoi and Ryan Donato. Alex Wennberg was back at practice after he had personal time off for the birth of his son. He was flanked by Marcus Johansson and Calle Jarnkrok. Riley Sheahan was centered between Brandon Tanev and Mason Appleton.

A so-called fifth line was also on the ice led by Yanni Gourde – still wearing his red, no-contact jersey – with Alex True and Carsen Twarynski on the wings.

Seattle will play the Edmonton Oilers Friday night at Everett’s Angel of the Winds Arena before moving to Kent and the accesso ShoWare Center Saturday for a matchup with the Calgary Flames.

Wennberg and the Swedish connection

After missing all three preseason games, Wennberg was back and looking forward to playing Friday. He was all smiles when asked about being a father for the first time saying it was amazing and that “Life does a 360 on you there.”

Prior to training camp, Wennberg had expressed excitement to see fellow Swedes on the Kraken roster and during camp he’s found himself playing with two of his fellow countrymen. For most of camp he’s centered a line with Johansson and Jarnkrok.

We have yet to see the trio – dubbed the ‘Swedish House Mafia’ by The Athletic’s Ryan Clark – in a preseason game, but it should get its first action Friday in Everett.

“We obviously go really well together,” Wennberg said. “We’ve been really hitting it off… now to finally get a game to try it out, I’m super excited. I feel like we can really do something good so it’s a good test for us to go out there tomorrow and try it out and see how it goes.”

Kraken forecheck clicking in the preseason

One major constant through the Kraken’s first three preseason games has been the forecheck.

Hakstol hasn’t been shy to deploy an aggressive forecheck, often sending two players deep into opponents’ territory to force bad passes, steal pucks, and to generally cause havoc. The forecheck was key to the win in Calgary Wednesday and Hakstol has been happy with it, save for the 6-0 loss in Edmonton.

In that game, Hakstol felt that they couldn’t get into the forecheck enough because they were chasing the Oilers all game due to giving the puck back too easily. Forechecking is a skill and attitude and not every player is built for it, but the Kraken seem to have guys that are.

“There’s certainly a mentality to it and there’s an intelligence to it and we have a lot of guys that are able to get in, come up with pucks or create loose pucks.” Hakstol said. “It’s not just one guy it’s a five-man project so we’ve had some success.”

If you’re watching the games this weekend, keep an eye on how successful the Kraken forecheck is.

The group was smaller Friday as the Kraken returned their junior prospects and made some moves. In that group was 2021 second-round pick Ryker Evans and fifth-round pick Jacob Melanson. When Evans was selected there were some self-proclaimed draft gurus who felt the pick at 35 was a stretch, but the defenseman put a good showing forth at camp.

He showed a keen offensive skill set and instinct with no fear in making plays. Evans will now return to the Regina Pats of the Western Hockey League.