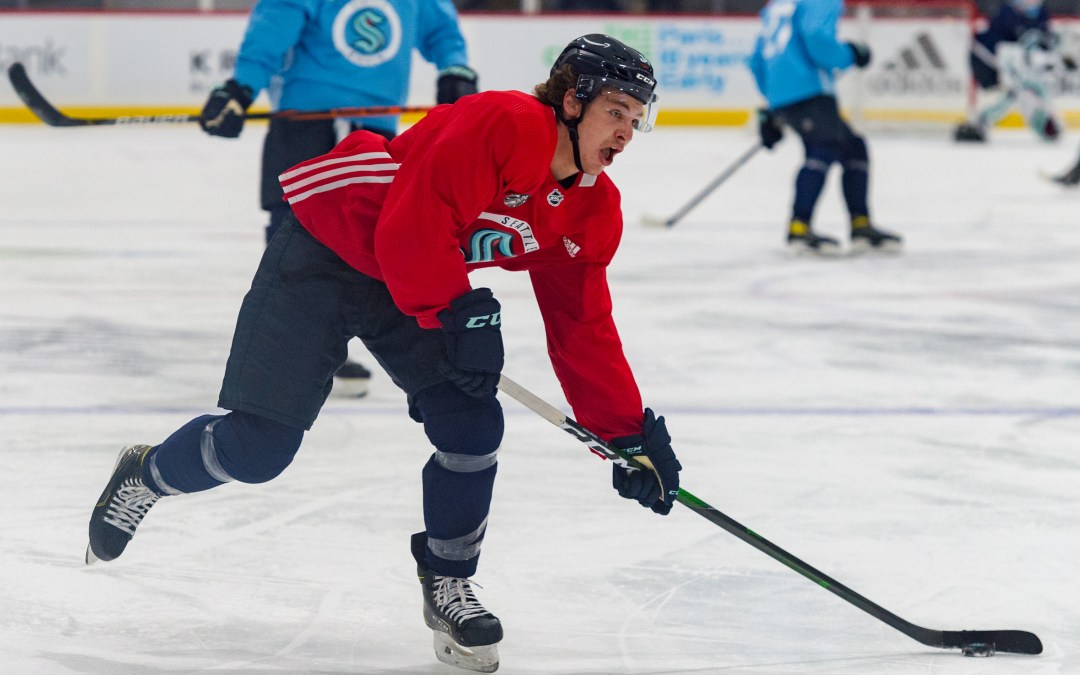 SEATTLE – Yanni Gourde caused a bit of a stir at the Kraken Community Iceplex Monday. It wasn’t for his all-out relentless skating but rather for the color jersey he was wearing during practice as the Seattle Kraken prepared for their final preseason game Tuesday in Vancouver.

It was the first time all training camp that the center was not wearing a no-contact red jersey. Did this mean that he was ready to play? That he had completely recovered from off-season shoulder surgery that was supposed to keep him out of the lineup until December?

“When I wear red, guys are super careful out there and you don’t do much, so I need to get a little bit more bumps in,” Gourde said. “It just doesn’t mean much. I mean it’s just a different color. We’re still working. It’s a work in process to get back in shape and get back, ready to play, but we’re not there yet.”

So, we still don’t know when Gourde will take the ice in a game. He later mentioned that he is not approved for full contact yet but quipped that maybe it was ‘half contact.’

On the ice, he was a ball of energy, flying around the zone during special teams drills. Worth noting, Gourde was killing penalties.

Seattle coach Dave Hakstol said that they are following the process laid out by the team’s medical staff and refused to speculate about a specific return date for Gourde. But he did like what he has seen on the ice out of him.

“We know what he is as a player and what he brings skill wise and ability wise,” Hakstol said. “You see it every day what he brings energy wise, and those are all great things that right now he’s able to apply to get himself ready, he’s just one of those guys. Everything he does is at 110%.”

Early in practice we got a glimpse perhaps of where Gourde will play when he does come back.

Hakstol had Gourde centering a line with Joonas Donskoi and Ryan Donato Monday. Those wingers had previously played with Morgan Geekie and have had some success during the preseason. Monday, Geekie was with Mason Appleton and Calle Jarnkrok.

Kraken get some special teams work in

Seattle spent the bulk of practice Monday working on special teams. It was the first time during camp that they’ve done so.

Previously, the only power play and penalty kill work had been brief and in morning skates on game days. The two units on Monday looked familiar.

The first power-play unit started with Mark Giordano on the point, where he has played in the preseason. Along with him was Alex Wennberg on the half wall and Jared McCann, Jordan Eberle, and Jaden Schwartz up front. Vince Dunn handled the point for the second unit with Geekie on the wall while Donskoi, Jarnkrok and Marcus Johansson manned the forward positions.

With the roster trimmed down and one last preseason game left on the schedule, the lines and combinations feel close to being finalized.

But Hakstol, as most coaches will do, wouldn’t commit to that being true.

“I think it would be a mistake to say this is a projection of what we’re gonna see seven days down the road,” he said. “There’re more pieces and combinations that fit together that are likely. We have a limited amount of time to try things. There’re still one or two more things that we want to take a look at, there’s still competition at different positions. So, all of those three factors are going to be at play tomorrow night.”

During practice the team announced that Carsen Twarynsky and Alex True had been placed on waivers, with the team intending to assign them to the AHL’s Charlotte Checkers. Twarynsky was picked up at the NHL Expansion Draft from the Philadelphia Flyers while True, a former Seattle Thunderbird, was selected from the San Jose Sharks.

Practice play of the day

During the power play drills, Geekie found the puck along the wall. He looked up and flung a seeing-eye pass, through a maze of skates and sticks, that found Jarnkrok who scored with a one-time slap shot.