“Are the Kraken good?” and other important questions that still need answers 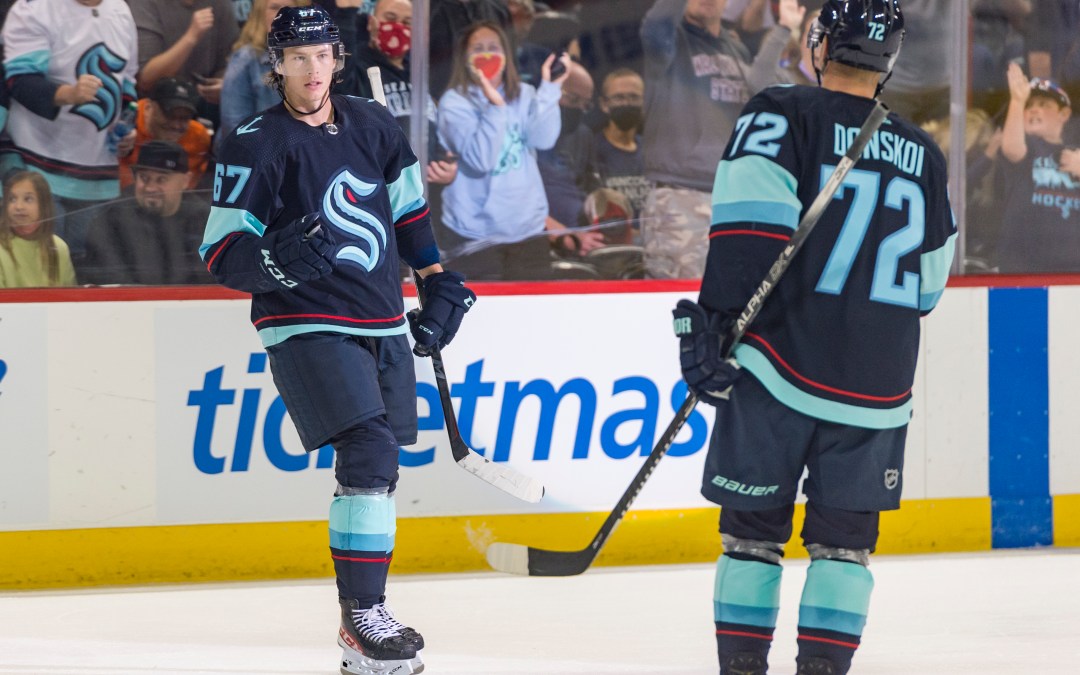 The inaugural slate of preseason games for the Seattle Kraken has been completed. Coming in, there were plenty of questions around how the team would shake out, at least for opening night, and on that front, there are still a few questions lingering.

But the discourse surrounding the franchise was never just about how the roster would look coming out of training camp.

Who will score? How are the goalies? Where does Yanni Gourde slot in? Let’s consider what questions the Kraken actually have answered and what still needs to be worked out.

Who will score for the Kraken?

This has been the biggest question asked by hockey pundits everywhere when they talk about the Kraken. Seattle will almost certainly take a score-by-committee approach, as they don’t have any obvious superstars that we expect to fill the net nightly.

One thing that became abundantly clear in the preseason, though, is that Seattle does have a solid top line featuring Jaden Schwartz, Jared McCann, and Jordan Eberle. That trio has been excellent whenever it has been in the lineup, driving play and constantly creating scoring chances.

Those three players partially answer our “Who will score?” question, but scoring depth wasn’t terribly obvious in preseason. The top line had five goals, while all other forwards combined for just six.

To be fair to the rest of the lineup, we didn’t see the full complement of lines until Tuesday, and with them all there, the Kraken won 4-0 with Vince Dunn scoring twice and Nathan Bastian and Ryan Donato each scoring once. It was a promising development, because that’s secondary scoring on a night when none of the top-three forwards converted.

And while it’s possible Seattle won’t get enough production from the second line and below, the defense corps do look poised to pick up some of the slack, having notched four goals of their own during exhibition play.

Once we get into the regular season and coach Dave Hakstol starts rolling four NHL lines, perhaps we will start to see a little more secondary and tertiary scoring, as we saw on Tuesday. Still, this question has only been partially answered.

Is the defensive depth as good as people thought?

Yes, the defensive depth really is awesome. Saturday’s game against the Calgary Flames showed just how solid this team can be in its own end, despite the four goals that were allowed. As Hakstol pointed out after the game, there was almost nothing coming from inside, and even the short-handed goal that Seattle yielded came from an outside shot.

Allowing 13 shots in an entire game is almost unheard of in the NHL, and doing so without dressing Mark Giordano is all the more impressive, even if Calgary didn’t have its best lineup that night.

How good can the goaltending be?

We still think the answer to this question is, “Really friggin’ good.” Philipp Grubauer has looked as solid as ever, especially on Tuesday when he stopped all 38 of Vancouver’s shots. Even in practice, he has been making dazzling saves, so as of now, there’s absolutely nothing to worry about from Seattle’s No. 1A.

It’s been a bit of an odd camp for the No. 1B, Chris Driedger, and he probably gave up more goals than he would have liked in the games. In fact, after the 4-1 loss on Saturday, he called two of the goals he allowed “soft.” And four goals on 13 shots is nothing to write home about, but man, what an awkward game to be in from a goalie’s point of view. He only faced two shots on goal in the first period, and one of those came through traffic, deflected, and somehow found its way into the back of the net. For a netminder, you need to be in the flow of the game, feeling the puck regularly, and that just never happened on Saturday. It’s almost as if the defense was too good.

And in the team’s first road preseason game, Driedger allowed five goals in two periods, but was completely hung out to dry with the Kraken trotting out a shell of its best lineup against the likes of Connor McDavid and Leon Draisaitl. Take his preseason results with a grain of salt, because Driedger is an excellent goalie who we don’t expect to have many games like what we’ve seen from him so far.

As for the Kraken’s third netminder, Joey Daccord? Well, we have a relatively small sample size to review, but he was outstanding in all his appearances. It’s comforting to know that if Seattle should lose one or both of its goalies to injury, there is another capable option waiting in the wings in Charlotte.

What happens when Yanni Gourde and Colin Blackwell return?

This one is difficult to answer, especially when considering how Hakstol will deploy Gourde. He can slot him in to center the second line and bump Wennberg down or put Gourde on the third line, but either move potentially pushes Geekie down to the fourth. We already know from past experience in Carolina that the fourth line is not the right fit for Geekie, and he’s shown that he has a skill set for a bigger role.

Blackwell’s presence creates a little less of a conundrum, because he can slot into the bottom six, where there’s less of a ripple effect. His inclusion does mean the exclusion of somebody like Riley Sheahan or maybe Nathan Bastian, though.

Getting a full roster with too much NHL talent is always a good problem to have. We will leave this question “outstanding,” but this will work itself out in due time.

Are the Kraken good?

Multiple advanced analytics models have the Kraken finishing in the 90’s for points, with Dom Luszczyszyn predicting 97.1 points. That should get the Kraken into the postseason.

We’ve seen flashes of brilliance in the preseason and enough skill and resilience to believe that Seattle won’t stink. But until it gets a few regular-season games under its belt with its full NHL lineup, we simply do not have enough data to say how this team will be with any level of certainty.

We’re optimistic, but we will leave this question in the “outstanding” category.