How the Seattle Kraken match up with their Pacific Division opponents 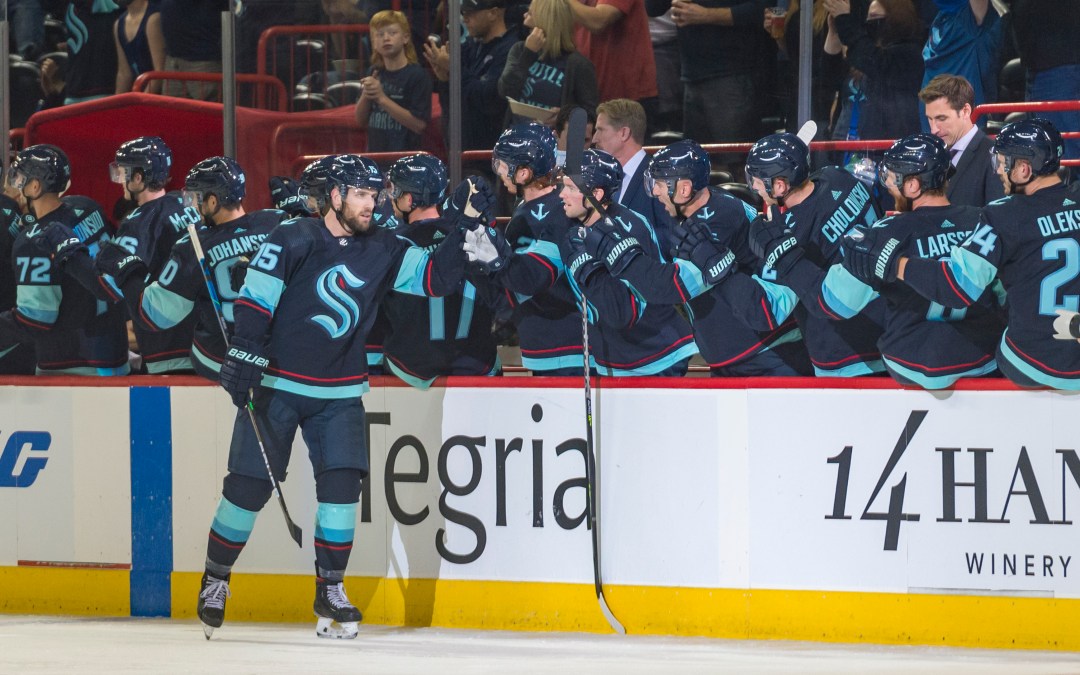 The Seattle Kraken will make the playoffs in year one because the Pacific Division is weak. That’s the prevailing thought about the Kraken’s chances of doing something special during their inaugural season.

Is the Pacific Division weak?

Despite the one-year realignment last season only the Vegas Golden Knights and Edmonton Oilers made the playoffs, and things aren’t looking that much better for the division this season.

We know what the Kraken have to offer. Up front they are armed with solid, two-way forwards. They don’t have a true elite center, but there is depth down the lineup which makes them competitive in the Pacific. Seattle’s top line with Jared McCann, Jaden Schwartz, and Jordan Eberle has looked great during the preseason and will lead the way.

Down the lineup there are players who have 20-goal potential along with young players like Morgan Geekie who could be on the doorstep. All that and we have yet to see how the Kraken lineup looks with Yanni Gourde and Colin Blackwell in it.

On the back end, Seattle’s defense is solid, led by veteran Mark Giordano who will help with secondary scoring and man the top power-player unit. The defense is playing in front of a goalie tandem that may be the best in not only the Pacific Division but the NHL. Philipp Grubauer is coming off a season in Colorado that earned him a Vezina nomination and he’s been lights out during camp and the preseason.

How do the Kraken match up with their Pacific Division mates? Here’s a look:

Forwards: Vegas has two of the more dynamic forwards in the league with Max Pacioretty and Mark Stone. Last year the two combined to score 45 goals on the Golden Knights’ top line. Pacioretty has topped the 30-goal mark six times over his career while Stone is the ultimate two-way forward, adept at disrupting via the forecheck and stripping pucks almost at will.

The literal hole in the Vegas forward group last year was down the middle, and they still do not have a clear top-line center. Chandler Stephenson centered the top line and filled in adequately while William Karlsson played on the second line. In the playoffs the Golden Knights offense disappeared in part due to play down the middle.

They looked to add depth to their forwards in the offseason with trades for former Philadelphia Flyers high pick Nolan Patrick and also Evgenii Dadonov. Patrick will start at center and the bulked up third line gives Vegas a deeper and perhaps more consistent forward group. Advantage Golden Knights

Defense and goaltending: After a Vezina Trophy win the Golden Knights parted ways with Marc-Andre Fleury and traded him to Chicago this summer. He’ll go down as a Vegas legend after leading the Golden Knights to the Stanley Cup Final in year one, but they’ll now hand the net over to Robin Lehner full time. Lehner and Fleury took turns over the past two years and Lehner is a top goalie in his own right. There should not be a huge drop off, if any, for Vegas here.

Defensively, the Golden Knights are as strong as any team in the league. Shea Theodore and Alex Pietrangelo are two offensively gifted defensemen and power-play quarterbacks. Theodore averaged .79 points per game last season which was only behind Stone and Pacioretty for Vegas. Those two are the flashy pieces on the Golden Knights back end, but Alec Martinez and Brayden McNabb round out the group well. Advantage Golden Knights

Forwards: All conversations about the Edmonton forwards begin and end with Connor McDavid and Leon Draisaitl. The Oilers two top centers are also two of the world’s top centers. McDavid is coming off a spectacular MVP season just a year after Draisaitl won the Hart Trophy. The trouble in Edmonton is that the Oilers don’t get much from anyone else up front.

Last season when the two were on the ice together at 5-on-5, the Oilers dominated in every possession number you look at and scored 33 goals for and allowed 17 against. When neither were on the ice, the Oilers were outscored 52-29. Edmonton is hoping to find more scoring depth from guys like Kailer Yamamoto, who has been inconsistent, and Zach Hyman who they brought in as a free agent from Toronto. While the Kraken may have slightly more depth, with the stars at the top of the lineup, it’s hard to bet against the Oilers here. Advantage Oilers

Defense and goaltending: As elite as the Oilers are at the front of the lineup, the back end has been a struggle over the past few years. The defense has been troublesome for Edmonton and it doesn’t help that perennial top-six blueliner Adam Larsson is now in Seattle. Darnell Nurse is at the top of their pairings and is a top-end guy in the NHL, but the roster gets slim after that. Edmonton brought in a well-past-his-prime Duncan Keith to help. Will it?

In net it’s the return of 39-year-old Mike Smith, who rebounded for a nice season last year, and Mikko Koskinen. The best way to describe both goalies is… inconsistent. Advantage Kraken

Vancouver Canucks versus the Seattle Kraken

Forwards: The Canucks are looking for a bounce back year, and if enough goes right for them, they just might do so. They are strongest up front, powered by the recently re-signed Elias Pettersson who is one of the brightest young stars in the NHL. They’ll need a better year out of J.T. Miller this season, but they also have Bo Horvat and Brock Boeser returning. To bolster their forward group they added Connor Garland and Jason Dickinson via trade and a promising rookie in Vasily Podkolzin.

They can throw three solid lines at you which should lead to a consistent offensive attack. Advantage Canucks

Defense and goaltending: In net the Canucks feature the talented and young Thatcher Demko. In his first season as the number one starter Demko was a solid .915 goalie but is a step behind Grubauer at this point in their careers.

It’s in front of the goalie where there are issues, though not with Quinn Hughes. Hughes, who also just re-signed with the Canucks, is already a star and the 21-year-old speedster is only going to get better and more dangerous. After that, the Canucks defense is sketchy. They brought in Oliver Ekman-Larsson in hopes he can bolster a top six that struggles in its own end. That’s a risk. Advantage Kraken

Forwards: The Kings have been threatening with a rebuild for a couple years now, and they’ve collected young, impressive talent but still may be a season away from truly cashing in. The ageless wonder Anze Kopitar still leads the way as their top center along with winger Dustin Brown. They’ve added Viktor Arvidsson and Phillip Danault which gives them a bit more veteran experience and production to their top six.

Los Angeles’ exciting forwards include Alex Turcotte (drafted fifth overall in 2019) and Quinton Byfield (drafted second overall in 2020) who have yet to impact at the NHL level but are certainly on the come. If those guys are ready, the Los Angeles rebuild is in full swing. Seattle has more depth in their forwards for the time being. Advantage Kraken

Defense and goaltending: Drew Doughty leads the Kings defensively again this year and at 31 years old is still productive. His best seasons are in the past, however, and Los Angeles has surrounded him with younger guys who will need to step up if the Kings want to make the playoffs this season.

Cal Petersen and Jonathan Quick are the goalie duo again this year and that is less than exciting. Petersen took the bulk of the starts last year as the 35-year-old Quick failed to get his save percentage above .900. The Kraken are much better equipped in net. Advantage Kraken

Calgary Flames versus the Seattle Kraken

Forwards: When you look at the Flames up front it’s a head scratcher as to why they weren’t better last season. Johnny Gaudreau can score and Matthew Tkachuk – who is still just 23 years old – make up a talented top line. Elias Lindholm centers a second line with Dillon Dube and Andrew Mangiapane which has the potential to make up a tough top six.

After those guys it falls off a bit for the Flames. Will that younger second line step up enough to provide the Flames with one of the best groups in the Pacific? They’re going to have to. Advantage Kraken

Forwards and goaltending: Seattle stripped the Flames of their best defenseman when they selected Giordano at the Expansion Draft and Calgary has yet to replace him. Their top pairing could be made up of Chris Tanev and Nikita Zadorov who are two serviceable blueliners.  Former Tri-City Americans star Juuso Valimaki has the potential to be great but at 23-years-old hasn’t shown it quite yet.

A season ago the Flames landed former Canucks goalie Jacob Markstrom with a $6 million free agent contract. That got them 31 starts with an average .904 save percentage. Behind him the Flames have an inexperienced Daniel Vladar. Advantage Kraken

Forwards: The rebuilding Sharks aren’t devoid of talent up front. Their top six still contains players like Logan Couture, Timo Meier, and Tomas Hertl. Those three guys can score and will win the Sharks a few games. After those three however, the pickings are of the slim variety. They’ve added veteran Nick Bonino, who will help them down the middle, and still have the troubled Evander Kane, but it’s not enough to make this a playoff contending team.

San Jose drafted William Eklund seventh overall in July and the Swede is loaded with potential. He’s got a shot of sticking with the Sharks, but at 18, he’s not going to make a difference just yet. Advantage Kraken

Defense and goaltending: Brent Burns, Erik Karlsson, and Marc-Edouard Vlasic are as good a defensive group you could have asked for… five years ago. Now, they are declining in production, aging, and weighing down the Sharks with high-end contracts totaling just over $26 million for the three. That’s not a good situation and there’s no clear way out for San Jose.

In goal the Sharks picked up Adin Hill from the Coyotes, and he looks ready to get a shot at taking over an NHL net. The former Portland Winterhawk has yet to play more than 19 games in one NHL season but showed promise during his tenure with the Arizona Coyotes organization. He’s 25-years-old and will probably suffer some growing pains, but his future looks good. Advantage Kraken

Anaheim Ducks versus the Seattle Kraken

Forwards: The Ducks are in a serious rebuild and their best forwards are their youngest. Trevor Zegras is coming off a good AHL season in San Diego and a monster World Junior Championship performance where he scored nine goals. He played 24 games in the NHL last year and averaged .54 points per game which was second only to Maxime Comtois in Anaheim. The talent is there but at 20 years old he’s probably not ready to be an elite center just yet.

Ryan Getzlaf is back for another year with the Ducks, but he’s coming off a five-goal season and offers little more than leadership and nostalgia. Advantage Kraken

Defense and goaltending: Chosen sixth overall by the Ducks in the 2020 NHL Draft, Jamie Drysdale turned in an impressive season in the AHL last year. He’s 19 years old now but is the future for Anaheim’s top pairing. Cam Fowler and Kevin Shattenkirk are nice veteran pieces, but overall, the Ducks will struggle here.

In net John Gibson appeared to be the league’s next young goalie when he posted a .926 save percentage in 2017-2018. In the four seasons since he’s seen that number drop each year down to last season’s .903. Is it him or the team in front of him? Advantage Kraken