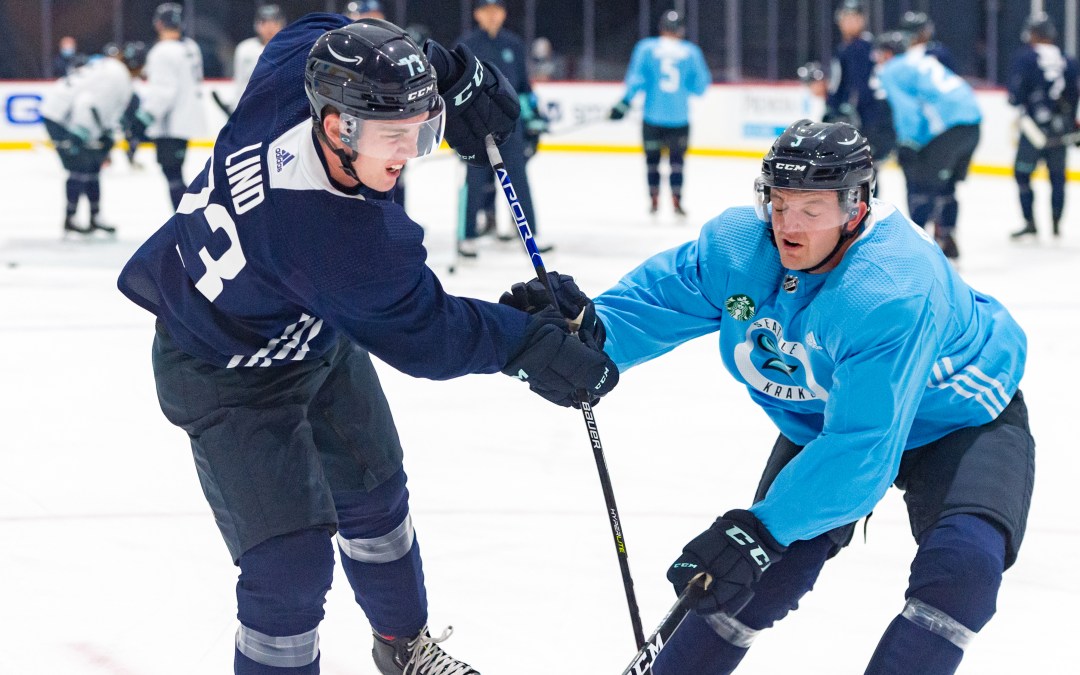 Who doesn’t love a good revenge game? Because that’s what coach Dave Hakstol gets to experience tonight as the Seattle Kraken take on the Philadelphia Flyers. Well… sort of. He did visit as an assistant coach with the Maple Leafs a couple seasons ago, but this is his first game back as a head coach, so that’s a big deal, right?

“It’s always nice to come back,” Hakstol said Monday morning. “Obviously I have a lot of great memories here, and a lot of good friends, and obviously as you get to this time of day, it kind of flips full circle right to the competition of the game tonight.” Now those are some fighting words!

Ok, maybe it’s not really a “revenge” game per se, but Hakstol does certainly have a history with the Flyers organization, which hired him straight out of the college ranks back in 2015 and eventually relieved him of his duties after the team got off to a 12-15-4 start in 2018.

Hakstol also gave the update on Monday that Vince Dunn is still day-to-day, though he did participate in morning skate, so we will again see both Carson Soucy and Haydn Fleury in the lineup.

The only real change to the lineup comes up front.

After Alex Barre-Boulet made a huge play to set up Alex Wennberg in his first game with the Kraken on Thursday at Nashville, and after hearing what Hakstol said about his play that night, there was a general sense that he may have a role in the lineup moving forward. On Sunday in Columbus, he only saw the ice for a few seconds of the third period and spent the rest of the game on the bench.

Tonight, Barre-Boulet is being scratched in favor of Kole Lind, who makes his official debut with the Kraken, though he did appear in several preseason games as well. Lind, who was a well-liked prospect for the Vancouver Canucks before being selected by Seattle in the Expansion Draft, has seven games of NHL experience but does not yet have a point.

There’s a strong connection to the Pacific Northwest in this evening’s game, as Carter Hart is expected to be between the pipes for the Flyers. The former Everett Silvertips superstar burst onto the scene as Philadelphia’s full-time starter three seasons ago as one of the youngest goalies ever to hold such a role. He faltered last season, though, posting an unimpressive .877 save percentage and 3.67 goals against average in 27 games.

Hart is looking to get his young career (believe it or not, he’s still just 23 years old) back on track.

We may also see veteran center Nate Thompson, an Alaska native and former Seattle Thunderbird, suited up for the Flyers tonight.

As for the rest of the Flyers, the roster looks a bit different from what we’ve seen in the past. Cam Atkinson was acquired in the offseason for Jake Voracek, while Shayne Gostisbehere was jettisoned and Ryan Ellis and Keith Yandle were added on the back end.

The Flyers have played just one game so far, a 5-4 shootout loss to the Vancouver Canucks on Friday.

For lack of a better guess, we’re predicting that Lind will slide in with Wennberg and Joonas Donskoi, though Hakstol gave a big “maybe” on his forward lines in his press availability, so we could see some shuffling.