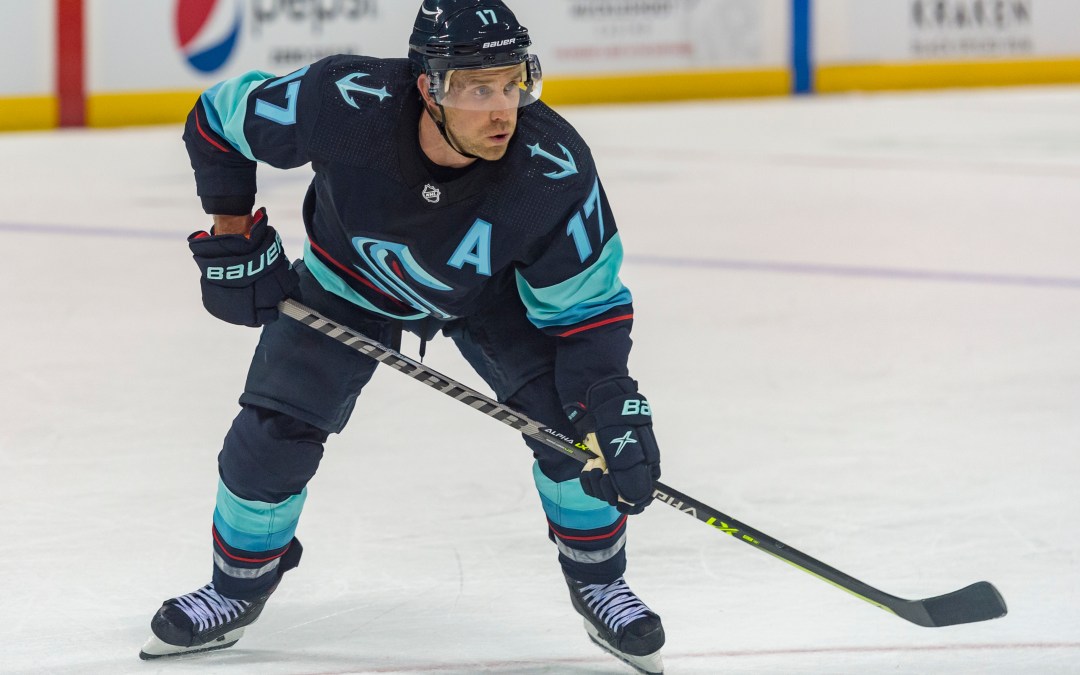 Ranger goalie Igor Shesterkin followed up a dazzling 31-save shutout of the Columbus Blue Jackets on Thursday with another outstanding performance against the Kraken, stopping 31 of 32 this time and carrying his team to victory.

It’s a disappointing loss for the Kraken, no doubt, as they finish their first homestand with a 2-2-0 record, bringing them to 3-5-1 overall. This team is still learning and building, and coach Dave Hakstol was rightfully pleased with the effort. But not getting at least a point out of a game like this has to hurt.

The Kraken started the first period against the Rangers in similar fashion to how they have started several other games this season… by conceding an early goal.

Chris Kreider—who has had a hot start to the season—streaked into the Kraken zone on a two-on-one with Mika Zibanejad. He looked off Zibanejad and snapped an absolute missile over Grubauer’s glove and right under the crossbar. It was one of those that hit the back bar and came out so quickly that not everyone in the arena was sure it had gone in. Indeed it had, and just like that, the Kraken trailed 1-0 3:38 into the first period on Kreider’s seventh of the season.

As we’ve also seen in prior games, Seattle began pushing back after allowing that goal, but Shesterkin stood tall to turn away several good chances, especially by Morgan Geekie and Jaden Schwartz.

Kreider had a bid for his second of the night and fourth in two games midway through the period when a pass hopped off of Vince Dunn’s stick at the offensive blue line. Kreider jumped on it and raced through the neutral zone, but Grubauer came up big and steered the shot away with his blocker to keep the Kraken within one.

Do the Kraken love second periods or what?

Once again, Seattle came out flying in the second and owned the puck for the bulk of the period. When the horn sounded, they had an 11-2 advantage in shots on goal during those 20 minutes of play.

Midway through the second, Shesterkin was continuing his dastardly ways and was especially unkind to Schwartz, who continues to look for his first goal as a Kraken. Shesterkin stole a sure goal from Schwartz by sliding from left to right in a full split. He lost his stick on that play, but with his team scrambling, he still managed to stop two shots by Mark Giordano and one by Ryan Donato to get a needed whistle.

Six minutes later, Jordan Eberle broke through. He took a simple drop pass from Schwartz at the right face-off dot. In one motion, he spun onto his backhand and lifted a shot over Shesterkin’s glove, clearly catching the netminder off guard with the deceptive shot.

Eberle’s second of the season knotted things at 1-1 at 13:46, and though Seattle continued to push, that score would remain through the end of the second period.

Compared to a completely dominant second for Seattle, the third was a bit more open for interpretation as to who had the better of the play.

With eight minutes left, Haydn Fleury forced a turnover at the Ranger blue line, and suddenly Brandon Tanev was in alone with Shesterkin. He deked and tried to tuck the puck around the outstretched pad of the Ranger netminder, but couldn’t get it to go. The Rangers countered, and off the rush, Artemi Panarin pulled up at the top of the left circle. He then found a trailing Adam Fox as he came over the blue line, and Fox made no mistake.

This, ladies and gentlemen, is why Fox won the Norris Trophy last season and why Panarin continues to be one of the more dangerous forwards in the NHL.

With Grubauer pulled for an extra skater in the closing minutes, the Kraken did get one last good push to try to level the score a second time. A shot from the point got deflected by Yanni Gourde, and he found the rebound and with one hand on his stick poked it past Shesterkin. It just bounced off the base of the post, and again, the Rangers countered and Barclay Goodrow ended up with an empty-net goal at the other end to seal it.

Things don’t get easier on Monday

Hakstol has talked a lot about improving the team’s play in transition. Seeing New York score its goals off the rush Sunday was a bit surprising, especially after we had watched Seattle clog up the neutral zone to perfection at times on this homestand. Seattle’s coach gave credit to the Rangers after the game, though, saying that’s one of the things they do especially well, and his group knew that coming in.

As Seattle goes right back to work against Connor McDavid and Leon Draisaitl in Edmonton on Monday, it will need to do a better job of cutting down those odd-man opportunities, or it could be a painful night.

By the way, at Hakstol’s media availability on Sunday night, we asked him what the Kraken need to do to beat Edmonton, which has a lot of starpower. At the end of a relatively long presser, Hakstol looked at us and said, “Well, first off, we need to wrap this up so we can get out of here.” That got a good chuckle in the room.

Kraken forward Jared McCann was a late scratch from Sunday’s game, as the team announced that he and assistant coach Paul McFarland had been placed in COVID protocol. Last time Seattle had players in protocol, they ended up being cleared in time for the season opener in Vegas, but Hakstol did not want to speculate on what might happen with McCann.