By the numbers: Seattle Kraken trends 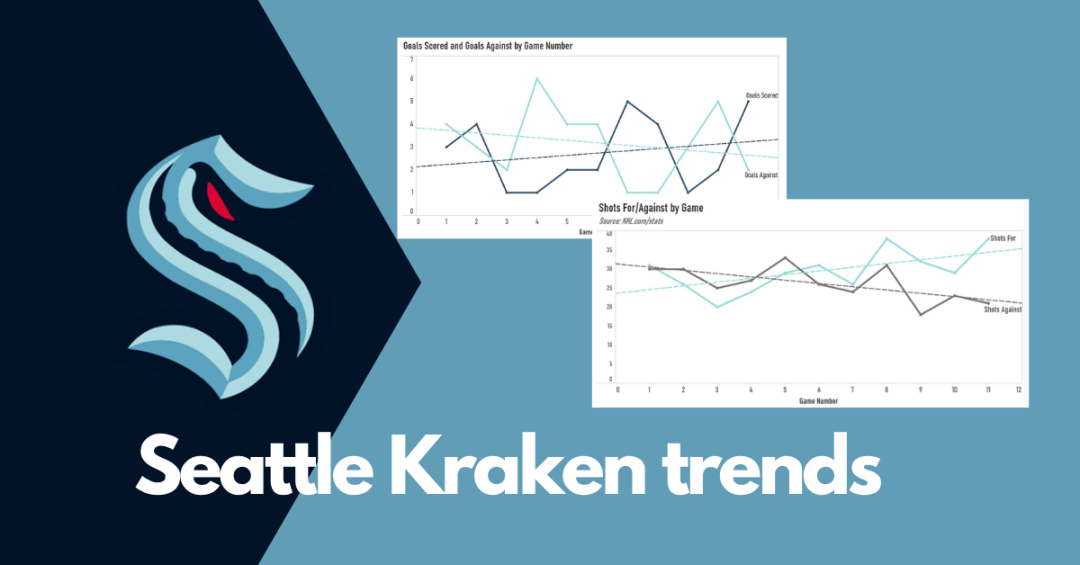 Through the first eleven games of their inaugural season, the Seattle Kraken find themselves at 4-6-1 and at the bottom of the Pacific Division standings. We at Sound Of Hockey are bullish on how they have been playing lately, so we decided to dig into the numbers to identify any trends and validate if our sense of optimism is justified.

Goals scored and goals against

Let us look at these same numbers by game so we can evaluate if the Kraken are trending in the right direction.

The goals scored is slowly trending in the right direction as well. Up until the game on Thursday against Buffalo, the team was feeling snakebitten after getting Shesterkinned against the Rangers last Sunday and having several near misses against the Oilers on Monday.

Shots taken and shots against

At 29.5 shots per game, the Kraken are 25th in the league, which correlates very well with their goals per game. On the other side, they are averaging the lowest number of shots against in the league which should be considered a very positive sign.

Here are how those numbers project by game.

These trends should give Kraken fans a sense of optimism. Shots for (taken) per game have been on a steady incline while shots against have been on a steady decline. The Kraken have outshot their opponent over the last six games, and if they can maintain that trend, they should start winning more games than they lose.

Of course, it is not always about quantity, as sometimes you need to consider the quality of the shots being taken. To analyze the quality of shots we’re going to look at five-on-five high-danger and medium-danger shot counts by game.

This trend should be considered positive and could be the impact of the “learning to play together” narrative of an expansion team that is compiled of a bunch of players that had limited playing time together before this season.

Wrapping it all up

This is a case where the eye test is aligning to the analytics. We do not like to get pollyannaish about the team’s outlook, but there are some objective signs in the analytics that this team is getting better and is trending in the right direction. It will be interesting to continue to monitor these trends and see if the goals and therefore wins start to follow.

If you have any questions, insights, or feedback, let us know in the comments section.