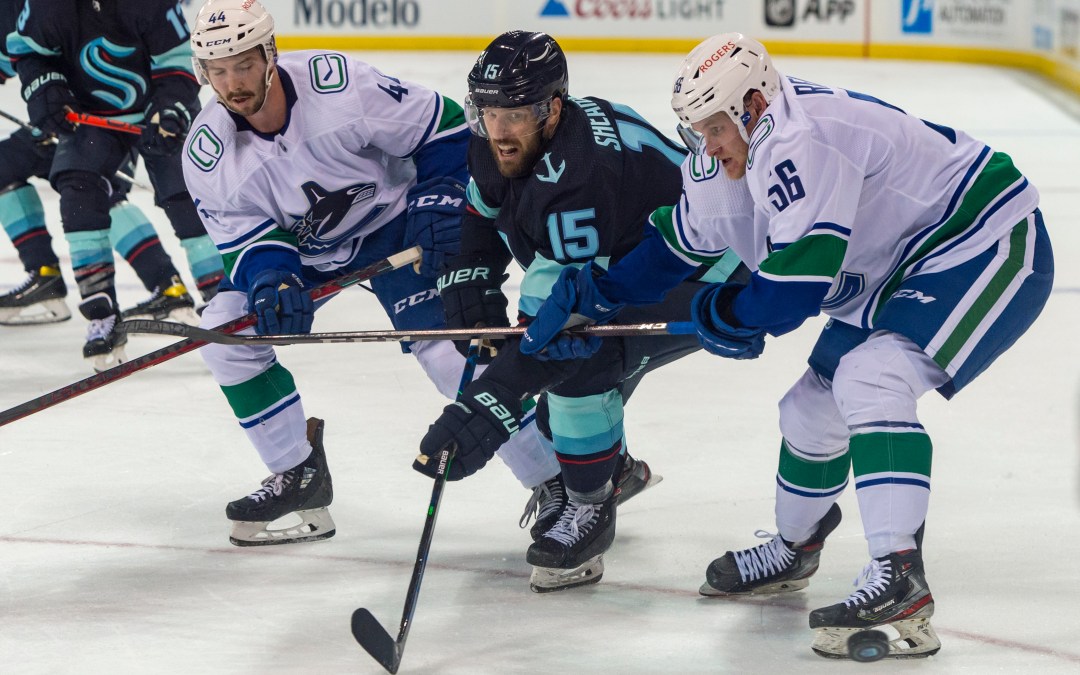 Playing on the fourth line is not the most glamorous role on a hockey team, but it’s an important one.

If you have three guys who can win some shifts, get the puck into the other team’s zone, and create some energy, you’ll have a stronger attack. That’s the role that Seattle Kraken center Riley Sheahan is playing and he’s doing it well.

“I think when you’re in that role you just try to find chemistry with the guys you’re playing with and be effective on the penalty kill, and do all the little things right,” Sheahan said after Seattle’s practice Wednesday. “I’m having fun with it. We got a great group and I think our record doesn’t show the way we’ve been playing. We’ve been pretty happy with the way we’re playing, just got to fix up a few things and then generate some wins.”

Sheahan signed a one-year contract with the Kraken in September to be a depth forward. The 29-year-old has played over 570 NHL games with the Detroit Red Wings, Pittsburgh Penguins, and the Buffalo Sabres.

With Seattle he’s averaging just over 11 minutes of ice time a game, is a part of the penalty kill, and has good puck possession numbers. He’s scored a goal but that’s not the role he’s in with the Kraken.

“Usually, you’re starting in the D-zone or neutral zone and try to set the team up for some O-zone draws or some O-zone play,” he said. “Just grind and kind of create some havoc for the other team and get them on their heels and produce when we can. Then just do the little things right and try not to give up too much and just play a strong game.”

Sheahan has played mostly with Nathian Bastian on one of his wings. Coach Dave Hakstol has cycled other wingers through the fourth line such as Ryan Donato and recently Max McCormick.

When Sheahan and Bastian are on the ice together they’ve generated 53 percent of the unblocked shot attempts and don’t allow a lot of quality shots with an expected goals for (xGF%) percentage of 55.

“He’s a great guy,” Sheahan said about Bastian. “He’s easy to talk to and we can communicate, which always helps. Obviously, he’s a big body and he’s got a lot of skill. I think when we’re on our game, we can really be big up there, generate some O-zone shifts and hold onto it. And I just enjoy playing with him.”

Seattle plays Buffalo Thursday at Climate Pledge Arena but Sheahan isn’t looking at the game as a ‘revenge’ game. He only spent one season with the Sabres and says he made a lot of good friends on the team.

“It’ll be good to see those guys and have a couple laughs,” he said.

— Jared McCann was not at practice Wednesday and remains in Covid protocol.

— Injured forward Colin Blackwell skated prior to practice again but Hakstol said there is no update on his return target.

— Chris Driedger was back in net at practice after coming off of injured reserve the day prior while Joey Daccord was returned to Charlotte of the American Hockey League. As to how long he’ll have to wait to get a start in net Driedger said, “I haven’t been told. I’m sure they’re talking about it, but I’m not privy to those conversations. I stop the puck when they tell me to.”