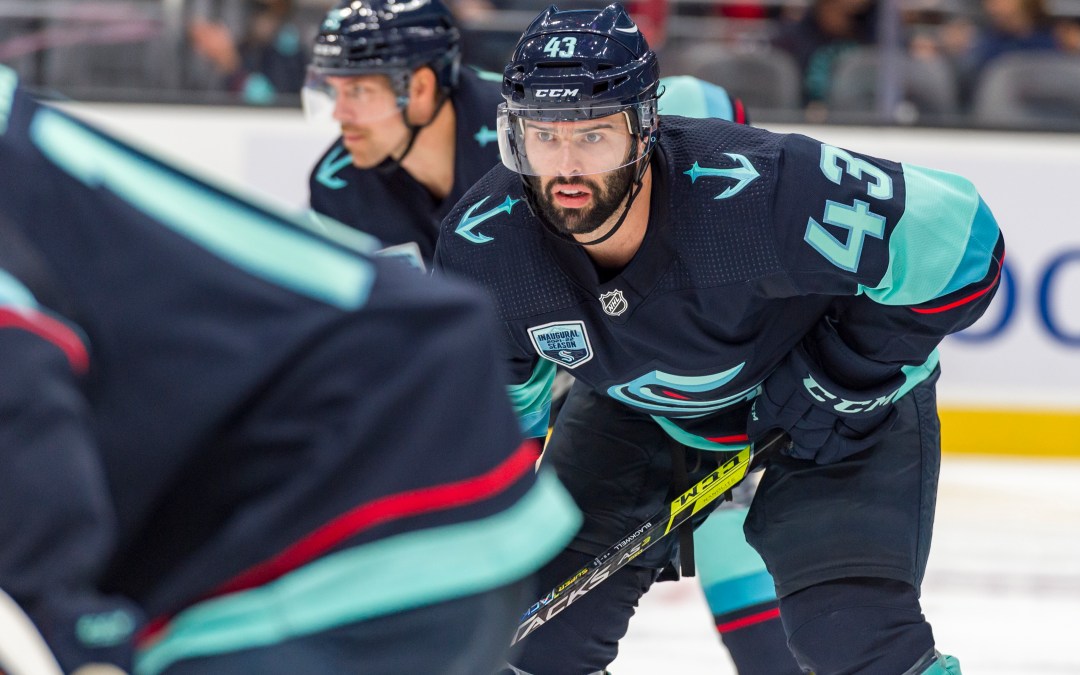 Call it a hunch, but sometimes you just have a feeling that things are going to play out the way you want. We had that feeling on Friday morning after the Kraken skated at Climate Pledge Arena in preparation for their game against the electric Edmonton Oilers.

From the active roster, only Carson Soucy addressed the media after the team’s skate, but he was noticeably more jovial and upbeat than we saw from players before they snapped their painful six-game skid on Nov. 21. Winning has that effect on teams, from the players to the coaches to the media covering them to the fans watching them. Everyone involved gets a mood lift when the pendulum swings back the other way, and that is exactly what has happened for Seattle over these past two weeks.

On paper, this was always going to be a tough one. Seattle is still without its top two scorers in Jordan Eberle and Jaden Schwartz and entered the game trailing Edmonton in the standings by a whopping 14 points. So there was some concern that our morning hunch would prove to be dead wrong and that the Oilers could come in and steamroll the Kraken. After all, they did just that when these two teams met for the first time at the beginning of November.

But this is a different Seattle team now, one that has found a winning formula over this 5-1-1 stretch and has stuck to it, regardless of who is in the lineup and regardless of the opponent. Sure enough, the Kraken put together arguably their most complete game of the season on Friday and took down one of the best offensive teams in the NHL.

Here are our three takeaways from a thrilling… and we mean thrilling 4-3 home Kraken victory over the Edmonton Oilers.

Takeaway #1: Kraken had everyone contributing to beat Oilers

In the past week and change, the following statements were true at some point:

About 13 minutes into the second period, Sheahan picked off a Zack Kassian pass just outside the Edmonton blue line and quickly turned it back up to Lind who was exiting the zone. Blackwell was heading in the right direction, so Lind made a little touch pass to his linemate. With a head of steam already built up, Blackwell sprinted in, split the defense like he was Connor McDavid, waited out netminder Stuart Skinner, and threw a backhander upstairs for his second goal as a Kraken.

Now, we move onto a separate subject, but we promise it’s related. Adam Larsson took a defensive-zone penalty with 91 seconds left, when he accidentally caught Leon Draisaitl up high with the shaft of his stick. The penalty came after an absurd icing call, so perhaps that penalty shouldn’t have happened, but that’s neither here nor there. With Skinner pulled, the Oilers had a terrifying six-on-four advantage. The Kraken were doing everything they could to hold McDavid and Draisaitl at bay, and in the last minute, who comes over the boards? Lauzon and Sheahan.

That personnel decision was also made with Draisaitl and McDavid on the ice together—as they were for practically the entire third period—doing everything they could to find an equalizer. But the equalizer never came, because the unsung guys stepped up and contributed. Everyone played a part in Friday’s win, and that is what can make winning a sustainable endeavor for this still very new club.

Takeaway #2: Are slow starts becoming a thing of the past?

There was a time when the Kraken were almost always chasing games. If they didn’t give up a goal on the first or second shot of the game, they’d let the first period drift past, spending the whole frame defending and eventually conceding the first goal. With only a handful of exceptions, it didn’t matter the opponent, that was just how it was working out almost every night.

Against Buffalo, the Kraken scored three goals in the first period and took a 3-0 lead to the dressing room. Against Florida, Eberle scored 2:22 into the game, and the first period eventually ended with Seattle leading 2-1. Heck, even against Detroit, in which the score was officially 0-0 after 20 minutes, the Kraken scored first, but it was disallowed due to incidental contact with the goalie.

On Friday, the Kraken buzzed Skinner from the opening face-off with a couple chances. Then Ryan Donato carried a puck into the offensive zone on a three-on-two rush with linemates Joonas Donskoi and Yanni Gourde. Donato put a cross-ice pass right in Gourde’s wheelhouse, and Gourde blasted away, beating Skinner at 49 seconds.

“Every time you can start with a one-goal lead, you take it,” Gourde said with a smirk. “You know they have a tremendous team. They are so talented, so good, so you got to respect their skill. So getting the first one was a little bit of a relief.”

It was absolutely the best opening ten minutes we’ve seen at home from this team, yet another sign that things are continuing to trend up for the Kraken.

Takeaway #3: The Kraken are showing they can beat anybody

What’s most impressive about the Kraken racking up points in six of their last seven games is that most of the wins have come against elite teams like the Oilers. There couldn’t have been too many folks in the hockey world that expected Seattle to come out on top Friday, especially considering the injuries the team was dealing with.

The formula Seattle is using works against any team, though, no matter the caliber. It’s fast starts, opportunistic scoring, sound defensive structure with relentless shot blocking, and stout goaltending. With Philipp Grubauer stopping 29 shots, those boxes were all ticked again, and the result was a victory against a team that features two of the world’s best players.

The way the Kraken managed Oilers superstars McDavid and Draisaitl was also impressive. Sure, Draisaitl got an easy goal in the first period, after a beautiful passing play that showed why Edmonton has the league’s best power play. And yes, McDavid deflected a shot through Grubauer in the third period that brought the Oilers back to within one. But the dynamic duo did not own the game the way they did in Edmonton on Nov. 1.

“Those two superstars are going to get their chances,” Larsson said after defeating his old team. “You just have to limit how many, and I thought we did a pretty good job of that.”

Larsson, by the way, spent five seasons defending against those two players in practices, so he knows them well. “Obviously, Connor can make you look stupid one-on-one,” he said. “You need to have support, and you need to have help, and I thought today it was a five-man effort when they were out there, and that’s what you have to do.”

Taking stock, that’s Kraken wins against Alex Ovechkin and the Capitals, Sebastian Aho, Andrei Svechnikov, and the Hurricanes, the previously undefeated-at-home Panthers, and now Draisaitl, McDavid, and the Oilers.

That’s something, folks. If the Kraken keep playing like this, they could start climbing the Pacific Division standings very soon.

Kraken assistant coach Paul McFarland took an errant clearing attempt by William Lagesson right off the noggin during the first period. We could tell even from far up above that it had done some damage after he got attention from the team’s medical staff. Replay confirmed that it did, in fact, do some damage.

After the game, Hakstol joked, “You know, the NHL Network was just on our TV, and he wasn’t mentioned as first star. He didn’t flinch, didn’t leave the bench, didn’t miss a shift. He’s probably concussed, I don’t know.” He then added, “I’m actually glad that one hit him, because I didn’t see it.”