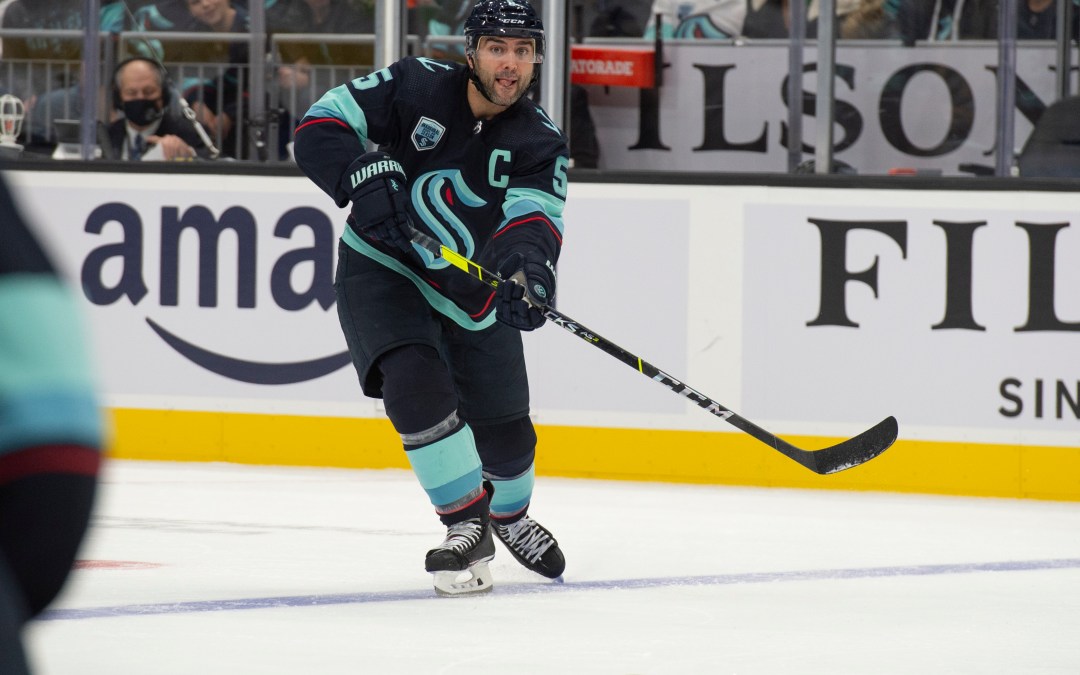 It’s been a season of firsts for the Seattle Kraken, but being the first team to lose to the Arizona Coyotes was not a first they wanted any part of.

It was a loss for the expansion team that could only be described as ‘bad.’

After giving up the lead with just over six minutes left in the game, and with Philipp Grubauer at the bench for an extra skater, Seattle tied the game at 18:42 on a Mark Giordano slap shot, and it looked like they would at least salvage a point by forcing overtime.

But 13 seconds later, Adam Larsson turned the puck over behind his own net, and it was passed out to Lawson Crouse who scored the go-ahead goal on his second of the night.

The Kraken stormed out of the gates Saturday and Jordan Eberle scored at the 15 second mark with a backhand from in close followed by a Yanni Gourde goal at the 59 second mark, scored off the rush. That chased Coyotes starter Karel Vejmelka who gave up goals on each of the two shots he faced. Scott Wedgewood, who was just claimed off waivers by the Coyotes on Nov. 4, replaced him and made 27 saves to give Arizona a chance to come back.

“I don’t know. We got two quick goals and I don’t think we played real well after that,” Gourde said. “We weren’t managing the puck really well, weren’t playing fast, weren’t playing with our identity.”

Perhaps a harbinger of the way the night was going to end up came after the two early Kraken goals.

Just 34 seconds after Gourde scored, Seattle’s Morgan Geekie turned the puck over in the neutral zone and Shayne Gostisbehere found Antoine Roussel who had a two-on-one breaking into the Kraken zone. Roussel scored his first of the year and the Coyotes stemmed the tide a bit.

Even then, things looked good for Seattle as Nathan Bastian answered that goal at 11:04 of the opening period with his first goal as a Kraken.

The period ended with Seattle up 3-1 and leading in unblocked shot attempts and a somewhat dominating 59.77 expected goal percentage (xGF) – meaning not only were they getting more shot attempts but higher quality shots at that. This is how the game was supposed to go considering the Coyotes had been woeful the first 10 games of the season.

But Arizona quietly began to walk the Kraken down in the second period.

After a dump in by the Coyotes, Haydn Fleury got to the puck and the Kraken defender threw a backhanded pass up the boards in an attempt to break out. Gostisbehere read it, pinched, and broke the pass up. The puck would get to Travis Boyd who had an easy one-timer to cut the lead to 3-2 at 3:12.

The Coyotes started to turn the tide while down only one goal. They matched the Kraken in shot attempts and swung the quality shots to their side with an xGF of 59.77 in the second period.

“We had some of the pieces to our game, but we didn’t have the completeness at all,” Hakstol said. “That shows in… volume of chances. We didn’t make them work hard enough to get (chances).”

With a 3-2 lead for Seattle things started frantically in the third. The Kraken were in on Wedgewood on the first shift, nearly scoring on a couple of great looks. But they didn’t go in and Arizona transitioned the other way, getting the puck behind the Seattle net.

Johan Larsson beat the Kraken defenders to the puck and flung it in front to Crouse who blasted a shot to tie the game 3-3 at the 46 second mark.

“We got a good start early in the third, had a good shift,” Gourde said. “They get a scoring chance and score, quick turnaround. We’ve got to manage the game better…we got more looks in the third, but we’ve got to be better than that. Our identity is to play 60 minutes hard and we didn’t do that.”

Gourde is right, Seattle did get more looks in the third. A lot more.

Seattle had 18 unblocked shot attempts to the Coyotes 7 and had 77 percent of the quality shot attempts. Wedgewood made 12 saves in the period to keep Arizona in it. That allowed Phil Kessel to put the home team ahead at 13:34 with a power-play goal.

The goal was set up by Gostisbehere who ended with three assists.

“We’ll look at the clips, look at the tape and come up with an answer,” Gourde said. “Overall, our battle level, they won more battles than we did.”

— Philipp Grubauer got the start Saturday and allowed five goals on 22 shots.

— Seattle was 0-for-2 on the power play and has failed on 22 straight attempts.

— Ryan Donato was hurt after falling into the boards in the first period and did not return. After the game, Hakstol said that he did not have an update on the forward.

— Saturday was multi-goal comeback night in the NHL. Arizona came back from down two and was the third team to do so, joining the Vegas Golden Knights, the Minnesota Wild, and the Detroit Red Wings.

— With Eberle and Gourde scoring for the Kraken in the first 59 seconds, Seattle became the first road team to do so since the St. Louis Blues at Anaheim on Jan. 30 of 2004.