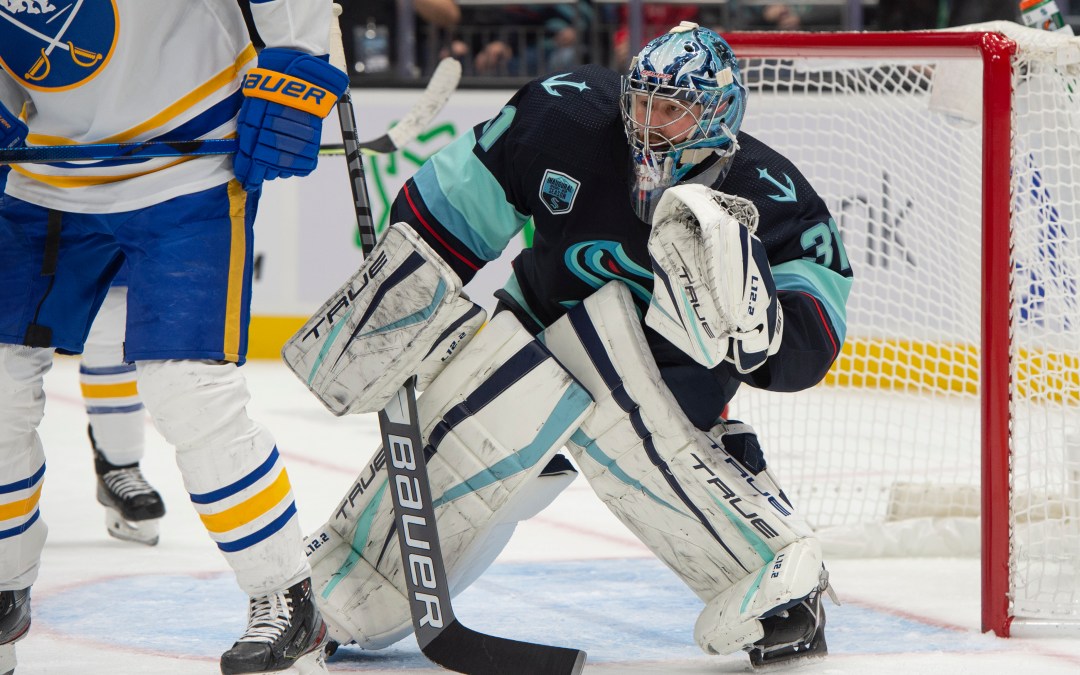 There are winnable games, and then there are games against the Arizona Coyotes, who still have a zero in the ‘W’ column after 10 games. At 0-9-1, it’s easy to look past a matchup like this, but the Kraken will need to bear down and make certain they come away with two points in the standings Saturday.

Philipp Grubauer is getting the nod in goal once again. We dig into this decision a bit more below.

Morgan Geekie was shifted to the left halfwall on the power play in Thursday’s 5-2 Kraken win over the Buffalo Sabres. Seattle still didn’t score on the man advantage that night and are now 30th in the league in this category, clicking at a miserable 8.33 percent. But Geekie’s first-period goal came just seconds after a Sabres penalty had ended, when Seattle was still clearly in power play mode.

The reason it’s notable that Geekie was on the left side is that he was already opened up and ready to fire when an Alex Wennberg pass through the seam found him in the left circle. Previously, when he was on the right side, he had to circle around the puck before he could shoot. We like this setup a lot more, as it puts one of the Kraken’s biggest cannons in a position to get the puck away with less time for the goalie to come across.

Keep a close eye on Seattle’s power play Saturday to see if it can finally break through and start improving on those dismal numbers.

By the way, Geekie brought the house down after practice on Friday. You must watch this if you haven’t already.

During preseason, we saw Jordan Eberle, Jaden Schwartz, and Jared McCann (the J’s) form impressive chemistry. As the team struggled to score in the early parts of the season, coach Dave Hakstol started mixing things up to try to find a new formula, then McCann went into Covid protocol.

On Thursday, Schwartz and Eberle were put back together halfway through the game, with Wennberg in the middle. Collectively, the group took off offensively, as Eberle potted the first hat trick in team history and Schwartz added an empty netter and assisted on two of Eberle’s goals.

It goes without saying that the trio will be back together on Saturday.

Hakstol confirmed that Grubauer will start again on Saturday for Seattle, which will bring him to 10 starts in 12 games for the team. There is some context to consider here, because Chris Driedger was out with a knee injury from Oct. 18 until earlier this week, and they’re being careful with him. Nonetheless, Hakstol has really been deploying Grubauer as a true No. 1 netminder, rather than rotating him with Driedger or—in Driedger’s absence—Daccord.

We did not expect this to be the case entering the season, especially with a guy like Driedger on the roster. After all, he stole the net away from Sergei Bobrovsky for good chunks of last season with Florida, and Bobrovsky makes $10 million a year.

We asked Hakstol this week if we might see more of a shift toward a platoon as the season progresses. “That’s not a prediction that I want to make as we go forward,” he said. “Too many things change in the short term from injuries to performance to the different segments of the schedule.

“The rhythm that we’ve had Phil in has been comfortable. We’ve had good practice time over the last two weeks here. We’ve had a pretty good rhythm in terms of rest and days off, and the games for—whether it’s Chris or in the case of the last couple weeks Joey to step in and play—will be very important. In terms of the numbers of [starts], I don’t have a prediction for you on that right now.”

So, that doesn’t sound like a shift toward more consistent rotation is coming any time soon.

It’s not how we expected things to shake out, but leaning on one guy is still very normal in the NHL. A look at netminder usage around the league confirms this.

Only the New Jersey Devils are excluded from the above graphic because none of their goalies have started more than 50 percent of their games.

After the Coyotes missed last season’s playoffs for the seventh time in eight tries, Rick Tocchet was replaced in the offseason by Andre Tourigny. Tourigny, a former NHL assistant coach, head coach of the Ottawa 67’s, and head coach of Team Canada at the World Junior Championship, certainly did not foresee the first 10 games of his tenure going this badly.

It’s also not a huge surprise, though. Arizona demonstrated that it was ready for an even deeper tank mode than before when it traded Oliver Ekman-Larsson and Conor Garland to Vancouver for the No. 9 overall pick in this past draft, plus Loui Eriksson, Jay Beagle, and Antoine Roussel.

Seriously, the Coyotes have been terrible. They rank last in the NHL in goals for with 14 and are in a league of their own there, seven goals behind the next-worst club in Dallas. Clayton Keller leads the team in goals with a whopping three, while Phil Kessel, Arizona’s other top scorer, has just one on the season.

Defensively, they aren’t much better, ranking second-to-last in goals allowed with 44. That’s three better than the 32nd-ranked team, Chicago, who fired coach Jeremy Colliton on Saturday.

A bad offense plus a bad defense do not make a winning team.

The one concern for the Kraken against the Coyotes is that they have had a hard time finishing on their many, MANY chances this season, and Karel Vejmelka—the starting goalie for Arizona—has been better than his 0-7-1 record would indicate.

Believe it or not, Vejmelka has so far turned in a very respectable .920 save percentage and 2.60 goals against average. He has only given up more than three goals one time this season, and that came against the first-place Edmonton Oilers on a two-goal night for Connor McDavid. The most crooked numbers, which have skewed Arizona’s team stats, have come on nights when Carter Hutton or Ivan Prosvetov have started.

Making things tougher for the lowly Coyotes is that they are on the second of back-to-backs after losing 3-1 Friday in Anaheim.

Marcus Johansson, Colin Blackwell, and Mason Appleton remain on injured reserve, though Johansson and Blackwell both skated with the team at practice for the first time on Friday.