Jared McCann taking advantage of opportunity with the Kraken 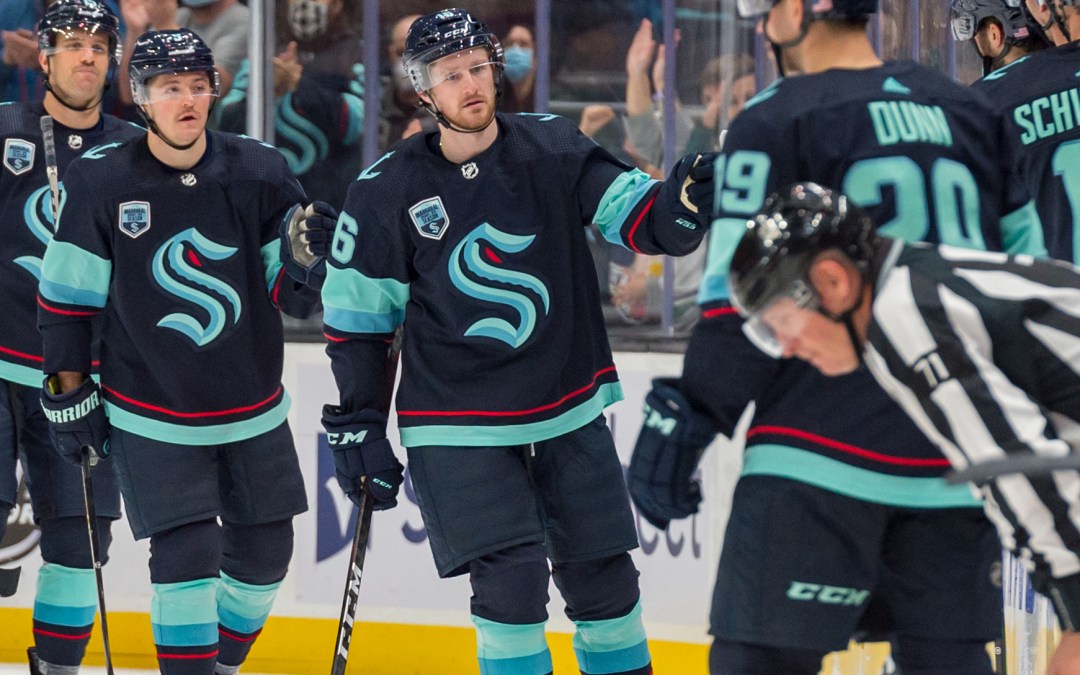 In the hours before the NHL Expansion Draft in July, a video was leaked of ESPN analyst Kevin Weekes rehearsing the reveal of Seattle’s pick from the Toronto Maple Leafs. The video was shot at Pike Place Market with a fish monger catching a fish that had a note attached to it. Weekes pulled the note from the fish to announce that the Kraken had chosen Alex Kerfoot from the Maple Leafs.

“I was like ‘what’s happening right now’ and then I saw another video of my name being called,” McCann said about the video. “I was like, ‘okay, both of us. I don’t know.’”

The video added to what had already been an anxious week for the 25-year-old forward. Previously with the Pittsburgh Penguins, he appeared to be a key player that would be left unprotected and selected in the Expansion Draft. In the hours before the Penguins had to submit their protected list to the NHL, McCann was traded to the Toronto Maple Leafs.

“That was definitely a stressful time in my life,” McCann said. “I didn’t know what was going to happen. I didn’t know where I was gonna play. But it worked out for the best and I’ve got a great opportunity here that I wouldn’t have gotten in Toronto. So, I’m very excited.”

The Penguins traded McCann because they didn’t want to lose him to the Kraken in the Expansion Draft for nothing. They avoided that by moving him in return for a prospect in Filip Hallander and a seventh-round draft pick in 2023.

Toronto wanted McCann for Expansion Draft insurance, and if Seattle selected him, they’d still have Kerfoot who is a similarly skilled player.

McCann was of interest. He was coming off his third full season with the Penguins where he scored 14 goals and 32 points in 43 games. His ultimate selection by Kraken general manager Ron Francis was not a surprise.

It all worked out for the Kraken and McCann. The team got the player they wanted all along and McCann landed in a place where he was given the opportunity he’d been waiting for.

Kraken have provided a bigger role for McCann

Playing as a center for the Penguins has its limits. McCann was not going to unseat Pittsburgh’s top two centers. Those roles belong to future Hall of Famers Sidney Crosby and Evgeni Malkin. He faced a similar log jam in Toronto with Auston Matthews and Jonathan Tavares at the top of the order.

“I’ve had [chances] sporadically over my career and I’ve done well every time I’ve been able to get the chance,” McCann said. “I’m taking it one day at a time. I know it sounds cliche, but I’m just enjoying it. I really am.”

The Kraken are enjoying it as well.

He was leading Seattle in scoring before landing in the COVID-19 protocol that forced him to miss five games. That was a setback and he dealt with the low energy and lack of taste and smell that came with the virus.

It didn’t take long for him to make an impact once cleared to play. In his first game back on Nov. 11 against the Anaheim Ducks, and while still dealing with some COVID after effects, he scored twice in a loss.

“[McCann] brings speed and a shot, you saw it tonight on a couple goals,” Jordan Eberle said after the game.

In the 10 games McCann has played with the Kraken he’s skated up and down the lineup from the top line to the third line. He’s played center, on the wing, and he’s often on the half-wall for the power play. He has scored five goals and recorded nine points.

That versatility has come in handy as Seattle has had early injuries to navigate around. No matter where he’s played, McCann has produced.

“I’ve done that my entire career,” McCann said. “I’ve always kind of been a guy who fills in a lot and it’s something that I pride myself on. I love doing that.”

While he may not be as noticeable from game to game as Brandon Tanev or Yanni Gourde, McCann is a key player as the Kraken try to break out of their early season malaise.

He’s consistently been one of the team’s top offensive performers and at his current pace he would easily top his career high in goals (14), assists (21), and points (35). If the Kraken are going to break their slump and get into the Western Conference’s playoff race, they’ll need McCann to continue taking advantage of his newfound opportunity.

His career started in Vancouver after the Canucks selected him with the 24th pick of the 2014 NHL Draft. After one year in Vancouver, he was traded to Florida where he spent three seasons before landing in Pittsburgh.

McCann is in his final year of a $2.9 million contract and will be a restricted free agent after the season. That makes it easier for the Kraken to re-sign him and the way things have started, that’s good news for both the team and player.

“The facilities have been unbelievable; our gym is like nothing you’ve ever seen before. That’s pretty crazy so we’re very fortunate to have one like this. It’s just been amazing,” McCann said of playing in Seattle. “They’ve taken care of us so well and we were able to go see the Seahawks play and we got to see a Mariners game. We have great owners and a great management here.”