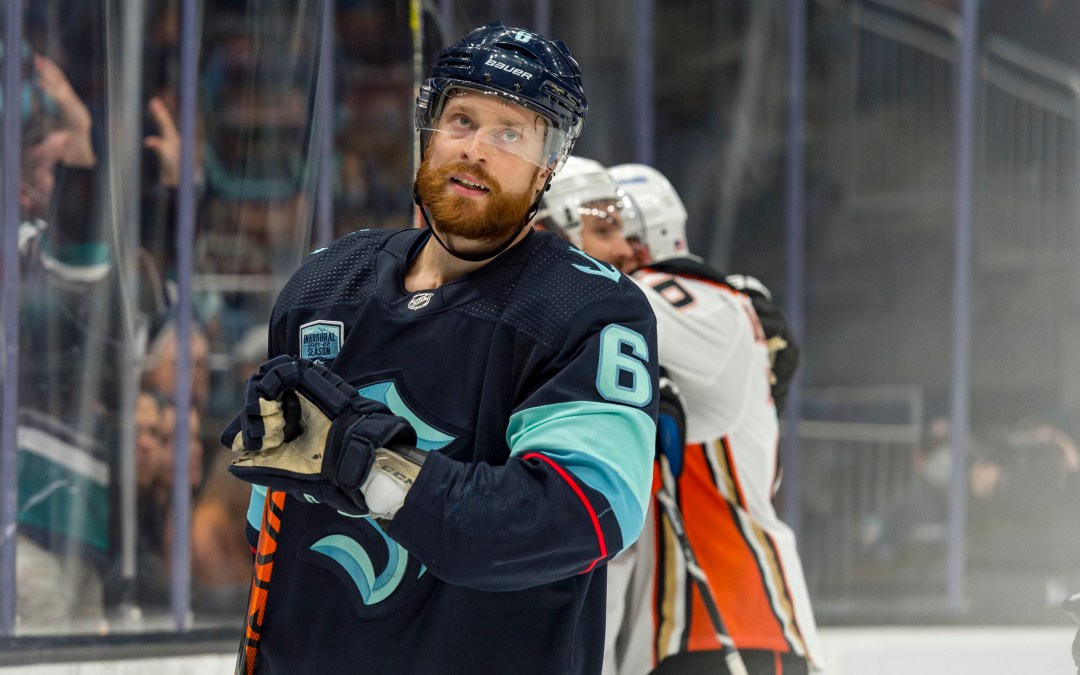 Hockey is a chaotic sport, and perhaps that’s what makes it so entertaining to watch. Every time you go to the rink, you just never know what kind of a game you’re going to see. Thursday’s 7-4 Kraken defeat at the hands of the upstart Anaheim Ducks, though disappointing in terms of the result, truly had everything you could possibly want in a hockey game. It was high scoring, high flying, high intensity, and high drama.

The disheartening result is damaging for Seattle and huge for Anaheim, which has now vaulted into second place in the Pacific Division with its sixth win in as many games. The third straight Kraken loss simply means the challenge of getting back in the race is even tougher now.

For the Kraken, the intensity didn’t switch on until the second period, and they were back to chasing the game from the jump. To their credit, they never quit and continued to battle back, even as one-goal deficits turned into two-goal deficits. Every time that happened, they picked themselves up and got back to within striking distance of a tying goal, but that equalizer proved elusive.

Every inch Seattle took it gave right back to Anaheim.

Of their several defensive breakdowns in the first period, only one was costly, as Grubauer stood tall to turn away the other 13 shots he faced.

That most glaring miscue came fewer than five minutes into the game. In transition, Carson Soucy—playing left defense—found himself just a few feet away from partner Vince Dunn on the right side of the ice. That meant Max Comtois was gliding in all alone on the weak side. From the dot, he wound and fired a shot that Grubauer stopped, but as the puck bounced around in front of the net, 18-year-old Mason McTavish found it and buried his second career NHL goal.

There was no pushback offensively, and Seattle got just four pucks on the usually impermeable John Gibson. As the Kraken went to the dressing room, it was clear they would need to bring a lot more heat to break through.

Said Jordan Eberle, “We’re finding ways to lose. Tonight was a little different. I thought we started really slow, they really took it to us and [Philipp Grubauer] really kept us in it. We were lucky to be down one after one there.”

The Kraken did break through in the second, but so too did the Ducks in a bizarre period of hockey.

It started with Jeremy Lauzon laying a high hit on Isac Lundestrom, which the Ducks did not like. Comtois went right after Lauzon, and the two tussled, both landing themselves in the penalty box. Oddly, Lauzon got an extra minor penalty on the play for his initial hit, while Comtois—who started the brouhaha—only got the one for roughing. That dustup set the tone for the strange frame.

Troy Terry used Mark Giordano as a screen to score his 10th (!!!) goal and 17th point of the season, giving Anaheim its first two-goal lead at 3:10. Terry looked dangerous every time he touched the puck, which is no surprise with the incredible hot streak he’s been on to start the season. The 24-year-old is just oozing confidence right now, and he showed it Thursday.

Jaden Schwartz answered 35 seconds later when he took a pass from Jordan Eberle off the rush and rifled it off the crossbar and in to bring the Kraken back within one.

Just when you thought the Kraken were starting to cook, Josh Mahura, off an offensive zone face-off win, blasted it through traffic. It beat Grubauer on a shot he never saw, and just like that it was again a two-goal deficit for Seattle.

The earlier issue with Lauzon was apparently not settled in the eyes of the Ducks, as Josh Manson challenged him, and the two dropped the gloves and threw a bunch of right jabs and crosses at one another, before Lauzon ultimately took Manson down to the ice.

The fight appeared to re-energize the Kraken, as Jared McCann, playing his first game since a bout with COVID, went hard to the net and a Ryan Donato pass bounced off him and through Gibson. In case you’ve lost count, the score at that point was 3-2.

The second period scoring was not quite done, though, as Kevin Shattenkirk re-established Anaheim’s two-goal lead at 15:46 on the one goal of the night that Grubauer would have wanted back. From the right dot, Shattenkirk snapped a shot that just squeezed through Grubauer’s armpit, and as soon as he realized it had gotten through, he looked skyward in disgust.

That brought the game to 4-2 to close out the second, and surely this thing was over, right?

Not so fast. The third period was every bit as wild as the second. Oh, and before we go there, just to add one bizarre cherry on top of a bizarre period, Gibson got in the grill of Brandon Tanev behind the play and held onto his stick for a good ten seconds. The referees stood and waited for them to sort it out, even though Gibson was visibly preventing Tanev from skating away.

It was all very strange.

Eberle continued his hot streak 3:57 into the final frame. On a two-on-one rush, Alex Wennberg sauced a perfect pass onto Eberle’s tape. As Gibson sprawled to cover the yawning cage, a confident Eberle buried it, putting Seattle back in business. That’s the sixth goal in four games for Eberle and his eighth in Seattle’s last eight.

Six minutes later, Hampus Lindholm pinballed one through traffic, making it 5-3. NOW it was over, right? Still no.

Exactly one minute elapsed before McCann took a pass from Donato while streaking into the offensive zone. He made a hard and deft cut to the middle, and in one fell swoop let go a howitzer that pinged off the right post and in to cut the deficit to one yet again.

The Kraken continued to push, and the line of Eberle, Schwartz, and Wennberg just missed on several prime scoring chances in the closing minutes. But an ill-timed goalie pull, just as that line was changing, gave Sam Carrick an easy empty netter and put the nail in the coffin.

Just to rub a little salt in the wound, Terry added another empty netter for his 11th (!!!) of the season and brought the final score to 7-4.

Frustrating loss against a good team

This latest loss was frustrating for players and fans alike on a lot of levels. The start was not good, but Grubauer bailed the team out in the first period and gave Seattle a chance going into the second.

Then as the game went on, the Kraken would gain ground but give it right back like they were engaged in trench warfare. That simply can’t continue to happen. For all the resiliency that this team has demonstrated, it rarely seems to get over the hump when it’s trying to mount a comeback. Giving back goals after working so hard to score just kills Seattle’s momentum, and it’s the latest troubling trend for this group.

As the standings climb gets more and more daunting, nights like Thursday are a stark reminder that the Pacific Division is better than it has been in recent years. The Ducks used to be viewed as easy points, but not anymore. Their long-standing youth movement is finally bearing fruit. They have evolved into a talented, fast, and exciting hockey club, with more young, impactful players still on the way.

The Kraken truly can’t afford to take more time to figure out ways to win instead of ways to lose. The climb back into the playoff race is getting steeper by the day.

Seattle will face the Minnesota Wild Saturday in the second game of this six-game homestand.