A look at attendance across the NHL 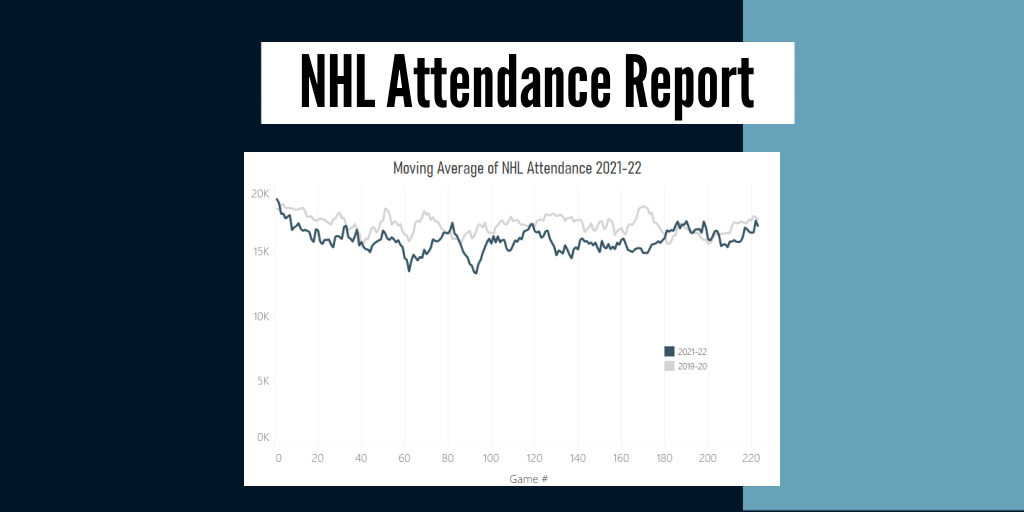 We’ve been hearing rumblings about attendance being down across the NHL, so we wanted to take an early-season look at some of the figures from around the league to see what the data actually shows. The intent is not to take shots at any team’s fanbase or paint the league in a bad spot. The numbers are the numbers and should just be used as an indicator of how the league is doing, identify any teams that are showing improvement, and other teams that could be doing better.

Last year was obviously challenging, and comparing year over year is not realistic or fair. It has been widely reported that all sports leagues and teams are facing attendance challenges in what we all hope is the tail end of the pandemic. The light is (hopefully) at the end of the tunnel, and perhaps soon the vast majority of fans will feel comfortable coming back to crowded environments like sports arenas.

Team by team change in attendance compared to 2019-20

Comparing how teams are doing compared to last season would be an easy exercise considering several arenas were not allowed to have fans in attendance as we navigated the pandemic. A fairer comparable is to see how teams are doing this season vs the beginning of the 2019-20 season. Let us take a look.

As you can tell by the amount of red on the chart, most teams’ average attendance is down this season compared to 2019-20. There is not much explaining to do here other than the pandemic continues to impact the in-person attendance of events.

Here is a look at how teams are trending by game number of the season compared to the same game number from 2019-20.

Here are a couple notes on individual teams’ attendance performances:

There is no sugar coating it, the NHL attendance numbers do not look great, but it is too early to identify if there are any long-term trends to any one team here. As vaccination rates increase and COVID case counts decline, the numbers should start to trend back up to where they were pre-pandemic, but it might take a season to fully recover.

If you have any questions or thoughts, feel free to share them in the comments section of the article.