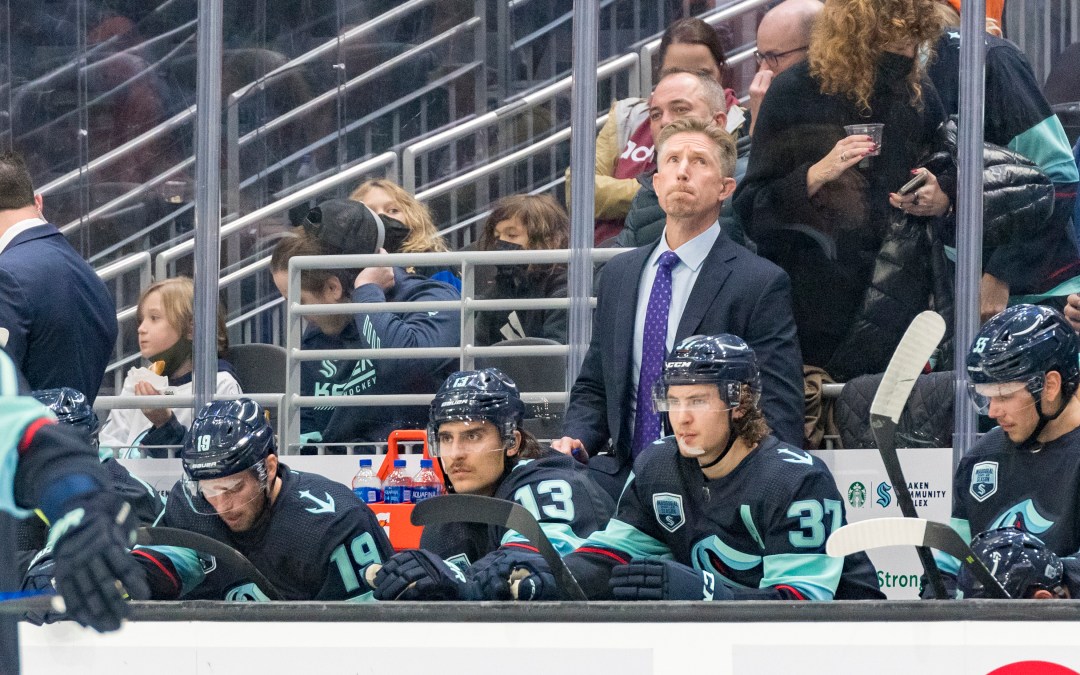 If you weren’t paying attention to what uniforms the opposition was wearing, you may have thought that Wednesday’s 4-2 Kraken loss to the Blackhawks was actually a replay of the team’s 4-2 loss to Minnesota on Saturday. It was practically a carbon copy, but this time Seattle held off on allowing the empty-net goal against until it had at least brought itself back to within one. That made things a lot more interesting in the end, but the Kraken still came up short.

The latest loss, Seattle’s fifth in a row and seventh in their last eight, again started slow. Chances were few at either end before Chicago scored late in the frame off a rush. Then the Kraken tilted the ice in the second, but somehow, as has become fairly common, gave up the only goal. In the third, they pushed back after falling behind 3-0 but couldn’t overcome the deep deficit against an outstanding Marc-Andre Fleury.

Does any of that sound familiar?

Off the rush, Patrick Kane carried the puck down the right wall. He stalled to allow the play to develop, then put a perfect pass through the seam to Alex DeBrincat on the opposite wall. DeBrincat appeared poised to one-time a shot on Philipp Grubauer, but instead he found a streaking Seth Jones right on the doorstep. Jones had Grubauer dead to rights and buried the puck in the open net.

It was a beautiful passing play—the kind that only a player of Kane’s ilk can start—that put the Blackhawks ahead 1-0 at 15:03.

Also similar to the first period for the Kraken on Saturday, there was not much of an attack against Fleury in the opening 20 on Wednesday. He faced just three shots and was only tested once.

The second period also had similarities to past home performances by the Kraken, as they dominated possession with the long change. But as we have seen on several occasions before, they failed to capitalize on their copious opportunities.

Instead, DeBrincat scored the only goal at 2:01. He took a pass at the Chicago blue line from Kirby Dach, who was behind the goal line. DeBrincat raced through the neutral zone and outskated the much larger Jamie Oleksiak to create a partial breakaway for himself. DeBrincat got a shot away and beat Grubauer on the glove side.

Calle Jarnkrok and Jeremy Lauzon had the best chances of the period for Seattle. Jarnkrok had a puck bounce his way at the doorstep, and with the net open, couldn’t put it in before Connor Murphy somehow pinned it against the post and then kicked it out of harm’s way. Lauzon took a shot from the point through traffic that beat Fleury, but it struck iron.

Another late push comes up short

Early in the third, Brandon Tanev took a hard fall when Jake McCabe took his feet out from under him in the Kraken zone. Fans didn’t like the non-call, and adding insult to (near) injury, Vince Dunn got called for roughing just a couple minutes later.

On the penalty kill, Yanni Gourde made an outstanding play to win a puck in the neutral zone. He then created a short-handed chance, got whacked by Jones and challenged to a fight by DeBrincat. The two dropped the gloves and each landed a few good shots. All the while, Gourde had a huge smile, even when he was getting punched in the face.

After the game, he deadpanned, “Yeah, I like that stuff. It’s part of the game… Good for him, he gets a Gordie Howe hat trick.”

The third period also meant more possession for the Kraken, who ended the night with a 33-19 advantage in shots on goal and 61% of the attempted shots at five-on-five. Still, the Kraken couldn’t get it to go for most of the period against a version of Fleury that looked an awful lot like the version that won the Vezina Trophy in 2020-21.

Fleury said he really enjoys playing in buildings where he gets booed and fans give him the middle finger. That’s not the first time that opposing players have referenced finding motivation from Kraken fans flipping them the bird, so perhaps the Seattle faithful should consider classing it up a bit. But we digress, and we hope you realize we are just kidding here.

It was Kane who struck next, taking advantage of a pretty bad defensive breakdown by Seattle. Philipp Kurashev skated the puck into the face-off circle to Grubauer’s right. He was covered by Adam Larsson, but Dunn, who was playing his strong side for the first time this season, oddly also chased Kurashev, as did a backchecking Jaden Schwartz. With three players all going after the puck carrier, Kane was left all alone on the weak side.

That’s the wrong guy to leave by himself. Kane had plenty of time to pick his spot on Grubauer and put it off the cross bar and in.

The Kane goal came at 5:36, and the rest of the way, it was all Seattle. But as was the case against the Wild, the Kraken pushback was too little, too late.

Jared McCann, who expressed his general frustration with the way things have been going after the contest, was the player who finally got one behind Fleury. With Seattle on a power play following a Dach slashing penalty, Schwartz slid a puck across the goalmouth. Fleury was down against the post to his left, and McCann found the puck bouncing around and snapped it into a mostly open cage.

Saturday, Grubauer was summoned to the bench for an extra skater with 5:22 left, and Minnesota scored seconds later. On Wednesday, Hakstol held off on calling him until there was 3:39 on the clock, and this time the timing strategy almost paid off. Gourde scored on a rocket one-timer off a pass from Dunn to bring Seattle within one, but then with the Kraken pushing for the equalizer, McCabe flipped a puck from his own zone about 170 feet that found its way in. That sealed a 4-2 victory for Chicago, the Blackhawks’ fourth consecutive win since head coach Jeremy Colliton was fired on Nov. 6.

Things only get tougher from here

When you’re on a losing streak like the Kraken are on, the last thing you want to see is a murderer’s row of upcoming opponents. But that’s what Seattle gets next, as they take on Colorado, Washington, Carolina, Tampa Bay, and Florida.