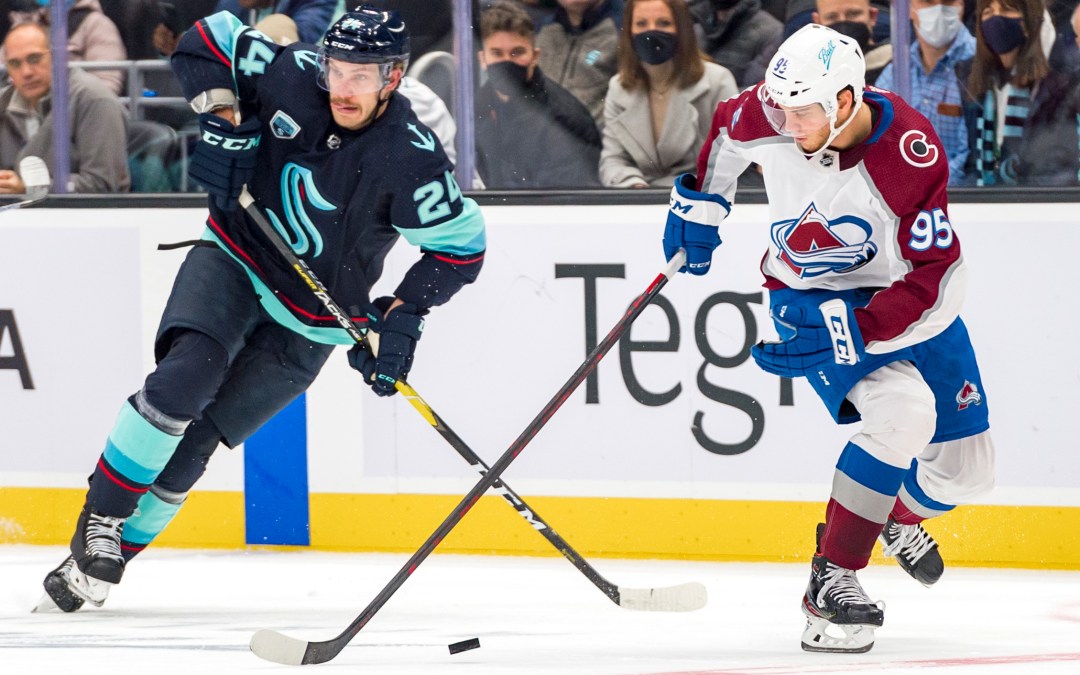 Saturday marked the first time that the Seattle Kraken have been completely run over by an opposing team on their home ice, as the Colorado Avalanche steamrolled their way to a 7-3 victory at Climate Pledge Arena. Despite having Nathan MacKinnon out since Nov. 6, the Avs have found their high-octane game and have now scored 24 goals in their last four contests. That’s six goals per game for those of you counting at home.

On the flip side of that coin, the Kraken have lost their way. No longer the aggressive forechecking squad that we saw at earlier stages of the season, Seattle is playing like it’s afraid to make mistakes. Kraken players seem well aware that every time they screw something up, the puck finds its way into the back of their net.

To sum Saturday up nicely, the Kraken made two mistakes in the first seven minutes, and they were down 2-0. Later in the opening period, Jaden Schwartz caught a stretch pass after a blocked Colorado shot and went in alone with all the time in the world. He beat Darcy Kuemper and… rang it hard off the post.

That was the way it went. That’s the way it has been going. Every mistake is a goal against, and every opportunity seems to just miss.

The latest loss extends Seattle’s streak to six games, and it has now dropped eight of its last nine dating back to the loss to the Rangers on Oct. 31.

Here’s what we’re taking away from this painful game.

Believe it or not, the Kraken played a better first period against the Avalanche than they did against Chicago or Minnesota in the two games prior. But Yanni Gourde tried to clear a rebound on an early penalty kill, and instead of getting it out of harm’s way, swept it across the front of the net and right onto the stick of Andre Burakovsky. That was at 4:04 of the opening frame, and already the Kraken were chasing, as they have done so many times this season. Then two minutes later, with Seattle on the man advantage, a bad pinch in the offensive zone sent Valeri Nichushkin in alone.

“The short-handed goal has a way of— that can take the wind out of your sails, for sure,” said coach Dave Hakstol.

Did it ever. By 5:33 of the second Cale Makar had scored his first of two goals, Burakovsky had scored his second of two, Chris Driedger was replaced by Philipp Grubauer, and the wheels were completely off the Kraken’s wagon.

When the horn sounded to end the second period, the Kraken had given up four goals in one frame and trailed 6-0.

As Mark Giordano said after the game, “It went from bad to really bad in a hurry.”

Takeaway #2: Have the Kraken hit rock bottom, or not yet?

We had a conversation with a fellow media member during the first intermission, when Seattle was down 2-0. It went a little something like this…

Us: “Losing streaks always have a rock-bottom point, and it doesn’t feel like the Kraken have gotten there yet. They haven’t had that game where they get spanked 6-0, you know?”

Fellow media member: “Well, it could be tonight.”

Fast forward 20 minutes of game play, and the Kraken were getting spanked 6-0. Now, the final score prediction wasn’t quite spot-on, but… you get the picture.

We are firm believers in Harvey Dent’s theory that the night is darkest just before the dawn. With more daunting opponents on the horizon, though, and with the Kraken playing downright bad hockey these days, it’s quite possible that we have not yet hit the darkest phase of this losing streak.

Heck, even on a night when Seattle never had a chance, positives could still be found in a third period in which the team found three goals. The players still sound relatively positive, and the resiliency and effort are still there. We hope we’re wrong, but it still feels like this streak is going to get worse before it gets better.

The night is darkest just before the dawn, and we do believe the dawn is coming. But how soon will it come?

Six minutes into the third, Jordan Eberle scored his ninth goal of the season, a power play rebound off a Vince Dunn shot, that extended his point streak to seven games.

The fans at Climate Pledge Arena erupted as if the Kraken had just scored the go-ahead goal, when in reality it was 7-1. When the Kraken scored the next two—Brandon Tanev added another power play goal at 8:30 and Colin Blackwell got his first as a Kraken at 15:12—you would have thought from listening to the crowd that Seattle was on the brink of leveling it.

We asked Giordano if the players noticed the fan reaction in the third. Here’s what he said:

“Absolutely. It was pretty cool to see our fans at the end of the game stay and cheer us off the ice. We’re obviously not happy with that effort in the second, but we made sure that we weren’t going to lose the third period there. We went in there with making a commitment to each other that we were going to play the right way, and it’s pretty cool that they stayed and cheered for us. It says a lot about the fans in this building for sure.”

Unsolicited, Hakstol also referenced the fans when asked about positives in the third.

“It’s good to see the power play go and execute. The biggest part of that is it gave our fans an opportunity to enjoy the third period. That’s pretty special when they’re still into it as much as they were in the third period. I think our players can be proud of showing that effort in a difficult spot.”

For as much negativity as we tend to see on social media (and we see a lot of it these days), the building was rocking just as much Saturday as it has been every game this season. These fans love their boys, and they showed on Saturday that they’re here to ride this out through thick and thin.