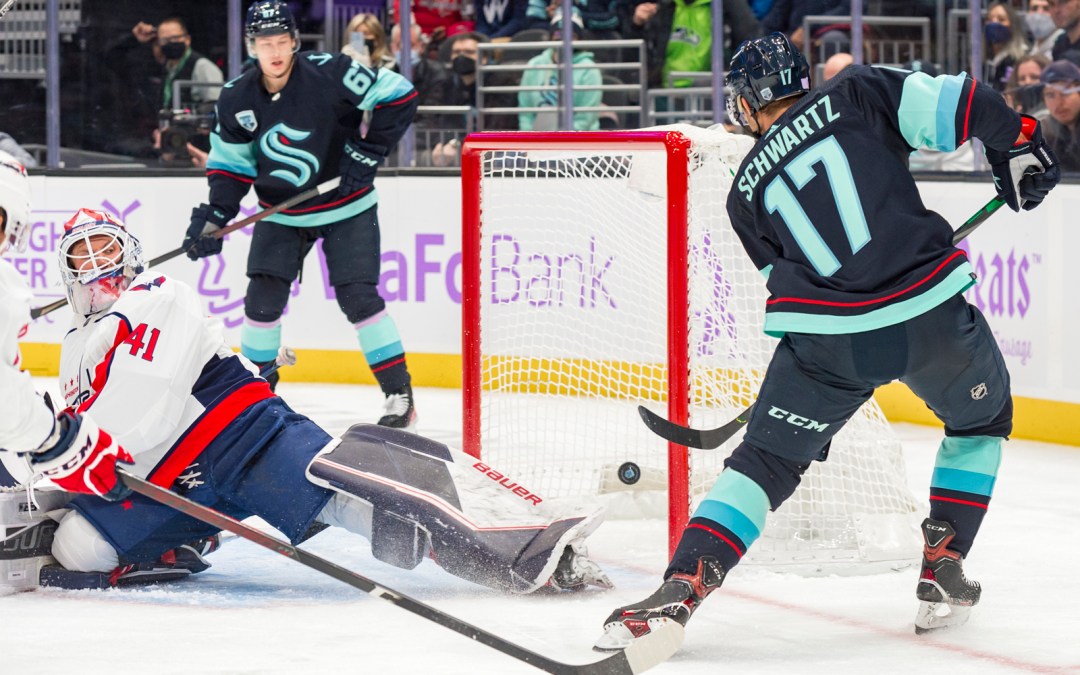 Nobody said it would be easy for the Seattle Kraken to snap its miserable six-game skid, especially against a top-flight team like the Washington Capitals. And it certainly was not easy, but snap it they did on Sunday, as Philipp Grubauer was the guy that everyone expected him to be when he was splashily signed as a free agent in the offseason.

Kraken captain Mark Giordano had been saying for about a week that the group would have to “grind out” a victory to get off this losing streak. Meanwhile, we’ve been saying that Grubauer would have to steal a win for his team, something to help the guys build some belief that not every mistake has to end up in Seattle’s net.

Both happened on Sunday. Grubauer bailed his team out on countless occasions, and the players in front of him returned the favor by selling out to block shot after painful shot in the third period.

The result was a desperately needed 5-2 Kraken win over the Capitals and some good feelings for Seattle for the first time since Nov. 4. Here are our takeaways.

Takeaway #1: Kraken get the bail-out save(s) they’ve so sorely needed

When Jeremy Lauzon coughed up the puck to Evgeny Kuznetsov behind the Kraken net, and Tom Wilson buried Kuznetsov’s pass just 3:34 into the game, there was a palpable sense of, Welp… here we go again, throughout Climate Pledge Arena.

When Morgan Geekie coughed it up to Connor McMichael at the offensive blue line six minutes later, and McMichael skated in unmolested toward Philipp Grubauer, fans in attendance prepared themselves to have the air completely sucked out of the building.

But that didn’t happen. For the first time in… well, we don’t really know how long… the Kraken got the save that bailed them out after a bad mistake. Grubauer dropped into the butterfly and kicked away McMichael’s shot.

“We make a mistake, and all of a sudden— it’s not quite a clear-cut breakaway, but it’s a heck of a save at the right time,” said coach Dave Hakstol after the game. “That’s important. So Grubi gets us through that first period, and we feel good coming out of that period. A lot of it has to do with that save, and then the work he did on the PK to finish out the period.”

Saves like the one on McMichael have been few and far between for the Kraken and are so important for the team’s confidence that the goalie has its back if it screws something up. From that save on McMichael onward, the Kraken morphed back into the team they aspire to be, relentless on the forecheck and willing to simply outwork an elite team.

Grubauer had been showing signs of improvement recently, but he took an enormous step on Sunday, turning away 37 of the 39 shots he faced and rescuing his team from Alex Ovechkin and his band of offensive stars.

After the Kraken lost 7-3 to Colorado on Friday in a mostly lifeless (except for the third period) effort, it was not a surprise to see Hakstol shuffle up his lines again for Sunday’s game against the Capitals. What was a bit surprising was his decision to split Schwartz up from the red-hot Jordan Eberle, with whom Schwartz had formed obvious chemistry.

In the shakeup, Schwartz was moved to a line with Yanni Gourde and Calle Jarnkrok. We surmised via the Twitter machine that the shift may have actually been an effort to get Jarnkrok going offensively, as he had not registered a single point in his 12 games this season. Jarnkrok got the second assist on Adam Larsson’s first goal as a Kraken, and from then on looked like a completely different player. He was flying around the ice, and deservedly scored a beautiful goal seven minutes later.

Schwartz stole a puck at Seattle’s blue line and sped through the neutral zone with Jarnkrok on his flank. He dished to Jarnkrok, who delayed, cut to the middle, and rifled it into the top corner.

And so… Jarnkrok is going. “It felt good,” he said of contributing offensively to an important win. “It took a little longer than I wanted it to, but it was a great team win.”

On the new look to the forward lines, Hakstol said, “Part of the thought process, [Johansson] and [Wennberg] playing together have some pretty good chemistry, and we have [Eberle] on that line, so you’ve got a guy on that line that can finish as well. With [Schwartz] going with [Jarnkrok] and Yanni [Gourde], those two guys play a certain way, and we felt Schwartzy with them would add to what that group does on the offensive side. And they’re going to defend well, they’re going to play hard and tenacious without the puck.”

Schwartz didn’t miss a beat without Eberle, scoring a goal and three assists on the night and rudely stealing first-star honors away from Grubauer.

Eberle saw his point streak end at seven games, but halting the losing streak at six games was clearly more important. Though he missed the scoresheet, Eberle still looked dangerous every time he touched the puck, especially in the second period.

We’ll go out on a limb and guess that assuming no injuries, these lines will stick for Wednesday’s game against Carolina.

Takeaway #3: Kraken reward fans for sticking with them

In the last “Three Takeaways,” we wrote about the response of the fans in the third period on Friday. When Seattle scored its first goal to make it 7-1, Climate Pledge Arena erupted as if it was the biggest goal the team had ever scored.

There was an underlying theme to Sunday’s post-game media availability that the gutsy 5-2 Kraken win over the Capitals—a game in which players were throwing themselves in front of every slapshot, and Grubauer was standing on his head—was for the fans.

Grubauer joked that he’s played in places where the crowd will “throw beer cans at you” for performances like Friday against the Avs, so the guys wanted to repay Kraken fans for their support against the Capitals on Sunday.

“Coming out of two nights ago, that hockey game… that stings,” added Hakstol. “That stings and that stays with you. The atmosphere in our building also stays with you. There’s probably a little bit of that mindset of how much support we had two nights ago on a really crappy night. And then to be able to come out tonight and do what we could to try to reward the people up there, and most importantly really take pride in our standard tonight, and that’s what happened.”

Now it’s up to Seattle to build off of this win. Ending a losing streak is one thing, but finding wins consistently in the NHL is a whole other ball of Jarn…krok.

We’ll show ourselves out.