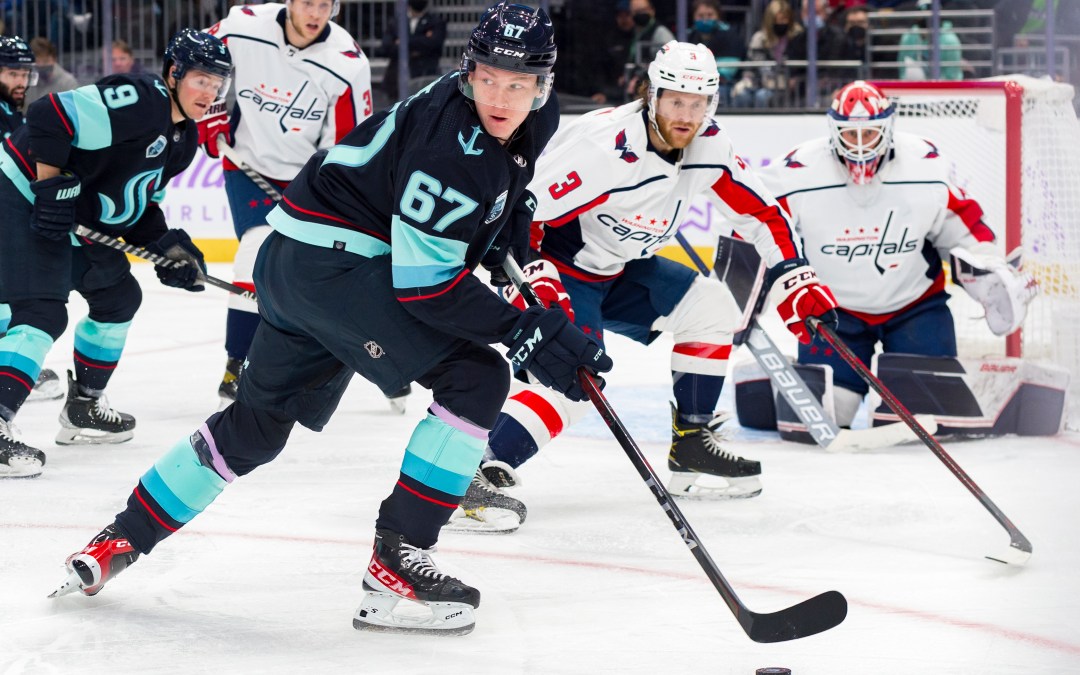 SEATTLE – Kraken forward Mason Appleton was back skating with his teammates Tuesday at the Kraken Community Iceplex and was a full participant. He took regular reps playing on the wing with Jared McCann at center and Brandon Tanev on the other wing.

It looks like he’s close to returning, but head coach Dave Hakstol wouldn’t budge on any insight. “He’s close, he’s day to day right now,” Hakstol said. “It was nice to get him in practice, first full practice on a line so that’s another nice step for him.”

Once Appleton is able to return the Kraken will have a tough choice to make with their roster. A player will have to go to make room for Appleton. Nathan Bastian practiced Tuesday but did not participate in line rushes. He would be the 13th forward, and it seems unlikely he would go as that would leave the club thin up front.

On the back end, Will Borgen and Haydn Fleury would be in the crosshairs with an Appleton return. Both players would need to clear waivers and would be likely candidates to get claimed. With Appleton close, a roster move is imminent.

Revenge game with the Carolina Hurricanes

There is a lot of cross over between the Carolina Hurricanes and the Kraken. It starts with former Carolina player, coach, and general manager Ron Francis, who now of course runs the Kraken. But, the connections go deeper.

Television broadcaster John Forslund, head scout Robert Kron, Fleury, and Morgan Geekie all have ties to the Hurricanes, who just happen to be in Seattle for a game Wednesday night at Climate Pledge Arena.

Geekie was a third-round draft pick of Francis and the Hurricanes in 2017 and played parts of the last two years with Carolina. Francis nabbed Geekie again in July’s NHL Expansion Draft.

“Obviously, they had other plans and I wasn’t a part of them,” Geekie said. “But it’s a business and there’s no hard feelings. Everyone’s got their plan. Obviously, they’re having success and doing things well, but I’m excited for the opportunity to kind of get back at them a little bit.”

Fleury was a first-round pick of Carolina’s in 2014 and spent four seasons with the Hurricanes before being traded to the Anaheim Ducks at last year’s trade deadline. Seattle took him in the Expansion Draft.

With the Kraken, Fleury has yet to take a foothold as a regular player in the defensive rotation. He’s been a healthy scratch in all but three games in November. While he’s looking forward to seeing his old teammates Tuesday, it’s not clear if he’ll be in the lineup.

Johansson played with the Kraken on opening night but then was injured and missed time. He returned to the Seattle lineup on Nov. 9 in Vegas and immediately had an impact with the club’s struggling power play.

Johansson helped snap an 0-for-23 power-play drought with an assist and since then the Kraken have been on fire with the man advantage.

With Johansson often parked in front of the net, Seattle’s power play is 5-for-10 over the last four games.

“He has veteran presence and he’s positive but in a pretty stern way,” Hakstol said of Johansson. “He brings that leadership, he’s outstanding getting us in the zone. He’s been in that spot that he’s in right now for us for a lot of years, and he’s seen a lot of different things there.

“So, he brings a nice level of execution and that’s been a part of it, for sure. It was good timing to have him come back into our group as our group was starting to get that swagger.”

Kraken with a tough test with Carolina on Wednesday

If it feels like every night, the Kraken are playing a top opponent these days, it’s because they are.

Carolina is coming off an overtime loss on Monday in San Jose, but they enter Wednesday’s game at Climate Pledge Arena with a 14-2-1 record and are tied with the Florida Panthers for the league lead in standings points with 29. Oh, by the way, Seattle plays at Florida on Saturday.

The Hurricanes have only allowed 34 goals, which makes them the league’s stingiest team.

“All that sounds close to the team we played two nights ago,” Hakstol said. “Not giving up very much and great goaltending. So, we have to go out and play a full 60-minute game, have a real good 60-minute effort, and have some extra effort in certain areas. But ultimately, just to have everybody go out and do the things that they do well for our team and bring that consistent level of play throughout the 60 minutes.”