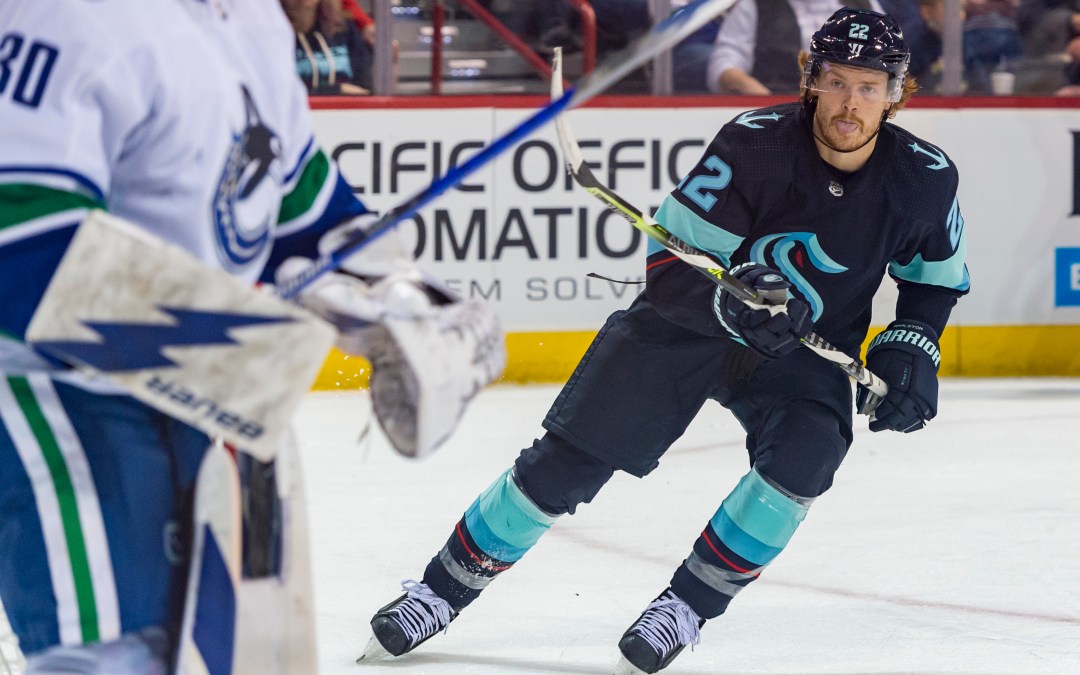 It’s wild how different things suddenly feel for the Kraken after just one win. It’s not that the attitudes of the players or the head coach had publicly changed all that much during Seattle’s six-game losing streak that was snapped with an impressive victory over the Washington Capitals Sunday. It’s just that… things… feel different. We can’t really put our finger on it, but watching the team skate on Wednesday morning, you just get this sense that the Kraken can play with the Carolina Hurricanes, one of the NHL’s best teams.

For the first time all season, the Kraken are fully healthy entering Wednesday’s game (knock on wood!). There are no players in COVID protocol and no players on injured reserve. That’s because Mason Appleton—who suffered a scary ankle injury against the Montreal Canadiens on Oct. 26—was activated on Wednesday morning and is expected to play.

It was a tough month for Appleton. “Rehab sucks, just because you want to be on the ice, and you’re not,” he said Wednesday after morning skate. He indicated there were times where he had to crawl up his stairs like his dog.

On returning, he said, “You’re just playing hockey. Trust your body and trust your brain and just make hockey plays. That’s kind of all there is to it.” Sounds easy enough, although Appleton has been out for four weeks, so there will likely be a bit of a ramping up period for him. He’ll start out on a line with Brandon Tanev and Jared McCann, which should create a nice mix of skill and tenacity.

Coach Dave Hakstol talked Wednesday about the luxury of having his whole group together. “There’s a little bit more flexibility in terms of some of the combinations,” he said. “Having everybody available is a positive, but as in every night—just like the other night—20 guys are in the lineup, 20 guys are ready to go, and 20 guys have to be ready to go for 60 full minutes.”

In the past week, it became abundantly clear that Appleton was closing in on a return. It also became apparent that another roster move would be coming to make space for him. That roster move happened Wednesday morning, as Nathan Bastian was placed on waivers. Bastian—like Riley Sheahan before him—had been a good soldier and a solid presence on the fourth line for much of the season. But he had been a healthy scratch since Colin Blackwell returned on Nov. 13, making him a clear candidate to be sent down.

The hope for Seattle is that Bastian, who is just 23 years old and has a year left on his contract before becoming a restricted free agent, will clear waivers and go to the AHL’s Charlotte Checkers. It is certainly feasible that another team claims him, though.

This means Will Borgen, who has not dressed in a game for the Kraken, again survives to stay with the NHL club. The Kraken clearly believe the young, right-shot defenseman is likely to be picked up if they try to pass him through waivers.

By the way, with Bastian gone, it appeared from line rushes on Wednesday that Ryan Donato will be the healthy scratch from the forward corps, joining Haydn Fleury and Borgen.

What the Kraken face in the Carolina Hurricanes

We’ve had this game against the Hurricanes circled on the Kraken schedule for quite some time. Beyond the obvious ties between the two franchises—general manager Ron Francis, director of amateur scouting Robert Kron, play-by-play announcer John Forslund, Morgan Geekie, and Fleury all have experience with Carolina—this is just a good, good hockey team and a Stanley Cup contender. In fact, the Canes currently hold the NHL’s best record at 14-2-1.

The team’s lone overtime loss of the season did come Monday against the Sharks, and they are on the end of a five-game road trip through most of the Pacific Division. So perhaps Seattle can take advantage of a relatively tired team, as it did against Washington on Sunday.

The Hurricanes are getting it done at both ends of the ice. Offensively, they’re a top-ten team, scoring 3.35 goals per game, while they simultaneously boast one of the stingiest defenses, allowing just two goals against per game.

The knock on this team in past years has often been its goaltending. It was a bit surprising to see Alex Nedeljkovic sent to Detroit in the offseason, as he appeared to be solidifying the position. But general manager Don Waddell replaced Nedeljkovic and Petr Mrazek with Frederik Andersen and Antti Raanta, moves that have paid early dividends.

Andersen has been outstanding with a 1.89 goals against average and .937 save percentage and leads the league with 11 wins.

Sebastian Aho and Andrei Svechnikov drive the bus for the Canes offensively and have posted 18 and 19 points on the season respectively. Former Portland Winterhawk and friend of the Sound Of Hockey Podcast, Seth Jarvis, played his 10th game of the season on Monday. That means he crossed the threshold of burning the first year of his entry-level contract, so he will not be returned to the WHL. The 19-year-old has four goals and two assists.