Could injury issues be subsiding for Kraken against Penguins? 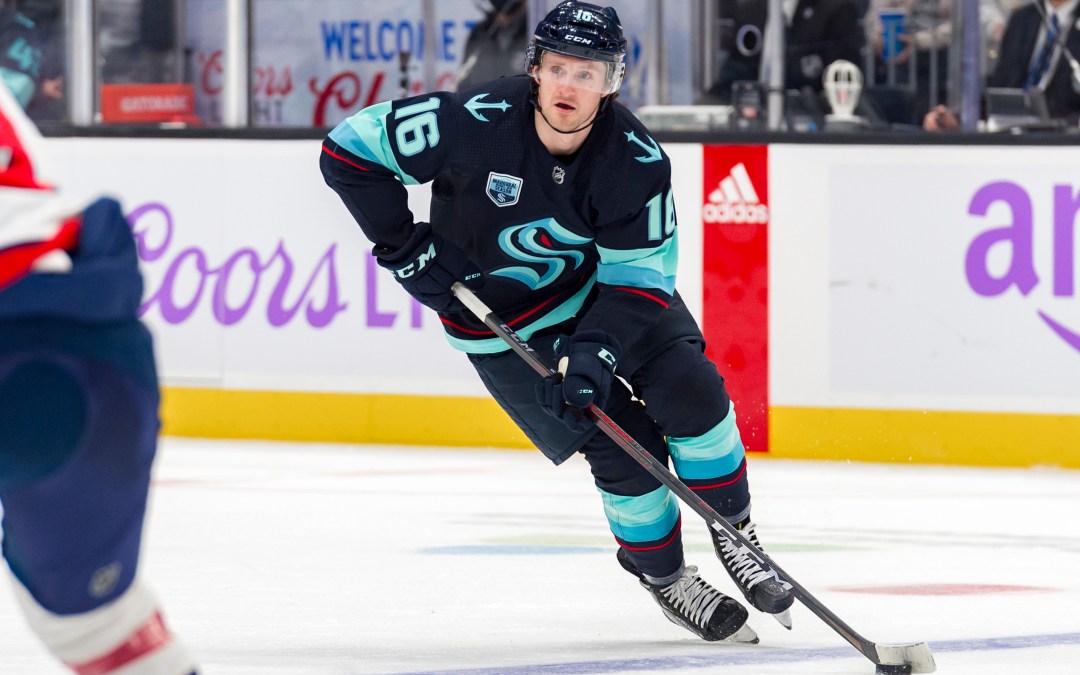 The Kraken have been rolling lately, earning points in six of their last seven games and posting a 5-1-1 record in that stretch since snapping their six-game losing streak. Perhaps the most impressive win of this run of success came on Friday at home against Connor McDavid, Leon Draisaitl, and the Edmonton Oilers on a night when Seattle did just about everything right, despite having several key players out. On Monday, the Kraken welcome yet another elite foe to Climate Pledge Arena, as they take on Sidney Crosby and the Pittsburgh Penguins.

Seattle has had several players out of the lineup these last couple games, including top scorers Jaden Schwartz and Jordan Eberle, two-way forward Calle Jarnkrok, captain Mark Giordano, and goalie Chris Driedger. Schwartz, Eberle, and Jarnkrok all practiced with the team on Sunday. Eberle was a full participant and skated on a regular line, while Schwartz and Jarnkrok took rushes on a line with likely scratch Kole Lind. That pair then stayed on the ice but did not take part in drills that were likely to lead to contact.

From our vantage point, it appeared that Eberle was ready to go, while Schwartz and Jarnkrok needed more time. However, all three skated on regular lines at morning skate Monday, and coach Dave Hakstol called all three “game-time decisions.”

As of the writing of this story, Jarnkrok is still officially listed on injured reserve on the NHL Media site, and Lind is still on the active roster, meaning he has not been assigned back to Charlotte. We think Lind will go back once all the other players are ready, so him still being around could be telling. UPDATE: Schwartz and Eberle took part in warm-ups. Jarnkrok did not and is still listed on injure reserve, according to the NHL Media website.

While the “next man up” mentality has worked to perfection, getting any of those players back would be a huge boost to the club and would make the Kraken lineup deeper than it has been over the past week.

Oh, in case you’ve been wondering, Giordano was still in Covid protocol as of Sunday. Hakstol confirmed that he was still in Florida, as he hadn’t yet been allowed to travel back to Seattle.

Two central characters for the Kraken—Jared McCann and Brandon Tanev—spent last season with the Pittsburgh Penguins. Both have been significant contributors for Seattle in the first two months of the season, with Tanev growing into a cult hero around the Pacific Northwest and McCann already approaching his career high in goals.

With McCann destined to be exposed by the Penguins, he was traded to Toronto in the days before the Expansion Draft for Filip Hallander and a seventh-round pick. Seattle snagged McCann from the Maple Leafs and Tanev from Pittsburgh, so in a way, the Penguins lost two current players as opposed to one. They got a bit of compensation, but if the return for McCann doesn’t yield anything down the road, then they may have galaxy brained that one.

Eberle was asked Sunday if the “revenge game” scenario is something the players talk about, and he confirmed that it is, adding that seeing success against one’s old team—like Adam Larsson had against Edmonton on Friday—also builds camaraderie in the locker room.

McCann was then asked more specifically about the Penguins, and he said, “They didn’t want me. That’s the way I look at it.” He later added that he does not harbor any hard feelings toward the organization and understands that it’s a business, but still, those are some strong words.

Let’s see what kind of impact McCann and Tanev can have against their old mates on Monday.

It’s been an odd start to the season for Pittsburgh, which began without either of its superstars in Crosby or Evgeni Malkin. Sid returned from a wrist injury on Oct. 30 and has since notched three goals and eight assists in 12 games. Malkin is still rehabbing from knee surgery and was skating in a non-contact jersey on Monday morning, so he is still out.

Despite the absences, the Pens started with points in each of their first five games, but have been up and down ever since, with two three-game losing streaks and a five-game winning streak mixed in. They won 4-1 Saturday in Vancouver on a night when Crosby scored once and Jake Guentzel potted a hat trick.

Guentzel has been on fire. He has points in each of his last 12 games and has 13 goals and 11 assists on the season, pushing him just above a point-per-game pace. He leads Pittsburgh in goals and points, and was just named the NHL’s third star of the week with five tallies in three games.

Against Edmonton on Friday, the Kraken benefitted from facing third-string goalie Stuart Skinner. On Monday, Pittsburgh backup Casey DeSmith is expected to be in net, which could also be a boon for Seattle. In a small sample size, DeSmith has had a tough go so far this season, posting a 0-3-1 record with a 4.32 goals against average and .867 save percentage.

With three players considered “game-time decisions,” and Schwartz going so far as to say he’ll see how he feels in warm-ups, this is a bit of a crapshoot. However, this is how the Kraken lined up in morning skate, so this is our guess at how the Kraken will look against the Penguins. We will update this during warm-ups. UPDATE: Jarnkrok remains out. Eberle and Schwartz appear to be in, as does Will Borgen in place of Haydn Fleury.