Three Takeaways from a complete Kraken win over the Sharks 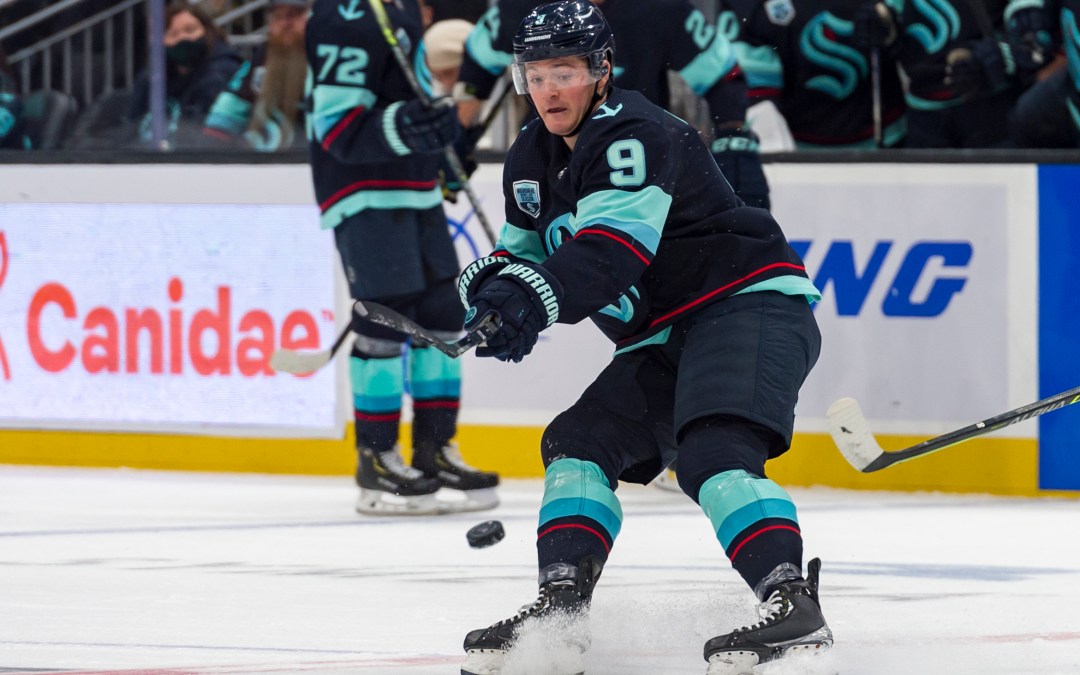 Who doesn’t love a fun, old-fashioned game of “Who blinks first?” That’s what Tuesday’s 3-1 Kraken win over the San Jose Sharks amounted to, as both teams’ goalies were playing great through two periods. It was Seattle who broke through first, and sure enough, it was Seattle that skated away with the important win over a divisional foe.

The Kraken entered the road contest with just one victory in six tries against Pacific Division teams, and as the losses have mounted this season, those within the division have been extra damaging for Seattle’s postseason hopes. Of course, there’s a massive mountain to climb if the Kraken are going to get back in the race, but taking down the Sharks on Tuesday was a good step and another good building block after a thrilling comeback ended in an overtime loss on Saturday.

Here are our Three Takeaways from an exciting 3-1 Kraken win over the Sharks.

Takeaway #1: Hockey games go by fast if there are no whistles

The first period was one of the fastest periods of professional hockey we’ve ever witnessed. Here’s how that happened. Chris Driedger made a tough save on a deflected Erik Karlsson shot and got a whistle 46 seconds into the game. Then he gloved a Lane Pederson shot at 2:51 for the second whistle. But the next stoppage didn’t come until 14:58 of the period, so a whopping 12:07 of game time elapsed between whistles.

In all, the clock stopped just six times in the first period, making for exciting hockey as the game flowed beautifully. When the dust settled on the chaotic first frame, the score was 0-0 after a good start by the Seattle netminder and perhaps an even better one by James Reimer at the other end.

The obvious play of the game came in the second period.

Driedger had just made a nice toe save, but the rebound went right to Matt Nieto on the doorstep. He collected the loose puck and pushed it around Driedger, who was down and out, for what looked like a sure goal. But out of nowhere, Adam Larsson’s stick came down at exactly the right time, and the Swedish blueliner committed…

“I mean, that’s the save the year,” Driedger said. “It’s always nice when one gets past you and your D bail you out. I think when everyone’s playing well, I can hopefully bail the guys out on a couple plays, and they bail me out a couple times.”

Driedger did rescue his mates a few times as well. Coming into this one, we were interested to see how he would perform after playing two of his best games of the year in a row against Florida and Buffalo, then going on injured reserve for the second time this season. But he picked up right where he left off and looked calm and confident.

You could tell Driedger was really tracking the puck well. When screened, goalies are trained to look around players in front of them to keep eyes on the puck. It might open up some net on the side opposite the goalie’s lean, but that’s the tradeoff to be able to see the puck.

With Seattle killing a Vince Dunn penalty in the second period, Driedger was looking around a screen to his right. When the shot came from the point, it went to the left of the body that was standing in his way. When that happens, the goalie is guaranteed to lose sight of the puck, because the path of the shot passes behind the opposing player. Driedger calmly gloved the puck down on the left side of the player, as if he saw it the whole way.

It was perhaps not the flashiest of saves or the most memorable, but saves like those show a goalie is dialed in.

There was one butt-clench moment by Driedger in the closing minutes, when Seattle’s lead had just been cut down to one. From behind the net, he tried to clear the puck himself by lifting it out of the zone, and we thought he might even be going for the empty net at the other end. He didn’t get it high enough, though, and Tomas Hertl jumped and gloved it down. Driedger dived back to his net and this time bailed himself out after the gaffe.

Asked if he was trying to score, Driedger said with a chuckle, “I mean, I think I was missing by about 10 yards. I was just trying to clear the puck. I thought I got quite a bit under it… Looking back maybe a little bit too dangerous of a play by me.”

We talked about this quite a bit over the last few weeks. We’ve determined that the winning formula for the Seattle Kraken is reliable goaltending, good defensive structure through the neutral and defensive zones, and opportunistic scoring. Seattle checked all three boxes on Tuesday, and lo and behold, got the needed win.

Yes, Driedger looked good, and yes, Larsson and Jamie Oleksiak swept pucks off the goal line to help him out. But the group as a whole kept the Sharks at tentacle’s length for most of the night.

“I can’t recall any real odd-man rushes,” Driedger said. “I thought we just locked it down really, really well. We only had one penalty kill so it was just an all-around great team effort.”

So between Driedger and solid team defense, that’s two of the three ingredients. The third ingredient came courtesy of Seattle’s third and fourth lines. The all-former-Shark line of Ryan Donato, Alexander True, and Joonas Donskoi got Seattle on the board first with a grinding effort to push the puck the length of the ice as a unit. Then Morgan Geekie made a beautiful pass off the rush—he’s made a few of those this season—to Brandon Tanev for a late insurance marker that would become needed in the end.

It was a complete team effort for the Kraken against the Sharks, the kind that we have seen on nights when Seattle has been successful this year. Now, the Kraken quickly turn their attention to the high-flying Anaheim Ducks for their second of back-to-back games on Wednesday.