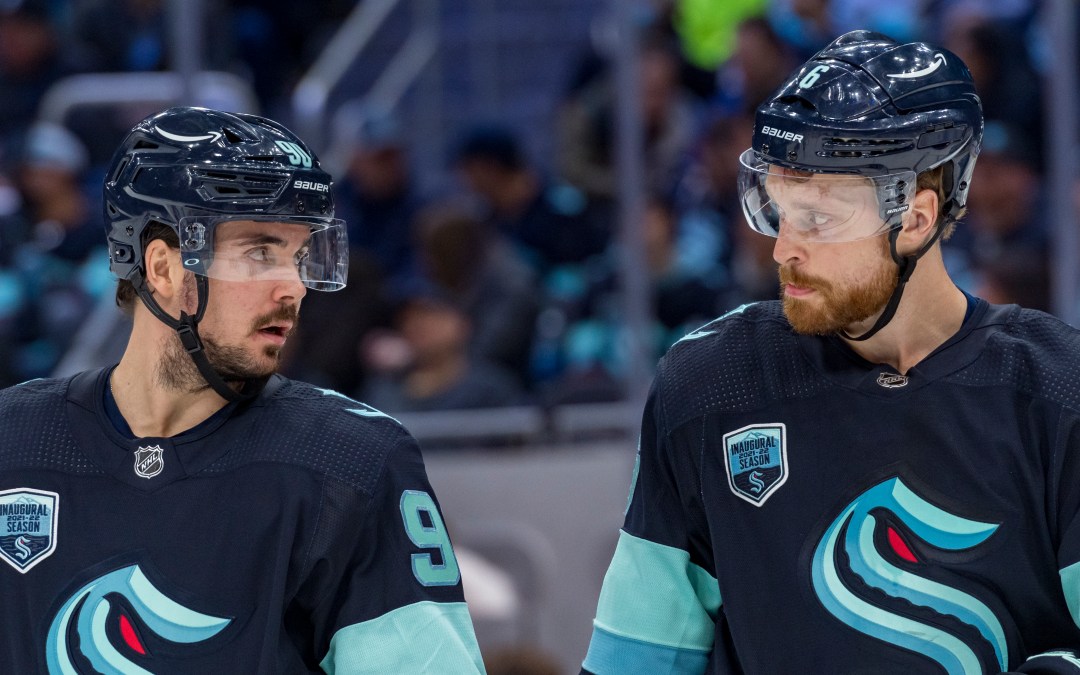 There are memorable games, and there are forgettable games. Wednesday’s 4-1 Kraken loss to the Anaheim Ducks is one that you would file under “forgettable.” Seattle came out flat as a pancake, and an outstanding Anaheim team took advantage with two first-period goals. It was 3-0 before the Kraken got on the board, and the pushback was—as we’ve seen a few times over the past couple weeks—way too little and way too late.

Here are our Three Takeaways from a uninspiring Kraken loss to the Ducks.

Our Twitter mentions were once again ablaze with fans who weren’t loving Philipp Grubauer’s play through two periods on Wednesday. The first goal was certainly not on him, as Jared McCann got taken out on the backcheck and crashed into his netminder just before the shot. But Grubauer also gave up a short-handed goal to Derek Grant in the opening frame that he would have wanted back.

Though this goal was off a two-on-one rush, Grant shot from reasonably far out with no screen or deflection, yet it went right through the wickets. As a goalie, this is the kind of shot you absolutely hate letting in. We’ve seen goals like this—unscreened, from distance, right through the goalie—on too many occasions. When these go in, it tends to deflate a team, and the Kraken already looked to have minimal air in their tires.

If you’ve been following along both here and on the Sound Of Hockey Podcast, you know we’ve been big defenders of Grubauer through the first two months of this inaugural season. We still firmly believe that he will get to a level that we all expected coming in, and he has shown flashes of this, but finding consistency has taken longer than any of us would have liked.

The big story on the Grubauer front, though, was his exit after two periods due to injury. Midway through the frame, Sam Carrick went hard to the net, and Jaden Schwartz laid a big hit on him right in the crease. Carrick bounced off Schwartz and crashed into Grubauer, who was slow to get up. Oddly, Schwartz and Carrick both got penalties on the play, though we aren’t convinced either player deserved a call. Also odd, there was no physical response from Seattle after their starting goalie got run by Carrick.

Grubauer gutted it out for the rest of the period, but he was seen talking to the medical staff during a TV timeout and looked to be in some discomfort. He exited after the second period and was replaced by Chris Driedger.

Coach Dave Hakstol did not have much of an update after the game, but confirmed it was injury that led to Grubauer’s departure, and also implied that it was a lower body injury without directly stating that.

Takeaway #2: Kraken were flat from the jump

There’s not much to say here, so we’ll keep it short. But the Kraken did not look like they had much jump in their legs on Wednesday against the Ducks. Sure, Seattle did play the night before in San Jose, but the fatigue associated with back-to-backs usually comes toward the end of the second game, not the beginning.

“We have to be sharper, that’s the bottom line,” captain Mark Giordano said. “Back-to-backs shouldn’t matter in this league. Everyone’s in good shape. We just weren’t sharp enough with the puck and with our reads.”

Takeaway #3: The Ducks are good

Remember the winning formula we talked about for Seattle on our last Three Takeaways? Well, the Ducks deployed that formula to perfection against the Kraken on Wednesday, and cruised to an easy win.

Give Anaheim credit. That’s a good team that came in rested and looked every bit like a club that has picked up points in eight of its last nine games. With so much youth on the roster, there’s been some expectation that the Ducks would eventually hit bumps in the road. But so far they have shown that they deserve everything they’ve gotten to this point and belong in first place in the Pacific Division.

The Kraken are going to have a hard time with this Ducks team for many years to come.