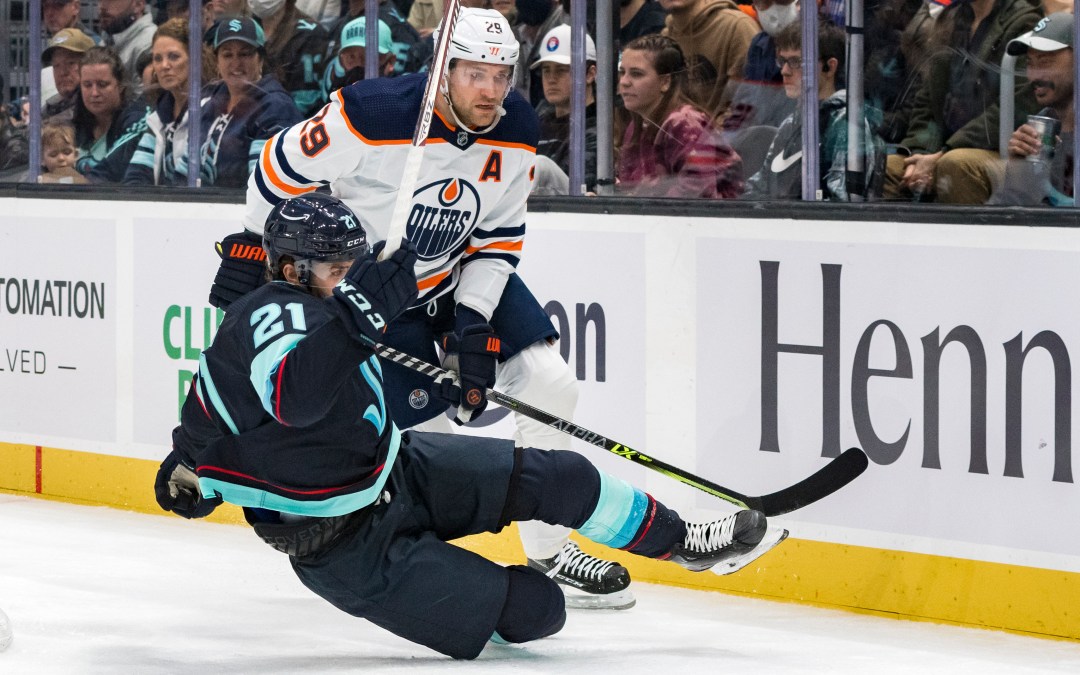 There’s always a little mental dance being done in warm-ups, as we watch carefully to try to determine if any Kraken players are missing. Absences typically reveal themselves during line rushes, which come about five minutes into the pre-game skate. When those line rushes start, we take inventory. Vince Dunn and Adam Larsson, check. Morgan Geekie, Ryan Donato, and Joonas Donskoi, got it. Haydn Fleury with Mark Giordano, ok. Jordan Eberle, Jaden Schwartz… WAIT A MINUTE! Giordano and Fleury?! Where’s Jamie Oleksiak? That pretty much sums up what went through our minds as the Kraken prepared to take on the Oilers Saturday.

What a strange week this has been. As Giordano said, it felt like the beginning of the pandemic all over again, as news was breaking almost by the minute that more players, coaches, and staff had been added to COVID protocol, and more teams were being shut down. Even up until game time on Saturday, we still weren’t entirely convinced that the Kraken and Oilers would play.

But play they did, even as Edmonton dressed fewer than the usual 20 players. With five guys in COVID protocol and more injured, the Oilers were out of cap space to fill their roster, so they played with 19.

Seconds after we noticed Oleksiak’s absence, Kraken public relations confirmed that he was in COVID protocol. After seeing how things have transpired around the league with such rapid transmission throughout teams, the news felt heavier than the previous times Seattle has made such announcements this season. With two games already postponed—Sunday’s game against the Maple Leafs and Thursday’s game in Calgary—the Oleksiak revelation felt especially ominous.

You probably aren’t here for a bunch of COVID talk, though, because you’re certainly getting plenty of it elsewhere, so let’s get to our Three Takeaways from a 5-3 Kraken loss to the Edmonton Oilers.

Adding injury to viral infections (is that the saying?) William Lagesson of the Oilers hit Kraken fan favorite, Brandon Tanev, hard into the boards behind the Edmonton net late in the third period. It was a good, clean hip check and looked innocuous. As the play went the other way, though, Tanev didn’t get up.

Our initial hope was that it was a bad Charley horse, and he would shake it off. But he stayed down on all fours until the training staff came and looked after him. He was then helped to the bench and down the tunnel putting minimal or no weight on his right leg.

Coach Dave Hakstol did not have an update after the game, but from our vantage point, it didn’t look good. Here’s hoping for a Turbo-speed recovery.

Takeaway #2: The structure was there, but the possession was not

This was a different type of loss for Seattle from what we’ve seen in previous defeats. The team didn’t make too many glaring mistakes, it got good goaltending from Chris Driedger, and it had opportunistic scoring. Goals by Donato, Jared McCann, and Carson Soucy came despite Seattle not throwing that many pucks at Stuart Skinner, who looked shaky early on but made some huge saves as the game progressed.

The problem on Saturday was simply puck possession, which isn’t a typical difficulty of the Kraken. Edmonton took a hair over 70 percent of the five-on-five shot attempts in the game, which indicates an enormous share of the possession time. Unsurprisingly, the Oilers more than doubled the shots on goal of the Kraken, registering 41 to Seattle’s 17.

Those numbers would also paint the picture of an utterly dominant performance by the Oilers, but it really didn’t feel like that. The Kraken did have pretty good structure, limited odd-man rushes, and kept most shots to the outside, but when you allow that many shots to get to your goalie, some of them are eventually going to find the back of the net.

The best example of what can happen when teams throw a bunch of shots at your net came on Warren Foegele’s controversial game-winning goal.

Evan Bouchard shot from well out, as was the case so many times on Saturday. Driedger made the save, but the rebound popped up in the air. Giordano leveled Foegele, but he did so right into his goalie and also propelled the puck into the net. It was waived off for goalie interference, but an Edmonton challenge was successful and brought the game to 4-3.

The Kraken don’t really make a mistake on this play. The shot comes from the perimeter, and Giordano is clearing the bodies out from the front of the net, exactly like he’s supposed to do. But again, if enough pucks get through, eventually a team gets a bounce, and it goes in.

We thought we should close this one out with a slice of positivity because there’s just too much doom and gloom in the world right now. So let’s talk about Donato scoring goals in three consecutive games and playing Rock, Paper, Scissors with a young fan during warm-ups.

We wondered aloud in our preview for Saturday’s game if Donato’s move to the third line was a direct result of him scoring goals in two games in a row. Donato and Donskoi (Donnie and Donnie) moved back to a trio centered by Geekie. Geekie is more offensively dangerous than Alex True, who had been centering that all-former-Shark line, so we thought it might be a sign that Hakstol was trying to give Donato a chance to build on his offensive success.

“Yeah, you know, Donnie scored again tonight,” Hakstol said. “He also had a real good chance in the third period. We put that group back together because of the familiarity that they’ve had and some of the production that they’ve had together.”

Ok, so maybe that’s not quite the “we were rewarding Donato” answer we were looking for there, but Hakstol is at least saying that he hoped the trio would show some of the production that they’ve shown in the past. Regardless of the reasoning, Donato cashed in early in the first period, when Geekie dropped him a pass and he pulled the trigger from distance, slipping it through the wickets on Skinner.

It really is great to see Donato scoring goals and playing with confidence. He has worked hard, been a healthy scratch at times, and done everything asked of him in third- and fourth-line roles. “It just starts going in and you just got to continue to do the same work that you’re doing,” he said Saturday about the confidence he’s showing. “I mean, if you kind of take your foot off the gas, I think those opportunities and those chances don’t really come your way.”

He does need to work on his Rock, Paper, Scissors game, though.

Said Donato, “When you can do something like that, I mean, it’s so simple and easy, and it can make a kid’s day. I’m all for it.”