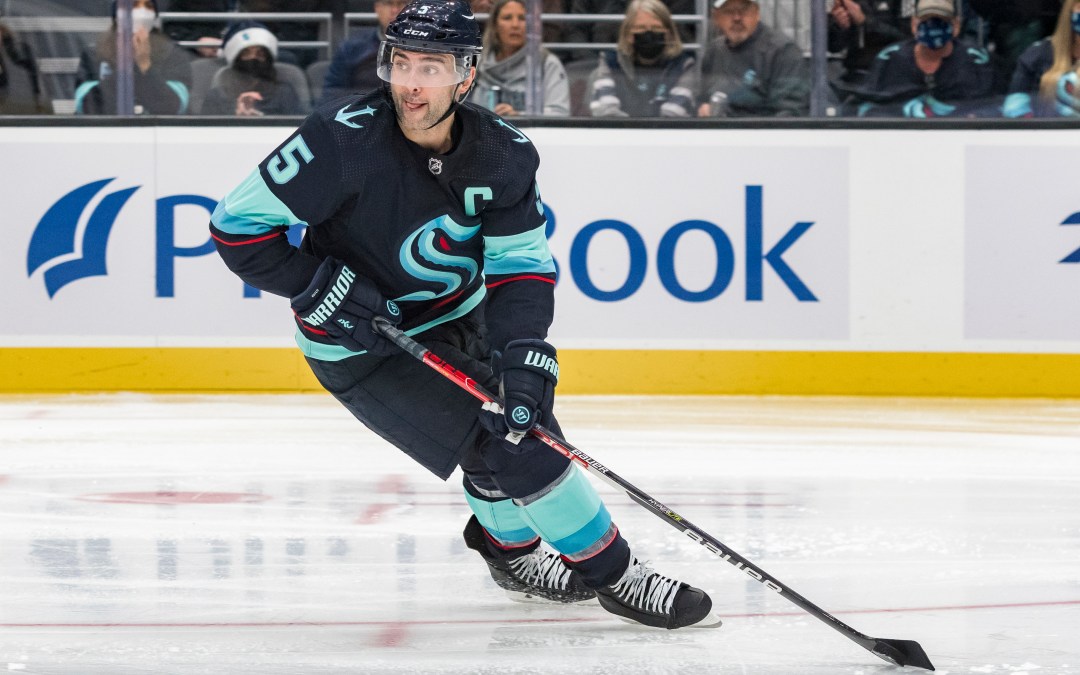 Our heads are still spinning after the Kraken went from tied 3-3 with under four minutes left in the game to losing 6-4 to the Calgary Flames on Thursday. It was a downright bizarre finish, as Seattle found—in the words of Mark Giordano—another “new way to lose.”

The losses are piling up again for the Kraken. That’s four straight and seven of their last eight, and the team’s grip on last place in the Pacific Division is getting stronger by the day.

Here are our three takeaways from an exciting but ultimately disheartening Kraken loss to the Flames.

We literally JUST talked about this. The Kraken allowed the tying goal to the Flyers on Wednesday 15 seconds after taking the lead. On Thursday, late in the third period, Jared McCann deflected a Giordano shot past Jacob Markstrom to tie the game 30 seconds after Andrew Mangiapane had put the Flames ahead on the power play. The building erupted as Seattle made it 4-4.

But as quickly as energy was injected into Climate Pledge Arena, it was then sucked right back out. This time it took just 13 seconds after Seattle scored for it to allow a crucial goal, and this time it would prove to be the game winner as Matthew Tkachuk beat Chris Driedger on a goal that he was not happy to give up.

Both Adam Larsson and Jeremy Lauzon had chances to get the puck out of harm’s way on the game winner, but it was bouncing around and neither player got good enough wood on it to clear it.

Regardless of how the goal went in, it’s absolutely bonkers that this happened for the second night in a row. You simply cannot immediately give up goals after scoring—especially in the third period—and expect to win. That almost always spells doom.

Takeaway #2: We may have jinxed Chris Driedger

“I just need to be better,” Driedger said after the game. “Those last two goals can’t go in.”

To be fair to Driedger, the first of the two he’s referencing was a rebound off a hard shot on a late power play, so it’s hard to blame him for that one. But he could have and perhaps should have had the game winner.

Do you think we jinxed him with this tweet?

As we started to field questions on Twitter about whether or not he should be getting the lion’s share of the starts over Philipp Grubauer, the wheels came off for Driedger and the Kraken as the Flames somehow scored two plus an empty netter to skate away with a late win.

If you take away the fifth pivotal goal, he really did play well. But coach Hakstol twice used the phrase “we didn’t get a save” in explaining what happened on the Tkachuk goal, and that tells us he’s not overly enamored by the play of Driedger either.

Because we enjoy a little positivity around these parts from time to time, we’re going to throw in a couple of happier nuggets to close this thing out. First off, Mark Giordano seems to really enjoy playing against his old team. Back when the Kraken visited the Saddledome in preseason, Giordano opened the scoring.

On Thursday, he did the same thing, then added two assists on the night, setting up the Calle Jarnkrok goal nine seconds into the second period and wristing the shot that McCann deflected home to briefly tie the score in the third.

Asked if he got any joy out of the offensive outburst, Gio said, “To be honest, it would have been a lot better night if we would have picked up two points.”

Yes, the team lost, and yes it came in devastating fashion, but Giordano had his best offensive game of the season, so we thought it was worth calling that out.

One thing we noticed the Kraken doing more frequently than usual on Thursday was making long stretch passes from deep in the defensive zone up through the neutral zone. Will Borgen connected on two, one of which sprung McCann for a breakaway in the second period. The other led to a great passing play that Jarnkrok just missed on late in the game.

Early in the third, Carson Soucy also connected on a long pass from behind the Kraken goal line with Jarnkrok at the far blue line. Jarnkrok went through the seam to Colin Blackwell, who then dished to Yanni Gourde at the netmouth for an easy tap in.

We asked Hakstol about this after the game to see if this is something Seattle is actively trying to do more.

“We want to have one guy pushing for space at all times,” he said. “A lot of times it’s not going to be available. We were able to generate a breakaway with it tonight, as it was available through the middle with the McCann chance in the second period. But you know we always want to have at least one guy pushing for space and at certain times two. Even if that’s just a possession play to get us out of the zone and through the neutral zone.”

So, it’s not necessarily something that was new to Seattle’s game, but it worked more than usual on Thursday. We’re curious if we start to see more offense generated from plays like this moving forward.

Hey, Happy New Year, gang! Thanks for following along in 2021. It’s been quite the ride so far.