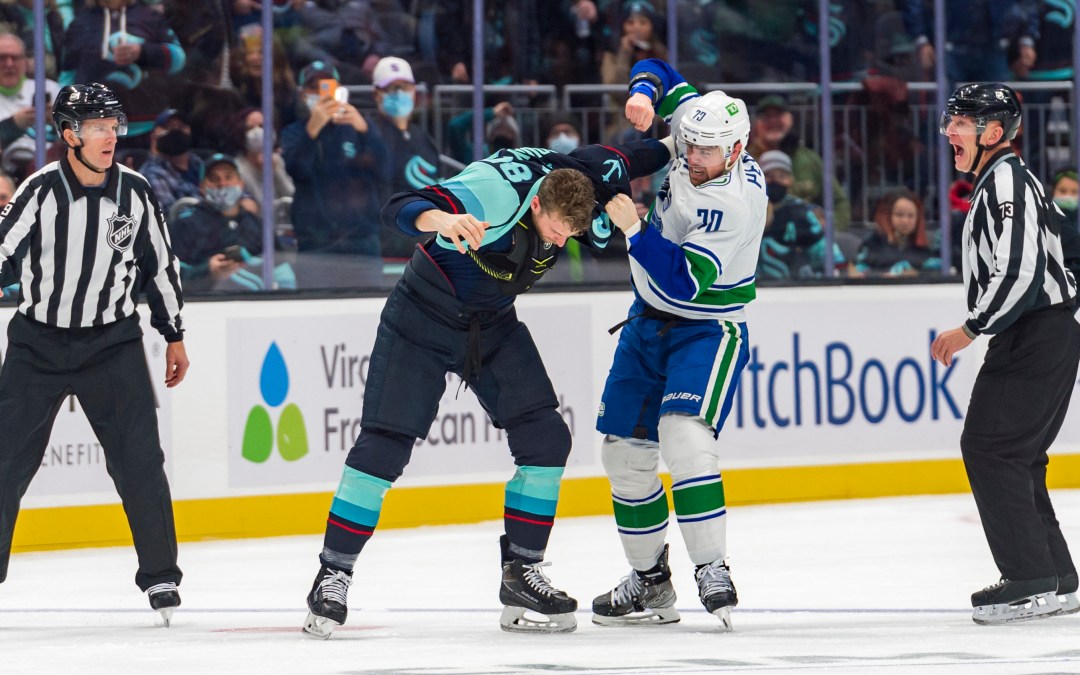 [Sigh.] Well, that was another discouraging loss for the Seattle Kraken, who have now dropped five in a row and eight of their last nine. While there were cool things happening off the ice at Climate Pledge Arena on Saturday, what happened on the ice was ugly at times and ended in a 5-2 defeat. Here are our Three Takeaways from the second Kraken loss of the year to the Vancouver Canucks.

Will Borgen had a fantastic game Thursday against the Flames, connecting on multiple stretch passes to generate offense and jumping up in the rush like a veteran offensive defenseman. On Saturday, Borgen was the last Kraken player to touch the puck before two of Vancouver’s goals.

The first Canucks goal, which came at 8:53 of the first period, was especially painful for Borgen and the Kraken. The young defenseman was trying to make a breakout pass to Calle Jarnkrok, but as he released the puck, Nils Hoglander hit him in the corner. The pass missed Jarnkrok by a country mile and instead went right onto the tape of skilled rookie Vasily Podkolzin, who fired it home.

The third goal against, which came early in the third period, was—to the credit of the Canucks—created by a good forechecking play by Juho Lammikko. But again, it was Borgen from whom he stripped the puck, and a second later Tyler Motte put it in the back of Seattle’s net.

Some blame could be placed on Philipp Grubauer’s handling of the puck here as well, as he may have handcuffed Borgen with a delayed four-foot pass. Even so, it looked like Borgen had enough time to make a play.

“We put two pucks directly on their tape in scoring areas,” coach Dave Hakstol said after the game. “That can’t happen. That’s the bottom line… I look at the first goal and the third goal. Those are pucks that are in our possession that ended up on their tape, really without a whole lot of pressure.”

Borgen redeemed himself by scoring his first NHL goal later in the frame on a nice shot from the point past a Ryan Donato screen.

The tough thing for Borgen and others like Haydn Fleury and to a lesser degree Carson Soucy is that there are eight defensemen on this team. When glaring mistakes happen, Hakstol’s decision on who to scratch for the following game becomes a bit easier.

Borgen wasn’t alone in making defensive gaffes on Saturday. Vancouver’s fourth goal was like something out of the Benny Hill Show. Mark Giordano and Jamie Oleksiak ran into each other behind the net. Giordano gave Oleksiak the old can opener trick, getting his stick tangled between Oleksiak’s legs. Oleksiak fell and ripped Giordano’s stick out of his hands, and sure enough, Vancouver came away with the puck, which Conor Garland eventually deposited in the Kraken goal.

Takeaway #2: They did it again

For the third game in a row, the Kraken conceded a goal within a minute of scoring at the other end in the third period. In the previous two games, those goals against represented the tying goal for Philadelphia and the winning goal for Calgary.

On Saturday, Seattle was battling to get back in the game after Borgen scored to atone for his second booboo. But the Garland goal—the one caused by Giordano and Oleksiak comically running into each other—came just 46 seconds after Borgen’s tally.

Hakstol shrugged it off, saying he doesn’t think giving up quick response goals after scoring is a problem for this team and that they had addressed it after the previous two games. But Adam Larsson dug into it a bit more.

“Trust me, we’re trying not to get scored on,” Larsson said. “It’s a hard league. It’s something we really need to figure out. It’s been an issue for us, and we have talked about it. I think we should expect the push and… It’s frustrating, but at the same time, we have had some answer for those goals too, so it goes both ways.”

When we tweeted that quote last night, one of our followers, Kevin Alschuler, PhD, a sports psychologist, replied with a very interesting thread explaining what’s happening for Seattle and why the team is giving up these response goals. We found it interesting, so give that a read here!

The feel-good story of 2022 so far stems from this tweet that went out from the Vancouver Canucks on Saturday morning, prior to their game against the Kraken.

Red Hamilton and Nadia Papovici reunited before this second meeting between these teams. Papovici was then honored on the Jumbotrons, and it was announced that together the Kraken and Canucks would be giving her $10,000 toward her med school tuition.

How cool is that?!

There were other cool game-ops things that happened Saturday as well, as Rod Masters—the organist from Slap Shot—made his triumphant debut for the Kraken. He played both national anthems before the game, then during the game was allowed to play Lady of Spain in its entirety. This time, Reg Dunlop did not rudely rip up his sheet music and scream at him to never play it again.

The Kraken also welcomed 98-year-old Eunice to her first game at Climate Pledge Arena. She shared with Strawberry, the arena host, that her 99th birthday is coming up in two weeks. So with Masters leading the way, the crowd in attendance sang Happy Birthday to Eunice.