Around the Boards: COVID, Brandon Tanev, and hot takes 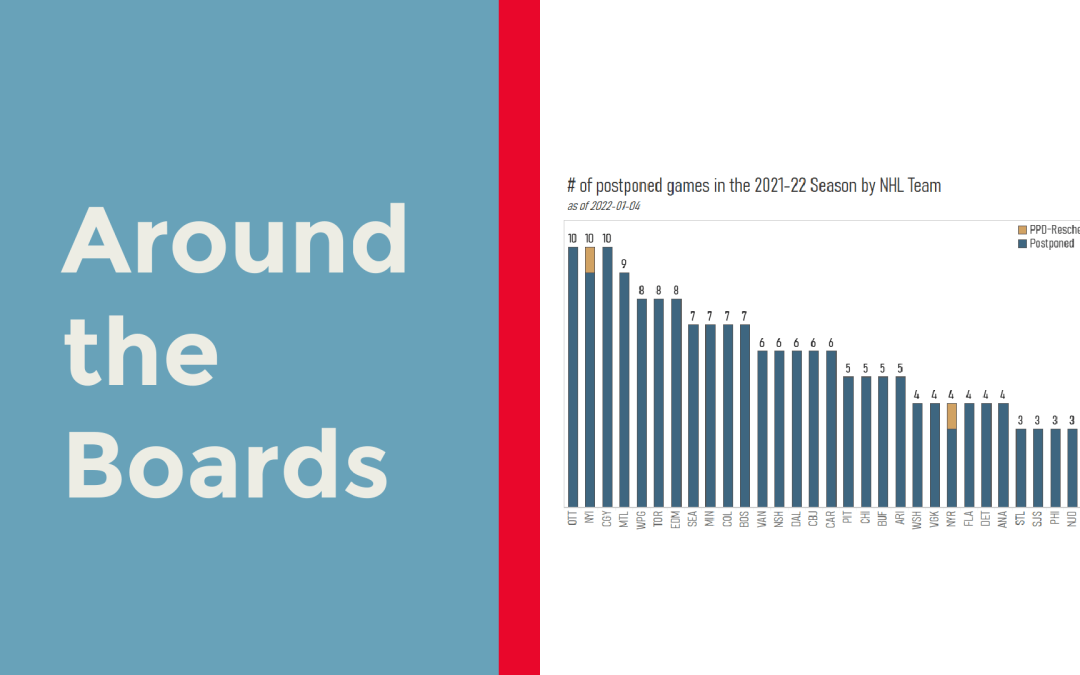 With a break in the Seattle Kraken schedule, here is a trip around the boards, giving you some quick hits on what’s been happening with the team of late.

If you have not heard by now, the only game remaining on the Seattle Kraken schedule this week against the Ottawa Senators has also been postponed. The Senators added Thomas Chabot, Chris Tierney, and Zach Sanford to their COVID protocol list that already had six players on it.

The next game on the schedule will not be until Jan. 10 against the Colorado Avalanche in Denver. The Senators game postponement leaves the Kraken with seven postponed games, four home games and three road games.

With the participation of NHL players in the Winter Olympics this year officially nixed, it is a safe bet that several of the postponed games will be rescheduled during the break that was originally intended for the Olympics. That window is only 16 days, Feb. 7 to 23. If all seven games are rescheduled in that window, that will be a game every 2.3 days. That rate of days per game is consistent with the normal rate of days per game, but if we see any other cancelations, it will get tight.

The Kraken are lucky that the three away games that need to be rescheduled are all clustered in Canada so it might be possible to just add one road trip to the schedule to make up the Vancouver, Calgary, and Winnipeg games.

Here is a look at all the postponements across the league by team:

It is interesting to see that Seattle has one of the highest non-Canadian team postponements.

Speaking of COVID, as of Monday morning, Mason Appleton was cleared off the COVID-19 protocol list and was able to practice with the team for the first time since the Christmas holiday break. Just as Appleton was coming off, Alexander Wennberg was added to the COVID protocol, joining Jeremy Lauzon who has been on since Jan. 1. With the postponement of the Ottawa game, both Lauzon and Wennberg are likely to be cleared before the Kraken head to Colorado for their next scheduled game on Monday.

Fan favorite and overall maniac, Brandon Tanev, underwent successful knee surgery on Dec. 30. The team is reporting that he should be ready for the start of the 2022-23 NHL season.

Brandon Tanev had successful knee surgery on Dec. 30 and is expected to return for the start of the 2022-23 NHL season.

The Kraken have certainly been struggling to get in the win column lately. After two competitive games against the Flyers and Flames last week, the Kraken never got their footing on Saturday night against the Canucks. Seems that everyone had an opinion on what is wrong with the Kraken Monday morning:

Predictive Models Said the Kraken Would Be Great. They Suck. What Happened?

Where it all went wrong for the Kraken this season

All three articles give their best guess at what is wrong, and each author’s take probably has a little truth to the Kraken’s shortcomings this season. Most of the authors reference preseason analytical models that predicted the Kraken to be a competitive playoff team, which makes me wonder if maybe the models were wrong from the start. The articles are worth a read if you want to understand some of the theories being floated around the Kraken’s cold start to the season.

In case you missed it

In the feel-good story of the week, read about how one Seattle fan might have saved the life of the Canucks’ Assistant Equipment Manager, Red Hamilton.

After alerting @Canucks Asst. Equipment Manager Brian "Red" Hamilton of a cancerous mole on his neck, the #SeaKraken & Vancouver teamed up to surprise Nadia Popovici with $10K for medical school.

Get to know the Kraken fan who saved Red's life → https://t.co/MhBfWDHlFM pic.twitter.com/JZhze1gsq6

Climate Pledge Arena announced they will be hosting a WHL game between the Seattle Thunderbirds and Everett Silvertips on Feb. 26. Tickets go on sale Jan. 10.

Seattle, are you ready for a 𝗕𝗮𝘁𝘁𝗹𝗲 𝗼𝗳 𝘁𝗵𝗲 𝗦𝗼𝘂𝗻𝗱? 🌊

We’re excited to host the @SeattleTbirds #UnderOurRoof as they take on the @WHLsilvertips on Saturday, Feb 26. Tickets on sale Monday, Jan 10 at 9AM → https://t.co/kI4gIubmGw pic.twitter.com/Ltup42E3VM