What the Jaden Schwartz injury means for the Seattle Kraken 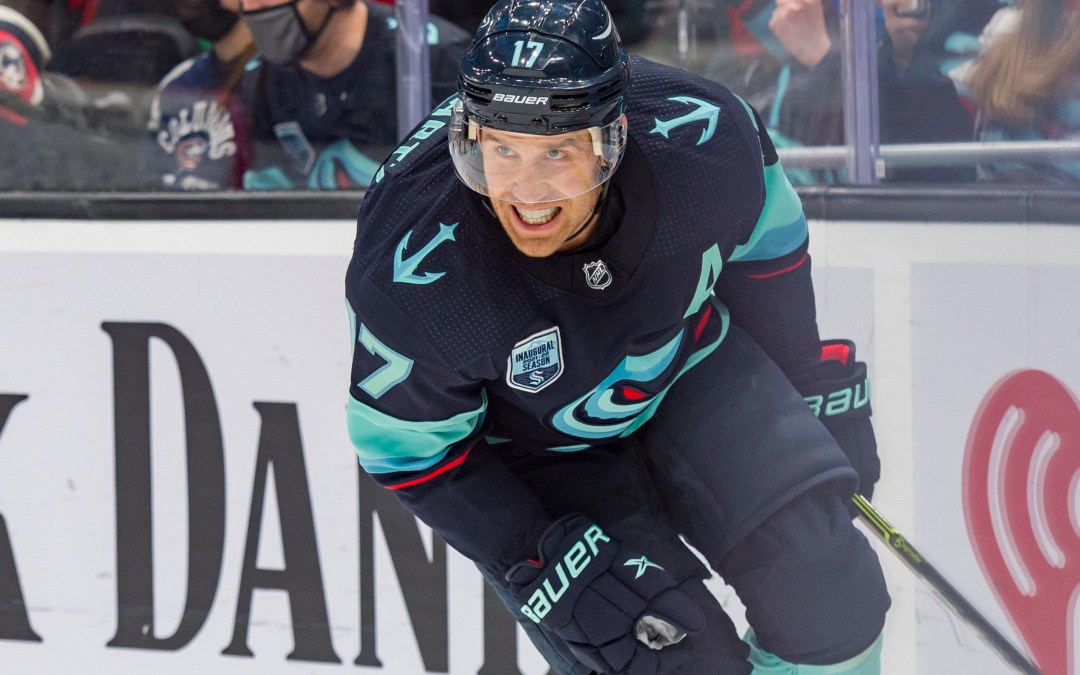 As mid-season training camp (that’s what we’re calling this week) continued for the Seattle Kraken on Friday, the team was all smiles. The players battled, scrimmaged, and celebrated their goals against one another. With all three of their games postponed due to opponents’ COVID-related issues this week, it’s been an interesting opportunity for the Kraken to reset and hopefully clear their minds before getting back into the swing of things Monday in Colorado.

Although the schedule has been segmented by postponements and an unexpectedly long holiday break, the Kraken are still actively on a five-game losing streak. You wouldn’t know that based on the mood at Kraken Community Iceplex, where things have been upbeat and energetic.

As the Kraken march toward returning to action, a key player in Jaden Schwartz has been noticeably absent.

Since news broke that Brandon Tanev would miss the remainder of the season after having surgery on an injured ACL, the last thing Kraken fans would have hoped to see was Jaden Schwartz going on the shelf for four to six weeks. But that has indeed happened, as the team announced Thursday that the top-line forward will have hand surgery.

For a club that’s already struggling, these are two massive blows in a row. Schwartz is such an integral part of the lineup at both ends of the ice and has been a driver for this team all season long. And even looking at the line combos that coach Dave Hakstol employed at Friday’s practice, the absences of Schwartz and Tanev make the team look much thinner on all four lines.

Schwartz has six goals and 14 assists in 29 games this season and has registered more than 20 minutes of ice time on seven occasions.

Alex Wennberg is in COVID protocol, but there is a good chance he returns in time for the game against the Avalanche. That will have a significant trickle-down impact, as he likely will get inserted back into the top six. Nonetheless, somebody will need to step up to fill the new void of Schwartz, while Hakstol simultaneously looks for the right mix to backfill for Tanev.

The loss of Schwartz has perhaps the biggest effect on Jordan Eberle, who has been attached at the hip to Schwartz for much of the season. Marcus Johansson took Schwartz’s spot on the top line at Friday’s practice, skating alongside Eberle and Jared McCann.

“We’ve got JoJo with us now, and we’ve had a good week of practice here,” Eberle said Friday. “We’re going to get a lot of offensive zone chances and a lot of offensive zone shifts, so we have to find a way to create some offense, and that’s what we’re looking to do. When a guy goes down like Schwartz, you got to pick it up collectively. [There’s] not one guy [that] can do it.”

Said Hakstol, “Just as it always is with an injury, other players have to step in and do the job.”

It’s downright bizarre to have this week-long break in the middle of the season, especially after the longer-than-usual holiday hiatus. The Kraken seem to be embracing the time off, though, as they have had longer on-ice sessions this week with plenty of battle and endurance drills.

“I think for us, we needed some practice time,” Eberle said. “I think you look at how the season’s gone and where we are, obviously we’re not happy with it. We’re out of a playoff spot and trending in the wrong direction. We’ve had this week to find some answers to what we’re doing wrong and obviously just get a little bit of a mental break more than anything and try to re-group as a team.”

It’s been a rare opportunity for Hakstol to really focus on fixing issues that have been plaguing his team.

“I didn’t like our last performance, so we want to leave that in the past,” Hakstol said, referring to Seattle’s Jan. 1 loss to the Vancouver Canucks. “The biggest thing is our level of togetherness and compete. Going out with good detail and competing hard through 60 minutes and being a consistent hockey team, those are the things that I’m looking for.”

The second ice sheet at Kraken Community Iceplex is visible from the Starbucks that is housed within the facility. In one of the windows, we spotted a sign Friday that read, “Gruby is our fave customer.”

We managed to snap a photo of said favorite customer with the sign in the background (you may have to click the tweet to actually see the full photo).

We asked the Starbucks employees what makes him their favorite, and they indicated that Grubauer is the only Kraken player that stops by regularly.