SOH LIVEBLOG: Kraken get shut out for third time, lose 5-0 to Blues 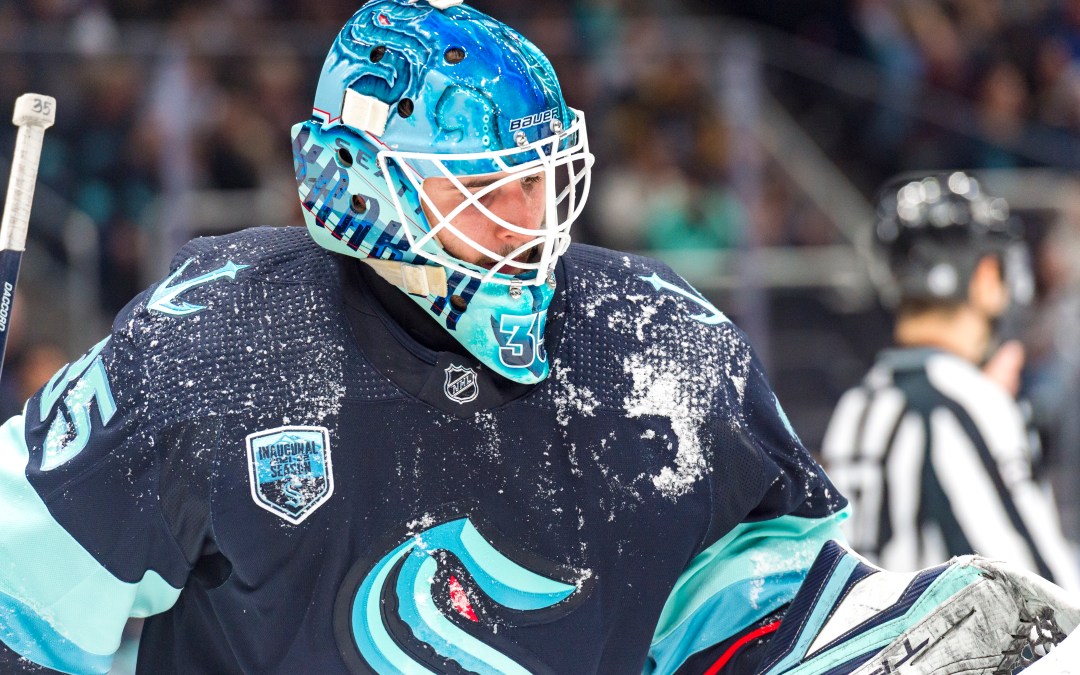 Don’t look now, but the Kraken are on a winning streak! Yeah, we know it’s only been two games, but nonetheless, seeing them get rewarded for their hard work this week has been a sight for very sore eyes. The Kraken look to extend their streak to three games Friday, as the St. Louis Blues make their first visit to Seattle.

Seattle had one of its best games of the season Monday against the Blackhawks, and deserved the shootout win that they eventually received. It was a borderline dominant performance that only went down to the wire because of otherworldly play in net by Marc-Andre Fleury. The Kraken lacked the same impressive dominance on Thursday against the Sharks, and frankly looked sloppy in the first half of the opening period.

The boys turned it on in the second, and Carson Soucy scored twice to give Seattle a lead that it never relinquished, despite taking four penalties in the third period alone.

Philipp Grubauer had his second positive performance in a row, stopping 23 of the 25 shots he faced. With Seattle on the second of back-to-backs Thursday, though, and with Chris Driedger still unavailable due to COVID protocol, coach Dave Hakstol is doing the smart thing by resting Grubauer. We thought he might be tempted to throw Grubauer right back in there, but with the starting netminder’s confidence just starting to build, turning to Joey Daccord is the right move for the Kraken against the Blues.

So, about Daccord… The friend of the Sound Of Hockey Podcast has made good use of his time with the AHL’s Charlotte Checkers and has put up some outstanding numbers down there, notching a 2.18 goals against average and .925 save percentage in 14 games. His NHL numbers don’t show it this season, but he really has played well (but been hung out to dry) in his few appearances with the Kraken.

Seattle is playing better now than they have during other Daccord stints, so let’s see if his AHL success can transfer to the big club.

With no morning skate Friday, Hakstol played lineup changes close to the vest. He wouldn’t say if Jamie Oleksiak might be ready to return from a non-COVID illness, so we will see.

The Blues are third in the Central with a 23-11-5 record and 51 standings points. These two times played each other last week in St. Louis on a night when Driedger deserved to win, but the Kraken were done in by a late power-play goal by Blues forward Pavel Buchnevich.

This is a good team, but Seattle has proven it can skate with pretty much anybody. The Kraken came very close to winning that road contest against the Blues last Thursday, but got into penalty trouble—much like they did against the Sharks on Thursday—and didn’t generate enough offensively.

Really interesting shake-up of the lines by Hakstol. Yanni Gourde, Jared McCann, and Jordan Eberle have all been quiet of late, so the Kraken are going with a new mix.

Karson Kuhlman appears to be a scratch one night after making his Kraken debut, as Colin Blackwell is back in. ALSO back in is Haydn Fleury, who will be playing his first game since Jan. 1. Sheesh!

With Oleksiak apparently not ready to return, we are not surprised to see Jeremy Lauzon come out of the lineup after he took two straight penalties on Thursday.

The Blues got on the board first with a short-handed goal. Brandon Saad and Tyler Bozak got a two-on-one. Saad dished to Bozak, and Bozak buried it in a yawning cage. The goal came at 5:54.

…And just like that, the Kraken were chasing again.

The Blues scored again at 10:23. With Adam Larsson in the penalty box for delay of game, David Perron shot from high in the zone. Ryan O’Reilly deflected it toward Daccord, who made the first save, but the puck squirted out to Brayden Schenn for an easy tap-in.

In all, it was a pretty sloppy period by the Kraken, which felt very similar to the first frame on Thursday. The boys did wake up a bit in the last five minutes and had some good looks but were ultimately a little too cute with their passing.

Daccord made one of the best saves of the season early in the second. On a partial two-on-zero, David Perron passed to O’Reilly for a sure goal. But Daccord did a full spit and just got his toe on it. Man, what a save that was.

Robert Bortuzzo nearly took Ryan Donato’s head off, just as Donato was releasing a shot off the rush. Donato was ok, but it was a very dangerous hit. Somehow Bortuzzo only got two minutes.

The Kraken looked better in the second and also got bailed out a couple times by Daccord. They put 15 shots on Ville Husso, including a breakaway by Riley Sheahan. Still, it really didn’t feel like they tested him all that much, despite the relatively high number of shots. They did apparently take a lot of shots from the left point through two periods, according to NaturalStatTrick.com.

It took the Blues just 24 seconds of third-period play before they stretched their lead to 3-0. Off a three-on-two rush, Vladimir Tarasenko passed to Torey Krug in the slot, who just deflected it to Buchnevich on the far side. Buchnevich ripped it off the bar and down.

The wheels officially came off the wagon after a Kraken power play. Colton Parayko (yes, the 6-foot-6, 220 defenseman) stole the puck from a tired Jordan Eberle at the Kraken blue line. Parayko went in on a breakaway, and Eberle hooked him, giving Parayko a penalty shot. Parayko scored.

Jordan Kyrou scored the fifth Blues goal of the night after he took a pass from Robert Thomas (the hockey player, not the singer of Matchbox 20), and deked around a sprawling Daccord.

The Kraken looked quite sluggish from start to finish Friday. Just not much going on offensively.