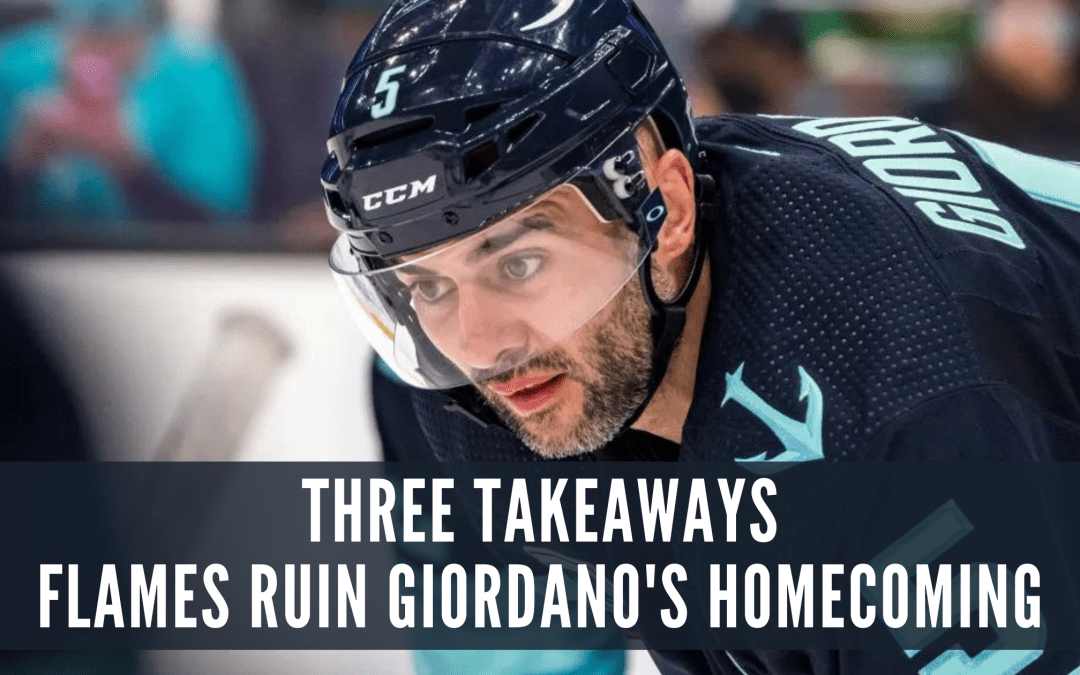 How dare the Flames ruin Mark Giordano’s homecoming by beating the Kraken 2-1 in Calgary. On a night when Giordano got a minute-long standing ovation prior to the game, Philipp Grubauer was generally awesome, Adam Larsson made his second miraculous save of the season, and Ryan Donato got in a fight (yes, you read that right), the Flames still did the Kraken dirty and came away with their ninth win in a row. Rude!

Did this one stung as much the previous Kraken loss in Winnipeg? We’re not sure, but it was close.

Here are our Three Takeaways from the latest painful loss.

The fact that Calgary just won its ninth game in a row is no fluke. We thought there may have been some underdog magic in the air for the Kraken on Saturday, but the Flames attack was just relentless, even as Philipp Grubauer turned them away time and again.

Leading the way was Calgary’s top line of Johnny Gaudreau, Matthew Tkachuk, and Elias Lindholm. All three of those players have already hit the 20-goal mark on the season, and Lindholm has now scored in seven consecutive games. Tkachuk, meanwhile, has 11 points in six games and got the opening tally just 3:02 into Saturday’s game.

“They did what they do,” coach Dave Hakstol said after the game. “They’re a heavy team, they create possession and put pucks to the net. It’s not the outside shots that are the danger, it’s the second pucks that come back inside much like their game-winning goal.”

We talked recently on the Sound Of Hockey Podcast about what a difference it would make to have a couple top-end forwards on the Kraken, and Saturday was proof of that theory. That’s such a skilled trio, and they are an example of what kind of impact having true top-line skill can make. They’re dangerous every time they’re out there, so you have to throw all your best resources at stopping them, and they still will get the better of you on most nights.

This is a team that has everything working. Look out for Calgary in the playoffs.

Grubauer was excellent on Saturday and deserved better than the 2-1 loss he was handed in the end. In all, he stopped 35 of 37 shots, including a few ten-bellers. His biggest save came in the closing minutes of the first period. (He was outdone slightly in this game by Jacob Markstrom’s two-pad stack in the second and Larsson’s kick save in the third, but still, this was big.)

Noah Hanifin looked to atone for a horrendous turnover that led to Calle Jarnkrok’s goal earlier in the frame, and he set Andrew Mangiapane up with what appeared to be a sure goal. But Grubauer made one of his best saves of the season, shooting the left pad out and kicking it away.

“We’ve given up the first goal in I don’t know how many games,” Grubauer said. “Always the next save is more important, and then the next one and the next one. Depending on the situation, always [just trying to make] timely saves, especially with a couple seconds left in the period. It makes a difference if they go into the period with a 2-0 lead, or if it’s 1-1 or you’re up 1-0.”

At the time, the score was tied 1-1. In the previous game on this road trip, you may recall the Kraken were up 2-0 against Winnipeg before they gave up a shorthanded goal with 12 seconds left in the opening frame. That goal took the wind out of the Kraken’s sails completely and was an obvious turning point in the eventual loss.

The Kraken again found themselves in a decent spot late in the opening period against the Flames, but a goal against at that stage would have thrown the momentum into Calgary’s dressing room. That timely save kept Seattle in a positive spot and was a good sign for Grubauer’s play moving forward.

“He did a real good job tonight,” Hakstol said. “He was solid from the word ‘go,’ he made some big saves at good times, which you need on the road against a good team. I thought he gave us those saves.”

Grubauer simply didn’t get enough offensive support from his team on Saturday.

We’ve always known that Giordano was a fan favorite in Calgary after he spent 15 seasons there, with eight of those as the team’s captain, and became a pillar in the community. So, this was always going to be the “revenge game” scenario with the most meaning among any such game for Kraken players.

The pre-game presentation for him was beautifully done and actually had some Flames fans in TEARS, as Giordano was warmly welcomed back.

Here’s the video that was shown on the Jumbotron.

And here’s Giordano’s reaction to the minute-long standing ovation he received.

Said Hakstol, “I actually barely watched the tribute. I was just watching Gio. No question he’s got very strong ties, and you’d have to ask him about the emotions, but I’m sure there were emotions running pretty high.”

His tenure with the Kraken could end up being short-lived, but having a guy like this to help build the organization in its first season will pay dividends for years to come.