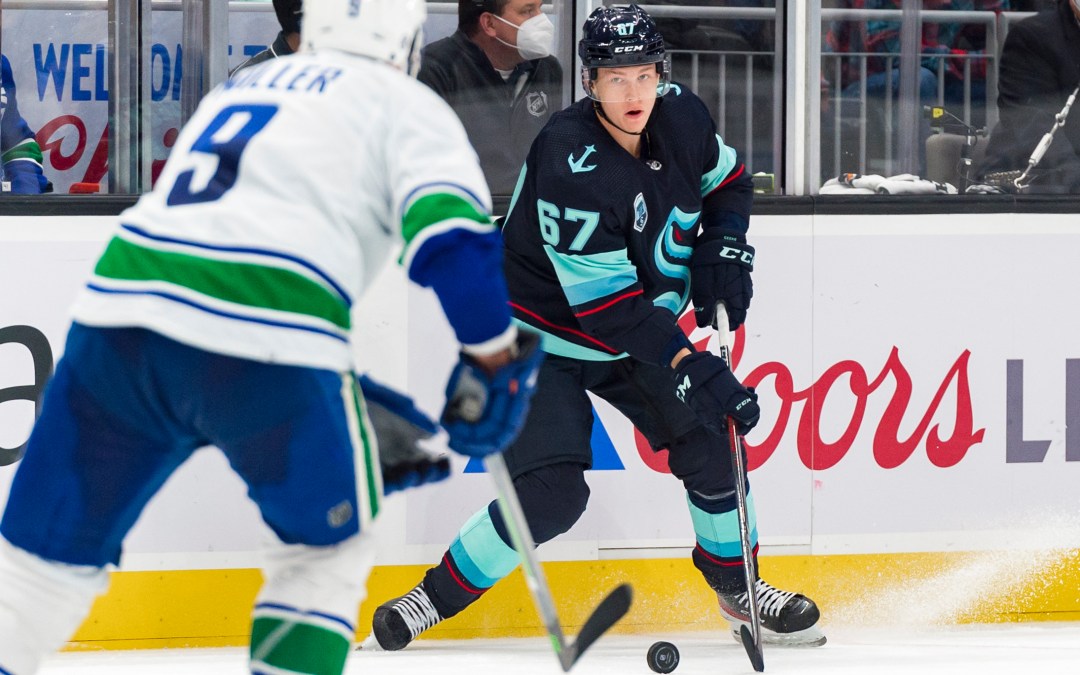 The great thing about the NHL is that when a team has a stinging loss, there’s usually another game right around the corner to help fans move on. Unfortunately, this Kraken road trip has given one long stinging sensation through two games, though. After Seattle blew a 2-0 lead against the Jets, the boys hung with an outstanding Calgary team on Mark Giordano night, giving hope for an unlikely victory, only to concede the winning goal midway through the third period. Thankfully this is still the NHL, and sure enough, the Kraken get another chance to salvage some points out of this three-game trip against the Vancouver Canucks on Monday.

This game also starts an interesting back-to-back with travel, as Seattle follows this contest against its closest neighbor with a home matchup against Mathew Barzal and the New York Islanders on Tuesday. Coach Dave Hakstol indicated that Chris Driedger will get the nod against the Canucks, meaning Philipp Grubauer will likely play behind a more tired squad Tuesday.

Driedger won in his last start on Feb. 11, a 4-3 victory over the Ducks, but gave up three goals in 40 minutes of relief time against the Maple Leafs in a no-decision on Valentine’s Day.

It has been a season of transition for the Canucks in a lot of ways. They went deep into the tank in the early going, which led to the firing of coach Travis Green and general manager Jim Benning (among others) in December. Bruce Boudreau was hired as the new bench boss, while Jim Rutherford was brought in as the president of hockey operations, and Patrik Allvin was named GM. The front office was rounded out with the additions of Emilie Castonguay and Cammi Granato as AGM’s.

The Canucks quickly turned things around and went 8-0-1 in their first nine games with Boudreau at the helm, including a 5-2 win over Seattle at Climate Pledge Arena on Jan. 1. Since that streak ended, Vancouver has produced middling results with a 7-7-3 record in the subsequent 17 games and is coming off a 7-4 home loss at the hands of the Ducks on Saturday.

Despite all the turmoil, these Canucks are still sort of in the hunt. They have passed the San Jose Sharks for sixth place in the Pacific Division and are now five points back of Anaheim and seven points out of a playoff spot.

Young stud Thatcher Demko is expected to get the start for Vancouver in net.

Hakstol confirmed that Morgan Geekie and Carson Soucy will draw back in for Austin Czarnik and Haydn Fleury.

Nadia Papovici, the Kraken fan who warned Canucks equipment manager Red Hamilton about what turned out to be a cancerous mole on his neck, will be at the game. We wonder if Vancouver will do a little celebration for her as well. Remember, these two teams combined to gift Papovici a $10,000 scholarship the last time these teams met. UPDATE: We were disappointed to learn that Nadia was wearing Canucks gear at the game.

Things got off to a VERY fast start in this one. Driedger mishandled the puck on a dump-in off the opening face-off. Behind the net, he erroneously poked it past Giordano and onto the stick of Matthew Highmore. Highmore cycled it back low to Juho Lammikko, who found Tyler Motte in the slot (that rhymes). 11 seconds into the game, the Kraken were already chasing.

To Seattle’s credit, they fought right back and leveled the score at 1-1 at 3:12. On a two-on-one rush, Marcus Johansson made a nice move around a sprawling defender and slid a perfect pass across the top of the crease to Jared McCann. McCann had a wide-open net and potted his 21st goal of the year in his 400th career game against the team that drafted him.

With the first Kraken power play of the game winding down, Elias Pettersson had beaten Vince Dunn at the Canucks’ blue line and was about to sprint through the neutral zone on a breakaway. Dunn held him up and took a smart interference penalty. Surprisingly, it was the Kraken who scored shorthanded just seconds after the Vancouver manpower advantage began.

Joonas Donskoi took a loose puck off the halfwall in the defensive zone and flipped it out of the zone. Recognizing that he was behind Vancouver’s defense and Seattle had the puck, Giordano took off. Donskoi’s flip landed right on the offensive blue line for Giordano, and the captain did the rest, making it 2-1 at 14:26.

It was a good recovery by Driedger and the Kraken after the incredibly early goal. Driedger stopped the next 14 shots he saw, and Seattle took a 2-1 lead to the room after 20 minutes.

The Canucks leveled the score early in the second. Travis Hamonic shot from the outside hash with traffic in front of Driedger. Driedger looked like he had the post locked down, but somehow the puck got through him, with Highmore creating havoc in the goal crease.

We thought there was enough contact between Highmore and Driedger to warrant a goalie interference challenge, but no such challenge was made.

This hilarious play happened seven minutes into the frame:

You don’t see that every day.

Speaking of strange plays, Quinn Hughes fired a shot from a bad angle a few minutes later. Driedger was down against the post, and the shot hit his skate and bounced right out to Vasily Podkolzin in the low slot. Driedger somehow lost sight of it and thought it had gone to the corner. By the time he figured out where the puck actually was, it was in the back of the net.

That made it 3-2, and that was how the period would end. The Kraken were mostly dominated in the frame, and got outshot 18-4. They were in need of a big boost for the third period.

The Kraken started the third period shorthanded, and the Canucks took advantage. Miller made a nice pass to Horvat, who blasted away and beat Driedger over the shoulder. It was another early-period tally, this one coming at 35 seconds of the final frame.

With Driedger off for an extra skater, McCann rang a shot off the post in the closing minutes. The rebound got into the hands of the Canucks, and Tanner Pearson scored an empty netter to make it 5-2.

The Kraken conceded a whopping 46 shots in this game.

They will now return home and go right back to work on Tuesday against the Isles.