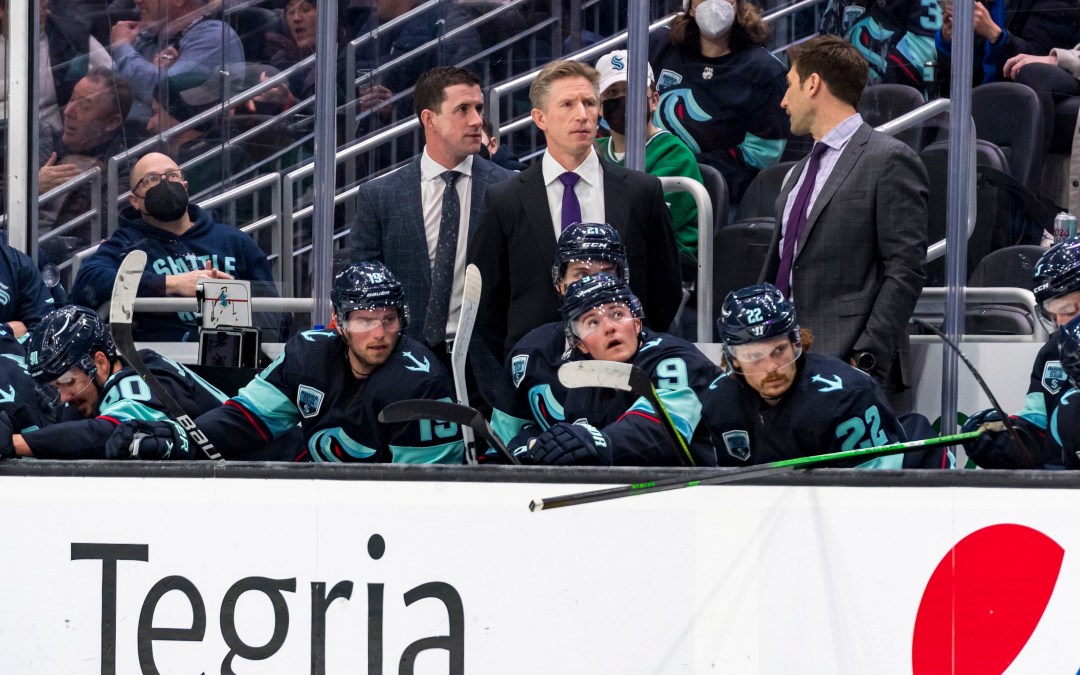 Hakstol’s philosophy: protect the house in the defensive zone

When the opponent controls the puck in the Kraken’s defensive zone, the coaching point shifts from aggression in the forecheck to protecting the slot from opponent possession and shots. The highest danger shots come from the slot, which is identified by the red box in the diagram to the right.

The imperative to protect the middle drives the Kraken’s personnel choices just as much as scheme. One can look to the frequent deployment of defenseman Jeremy Lauzon over Haydn Fleury as an indication of the type of defensive hockey Hakstol would like to play. Lauzon is limited in his offensive upside but is a sturdy, checking defender capable of keeping the slot clear when he is playing his game. He leads the team in hits by a wide margin despite significantly less ice time than others who are behind him in the category. Fleury, on the other hand, succeeds with significant skating and stick skill, but he can be boxed out at the net front at times.

One can certainly debate the overall wisdom of this particular personnel choice, but Hakstol clearly prioritizes Lauzon’s skillset to implement his defensive zone system. Even when talking about the Kraken’s most skilled offensive blueliner, Vince Dunn, Hakstol mentions the need for Dunn to be “hard to play against defensively” first.

Hakstol’s defensemen are there to manage the physical play in the slot. This is why the team assembled perhaps the most physically imposing defense group in the league. Combine this with Hakstol’s personnel preference for speedy and defensive-minded forwards to implement his neutral zone system and you can start to see why the inaugural Kraken were assembled as they were.

The defensive zone emphasis is evident in the data. HockeyViz.com does a phenomenal job of using play tracking data to construct heat maps that illuminate shot tendencies or production by positioning on the ice. The chart below shows the frequency of even-strength shots the Kraken have conceded to opponents when compared with league average. Darker blue means fewer shots and dark red means more shots. The Kraken suppress shots at an above-average rate in the center of the ice and do so with particular ruthless efficiency in the low slot, the highest-danger area of all.

This shot visualization reveals the philosophy and shows that the Kraken have done well accomplishing the ultimate goal, but how does Hakstol scheme it?

The Seattle Kraken play a 2-1-2 coverage scheme when the opponent has possession high in the zone (base positioning is shown in diagram 1 above). F1 and F2, commonly the wingers, are deployed high, with the two defensemen low and a F3, typically the center, based in the mid-slot area. Forwards can communicate and switch coverage positions based on exigencies of the play. Skaters will check opponents in their zone and rotate when the opponent overloads one side of the ice.

Seattle’s coverage is conservative when the opponent controls high on the outside. F1 and F2 move into shooting lanes to block shots but place less pressure on outside passing lanes. As play continues, the defense consciously collapses toward the slot to guard against set play passes into the slot or to the weak side, plays that are much more dangerous for the defense.

By employing this tactic, the Kraken are willing to concede and to some extent will invite long-distance opponent shots. Of the 21 goalies who qualify, Philipp Grubauer has faced the third farthest average shot distance of any goaltender in the league with at least 30 starts. Distance shots are inherently less dangerous, and the Kraken likely believe that by playing in collapsed coverage, they will be in position to collect and clear most rebound opportunities.

The downside of this conservative “protect the middle” approach manifests against teams that are willing and able to be patient in their puck possession game. The conservative coverage can concede extended possession, particularly when maintained by an opponent cycling the puck. Defensive zone time can mount, tiring the defense. As the zone time increases, the likelihood of a coverage breakdown or defensive penalty increases, whether due to exhaustion or a defensive player losing his position or his angle to block a pass or shot.

When the opponent moves the puck low, the Kraken condense their coverage toward the side of the ice with the puck but prioritize keeping at least one defenseman in front to cover a pass into the slot.

Depending on the offensive set, this modified coverage can leave a player below the goal line unchecked with possession for short periods of time and allow the opposing player to initiate a low-to-high play along the boards or another offensive set. But the point of this coverage is to prioritize denial of a pass to the front of the net for a high danger one-timer from the doorstep.

When the opponent moves the puck low, the Kraken condense their coverage toward the side of the ice with the puck, but prioritize keeping at least one defenseman at the goal front to cover a pass into the slot.

In diagram 4, where the play does not go quite as low and the threat of a continued strong-side cycle remains, the coverage defenseman and the middle layer forward will move down to pressure the puck, while the weak side defenseman moves to the front of the net to protect against passes into the low slot.

In the clip below, before the Panthers establish themselves in the offensive zone, you can see another example of the Kraken’s aggressive 1-2-2 neutral zone forecheck (discussed in part 2) and the risks of that approach when faced with a skilled possession opponent.

Once the Panthers have control in the offensive zone, you can see how the Kraken’s collapsed coverage scheme denies close interior opportunities. The Kraken skaters cycle with an offensive player in their coverage area when high in the zone, but a defenseman shifts to protecting the front of the goal when the opponent dips below the goal line.

Is the scheme effective overall?

On one hand, the Kraken have conceded 3.22 goals per game, sixth most in the league. This is quite poor, obviously. On the other hand, per TopDownHockey’s stats (via JFreshHockey), the Kraken defense is in the top ten in both suppressing shot volume, measured by total shots, and shot quality, measured by expected goal value per shot. When combined, the Kraken defense is yielding shots worth only an expected value of 2.25 goals against per game, third best in the league. Per Evolving Hockey, the Kraken rank a bit lower but are still eighth best in expected goals against per game. In percentage terms, the Kraken have allowed opponent shots yielding expected goal value at 10 percent better than league average, per HockeyViz.

These advanced analytics suggest that the Kraken defense is working. Opponents are getting fewer shots, and, crucially, the shots they are getting tend to come from lower value positions on the ice.

Yet, the disconnect from the real world results is alarming. No team has a larger differential between goals against and expected goals against in the league. Potential explanations for this differential include quality of the goaltenders’ play, bad luck on shots, and/or flaws in the advanced analytics.

While the analytical models are hardly perfect, and the Kraken may very well have “luck” problems this year, there is no disputing that the quality of the goaltender play has been a major factor here. Despite forcing shots to the outside (as displayed in the HockeyViz visualization at the beginning of this post), Kraken goaltenders have the lowest aggregate save percentage in the league.

To the extent we’re talking about goaltender performance, it is difficult to pin that responsibility on Hakstol’s defensive system. To the contrary, since Grubauer had been strong at stopping shots from distance during his Vezina-nominated final season in Colorado, you could talk yourself into the conclusion that the Kraken starter was a good “scheme fit” for Hakstol’s collapsing, protect-the-house approach. It has not worked out that way so far.

All that said, this is not intended as predication. Goaltender performance is notoriously hard to predict, and the goaltending has been trending up.

In part 4 of the series I will examine how Hakstol designs the team’s transitions out of the defensive zone following an unsuccessful opponent dump-in and what the Kraken do when they win the puck in the defensive zone.